Unique to Okinawa and often referred to as the Ryukyuan cuisine, traditional Okinawan cooking incorporates local ingredients, cooking methods, customs, and various other aspects of local life. At its root lie feelings of gratitude toward the climate and natural resources of the islands, the spirit of treasuring the ties and bonds within the family, relatives, and community. It has influences from both Japan and China, and also other countries and regions that the islands enjoyed relations with during its long history. It’s challenging to strictly classify and define the Ryukyuan cuisine that evolved through the history and fusion of various influences. however, we can broadly divide the cooking into the “court cuisine” and “local fare.” These two are the foundation of the Ryukyuan cuisine that supports the food culture Okinawan people have proudly passed down through generations.

For about 450 years from 1429, Okinawa was an independent kingdom known as the Ryukyu Kingdom. Many royal events and ceremonies, such as banquets to entertain the Sapposhi investiture envoys from China and officials the Satsuma Clan of Japan sent to the Ryukyus, were held at the Shurijo Castle and other locations in the kingdom. In these official gatherings, the cooks at the royal court introduced various types of dishes, cooking techniques, and methods, which, over time, developed into the court cuisine. Later, the court cuisine spread among the upper-class families, and after the abolition of the Ryukyu Kingdom and establishment of Okinawa Prefecture, to commoners from the Meiji era onward (1912~). At the same time, the cuisine developed further. Such historical background makes it difficult to separate and classify court cuisine and commoners’ cuisine. 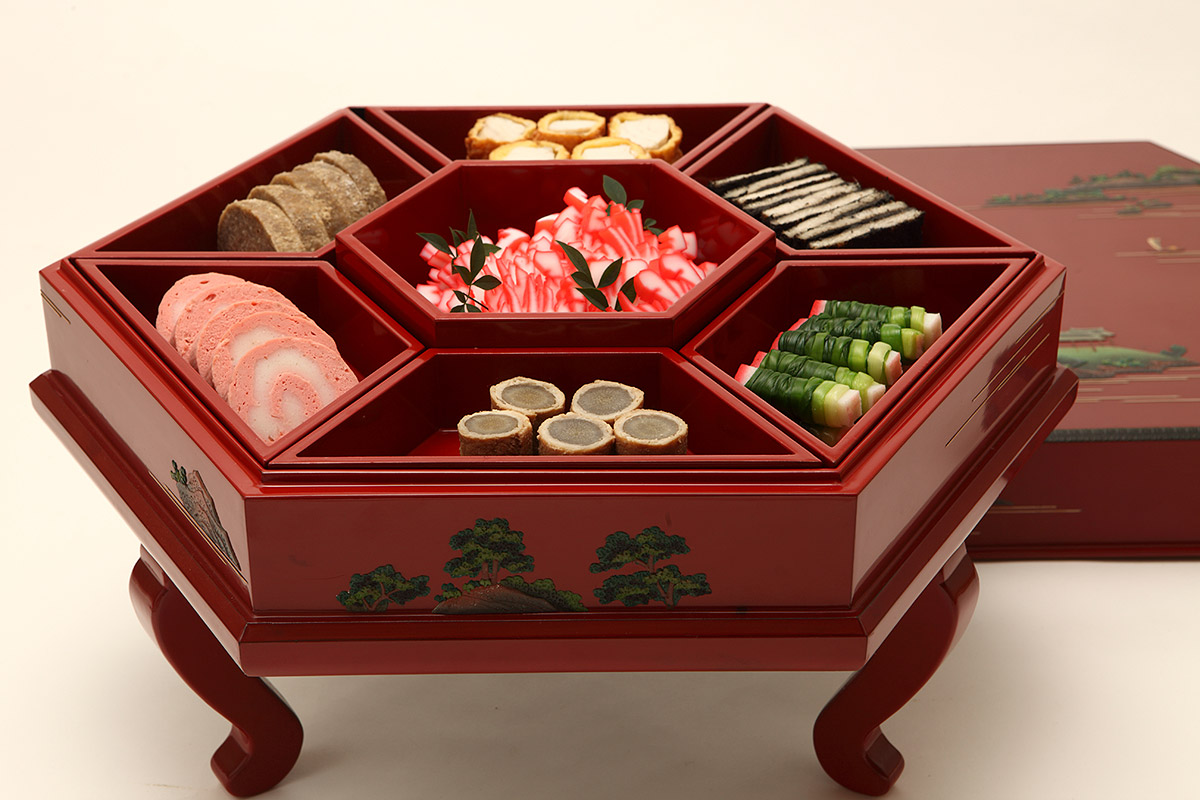 The “Tundabun” is a significant part of serving classic court cuisine and one of the best-known pieces of “Ryukyu Shikki” or lacquerware. The “Tundabun” trays of various shapes and sizes contain several different dishes, from a square (5 dishes) to hexagonal (7 dishes), octagonal (9 dishes), and round. The colorful and beautiful foods prepared to be tasty even when cold, were served in the small compartments of the “Tundabun.” These trays were presented to each of the guests. The dishes included “Hana-ika” (flower-shaped squid), “Minudaru” (steamed pork in black sesame sauce), “Kamaboko” fishcake with mustard greens, “Gunbomachi” (burdock root wrapped in roasted pork), “Kutinpura” (small tempura), deep-fried “Tanmu” (Taimo potatoes), “Shishi Kamaboko” fishcake, “Hanbin” fishcake, “Urachiki Chinuku” (fishcake stuffed mushrooms), “Konbu Maki” (fish wrapped in kelp), “Suchiki” (salt-preserved pork), and “Biragaramachi” (fishcake with miso wrapped in green onion), among others. The word “tunda” is written with the characters meaning “eastern road.'” Chinese historical records refer to the name of this special tray in the manuscipt “Lord of the Eastern Road.” The meaning behind it is thought to express the act of a house master welcoming and offering hospitality to guests. Thus, the “Tundabun” embodies the heart and spirit of Ryukyuan “Utuimuchi” (hospitality). 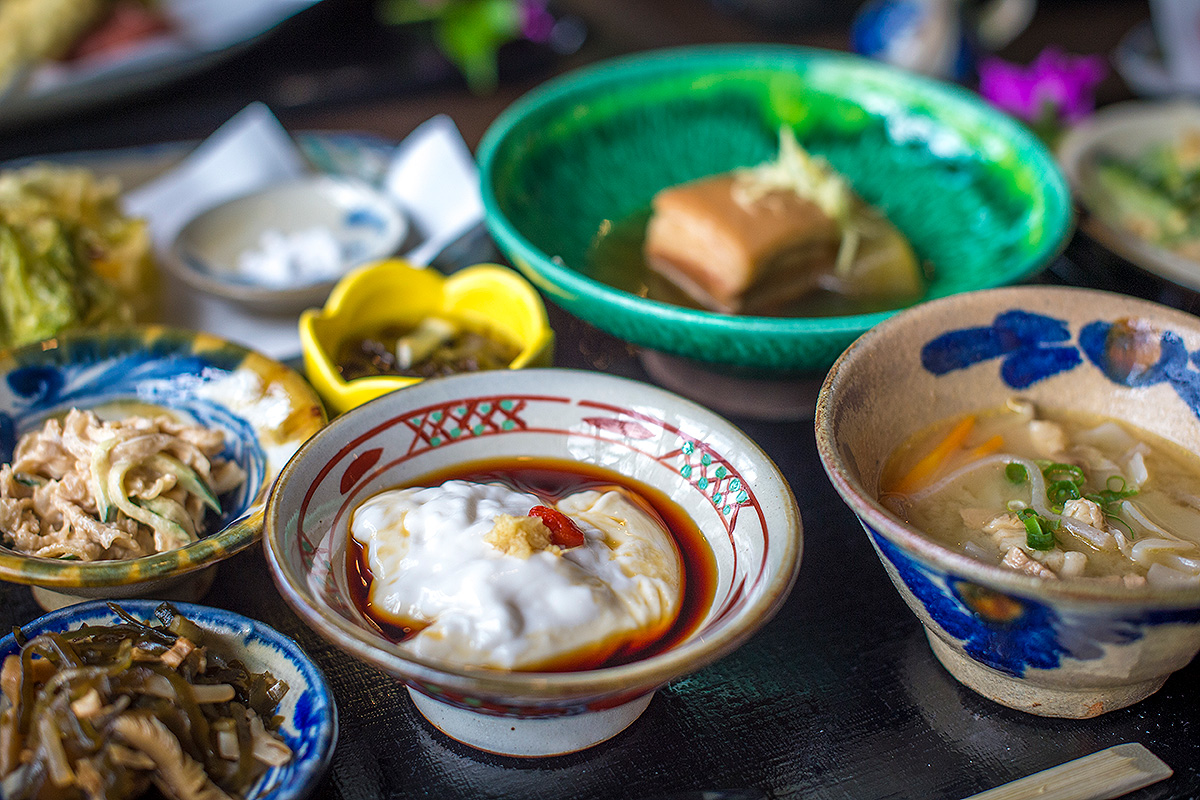 The combination of the Okinawan climate, which is different from mainland Japan, and the wisdom gained through daily life, created the unique cuisine of the ordinary people. They gathered ingredients from the surrounding seas and their fields that were used effectively by stir-frying, stewing, squeezing, and steaming. Expressions like “Kusuimun” (medicinal diet) and “Nuchigusui” (medicine for life) refers to the Okinawan diet that is nutritiously balanced and based on the philosophies of “Ishoku Dogen,” a belief that daily diet has a direct link to good health and well-being.

Okinawan people’s everyday cooking combines cooking and ingredients for a balanced diet in dishes like “Champuru” stir-fries and simmered “Nitsuke.” Despite having faced food shortages during the immediate postwar years and through the years when the US administration influenced heavily on the availability of ingredients and style of cooking, the ways of preparing meals among the locals have remained mostly unchanged and continue to this day.

Okinawa’s food culture is widely credited for contributing to the longevity of its people. It’s also a fact that the existence of this traditional food culture is in danger amidst the rapid changes of recent times. Facing these challenges, Okinawa Prefecture is making several efforts to nurture successors to carry on its unique and distinctive food culture. These include programs to deepen the general understanding of the historical and geographical background and the origins of ceremonial dishes and the containers they were served. The participants to these efforts also acquire knowledge and skills to inherit the cooking methods and tastes. They nurture and engage in dissemination of the culture, and they also receive a certificate of the “Successors of the Ryukyu Culinary Tradition.”

When visiting Okinawa, we hope you will enjoy Ryukyuan cuisine, and through this enjoyment, support the preservation, advancement, and succession of Okinawa’s unique food culture that was shaped over its long history, through exchange with various countries, and in the lives of the local people.