In Okinawa, the farm products traditionally used in home-cooked meals are affectionately referred to as shimayasai, or island vegetables. These vegetables grow in the unique soil of Okinawa, exposed to the sun and sea wind. They are antioxidant-rich and contain many minerals. You can pick them up at supermarkets or a farmers’ market. The vegetables are an indispensable part of Okinawan cuisine. 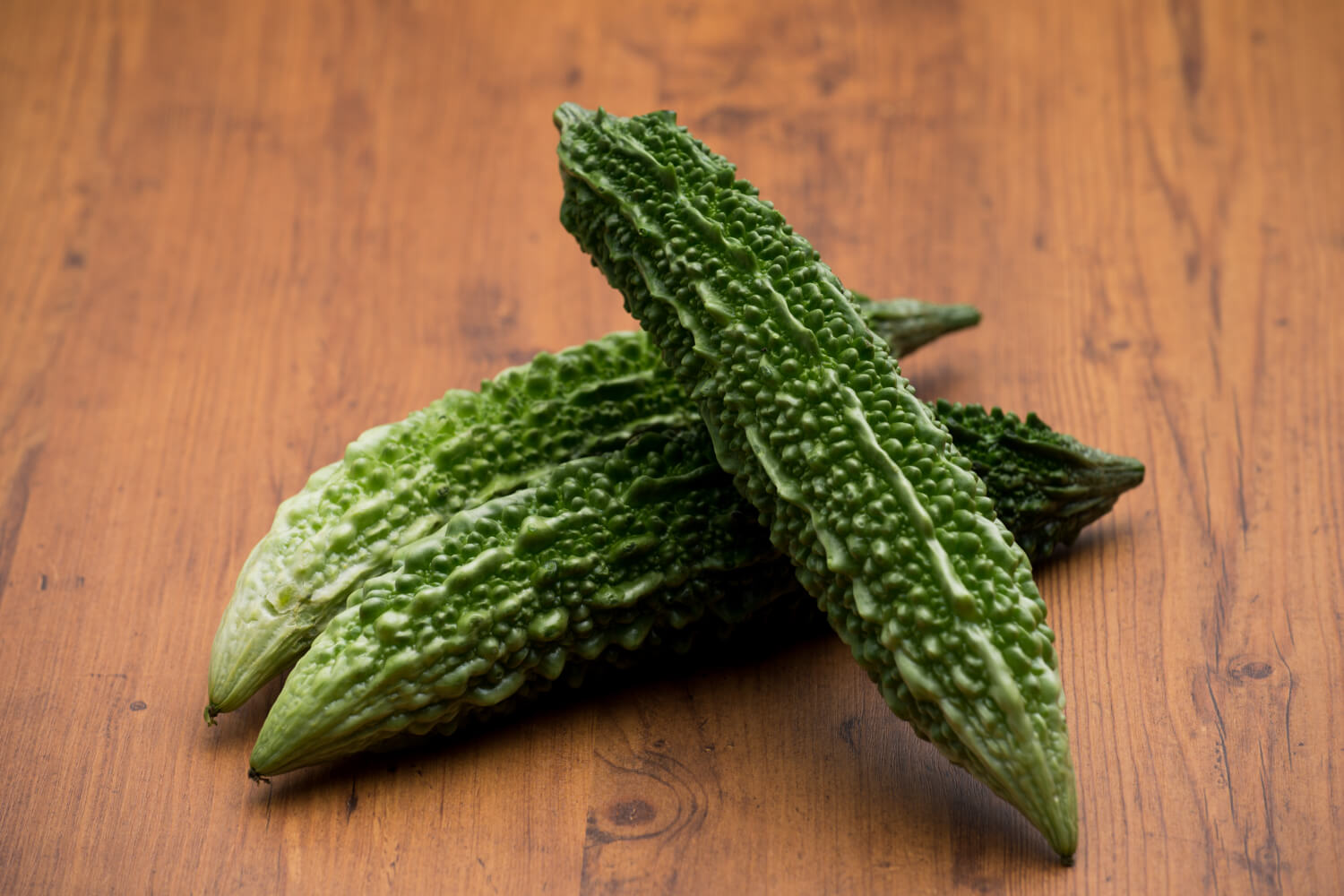 “Goya” is the king of summer vegetables in Okinawa (Japanese name: Nigauri). Characterised by its unique bitterness, this vegetable is harvested throughout the year but production increases throughout spring and summer. The bitter ingredient momordicin stimulates digestion which improves appetite, and it also contains four times the amount of vitamin C than a lemon which does not reduce even when heated. 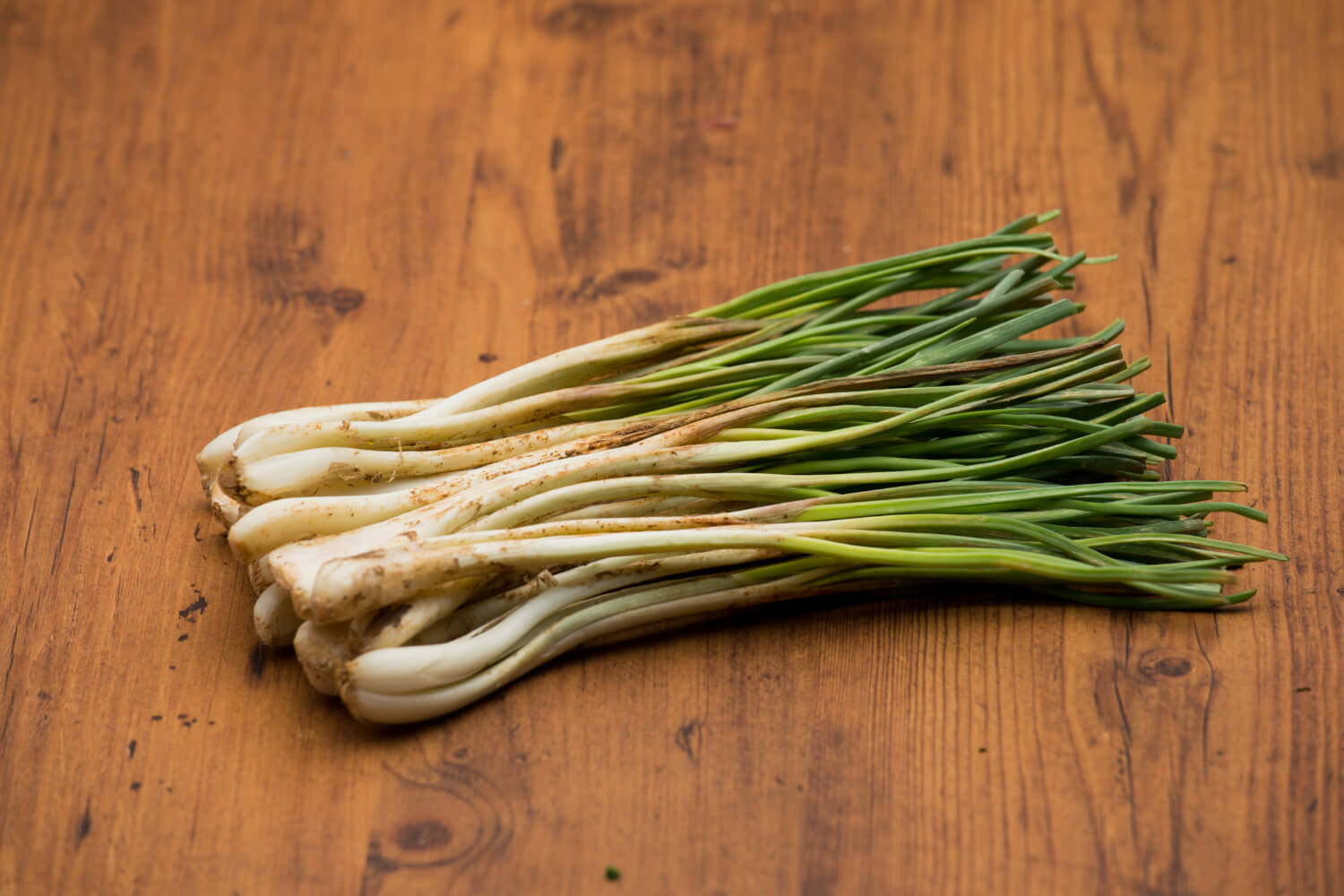 The biggest features of shima rakkyo are its strong smell and salty taste. It is smaller and softer than food produced on the mainland and is often pickled or fried for use in a wide range of dishes. What attracted the attention of shima rakkyo was when a local TV commercial introduced shima rakkyo tempura,and after that its popularity soared with many restaurants adopting it into their menus.

In Ie village located in the northern part of the main island, the soil is well drained and so the vegetable can be planted even further into the ground. This means that the edible white part can grow even longer.

Although there are many places where this crispy texture and rich taste can be enjoyed, Shima Rakkyo produced in Ie is Okinawa’s most well-known secret.

Known as “papaya” in Okinawan dialect, this vegetable is used in a variety of dishes including chanpuru, soups and stews. Said to aid recovery after giving birth and improve breast milk, it has long been known as an ingredient recommended for mothers immediately after giving birth. It is also a healthy Okinawan vegetable that is rich in enzymes, helping to break down all three of the major nutrients. 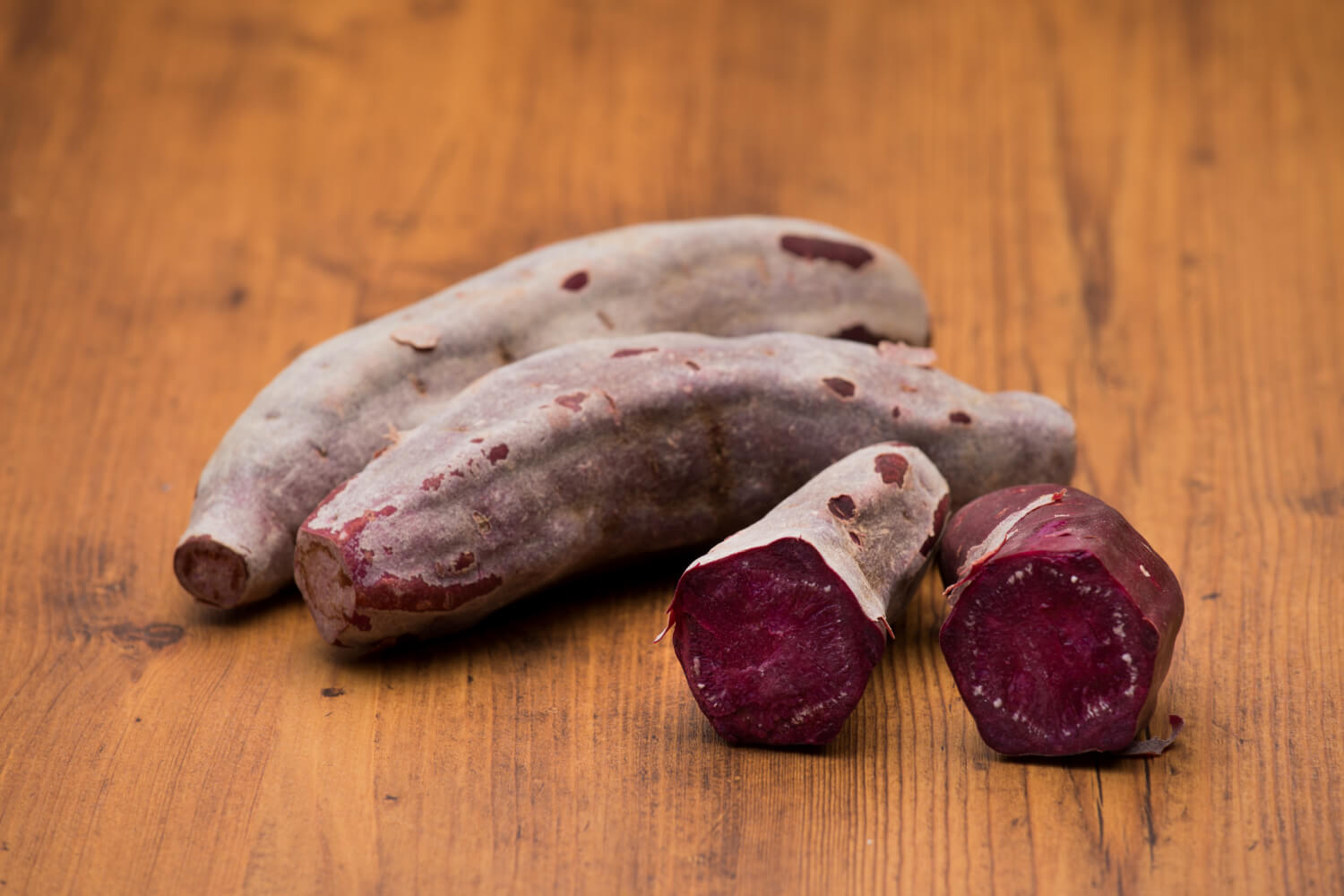 The sweet potato has a vivid purple color, a sticky texture and a refined sweetness and is delicious whether it is steamed or fried. In recent years, this Okinawan vegetable has gained in popularity as not only is it full of vitamins and minerals, but it also contains anthocyanin.
The sweet potato is eaten 4 or 5 days after being harvested, and as the water content drops the sweetness becomes more concentrated making it even more delicious. 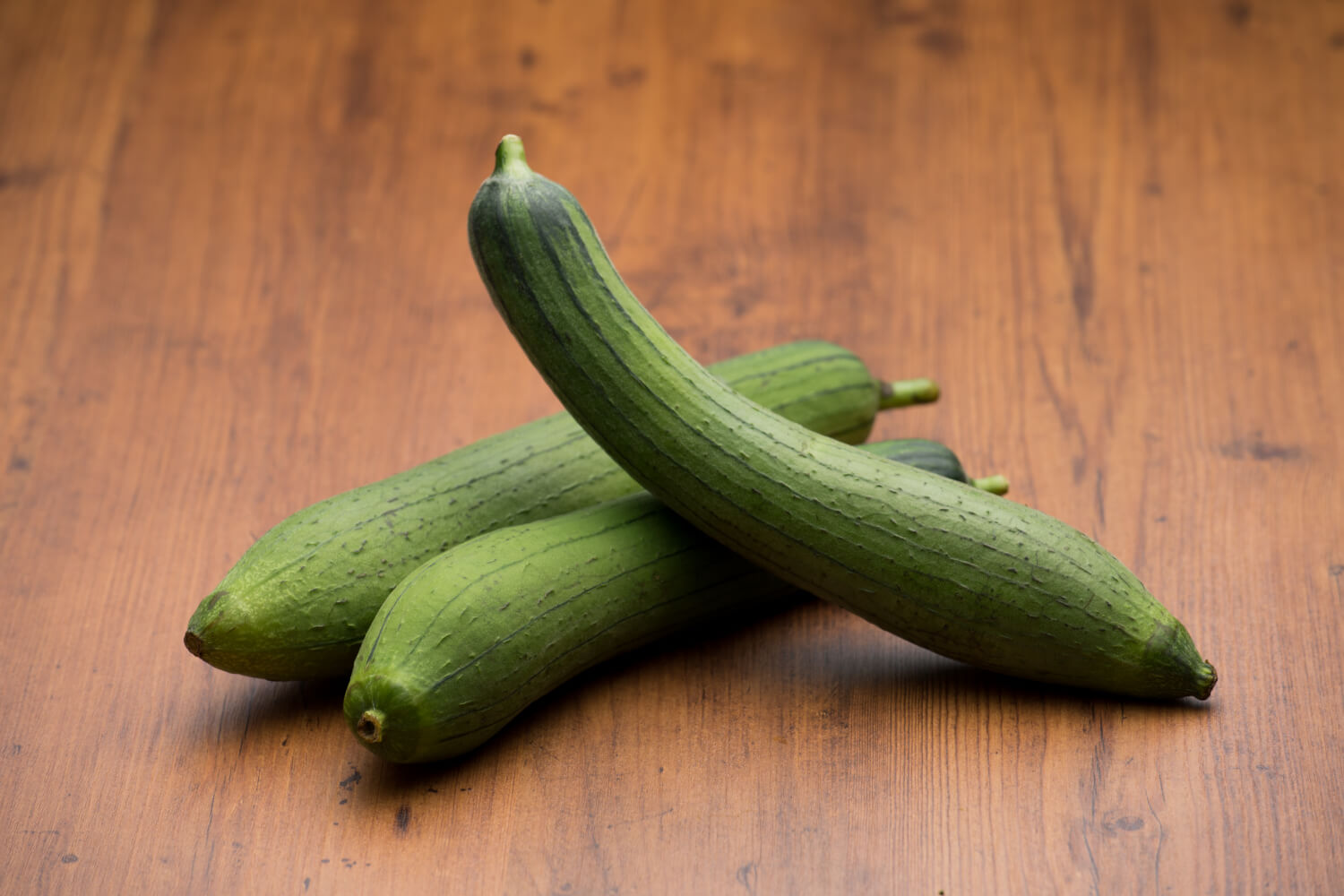 Alongside Goya is the classic summer vegetable, “nabera”, or a sponge cucumber (Japanese name: Hechima). A popular recipe is “Nabera N’bushi” which simmers the vegetable in miso, and it is also good in soups and stir-fries. It contains potassium and carotene, and is said to have a diuretic effect. It is also used in cosmetics, such as lotions and sunburn care. 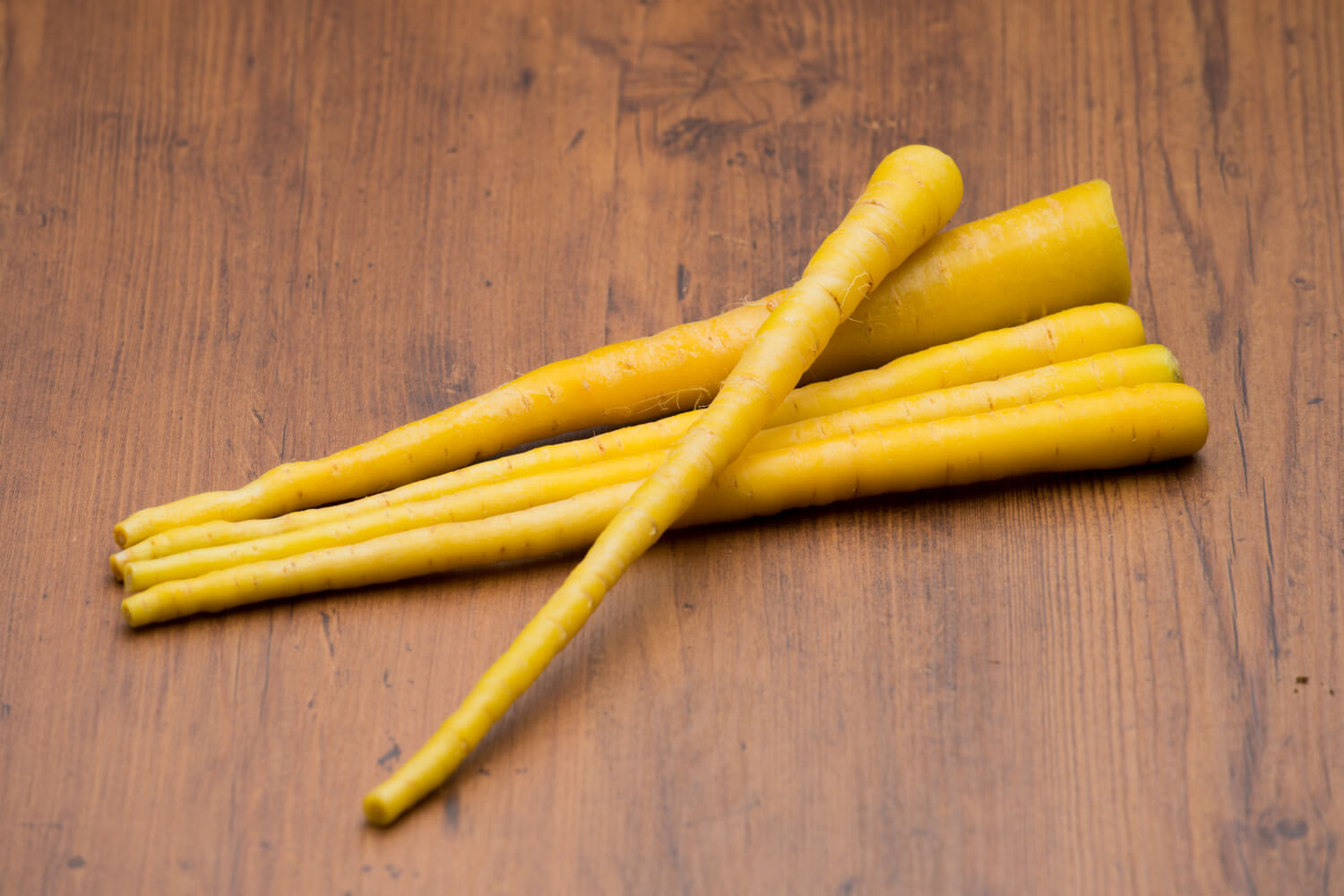 Okinawan carrots are also known as “chidekuni” which means “yellow radish” in Okinawa dialect, and they are rich in carotene and pectin making them a useful nutritious vegetable that gives the body strength. They are mainly produced in Nakagusuku and Itoman.
Seasonal period: Early November to late February 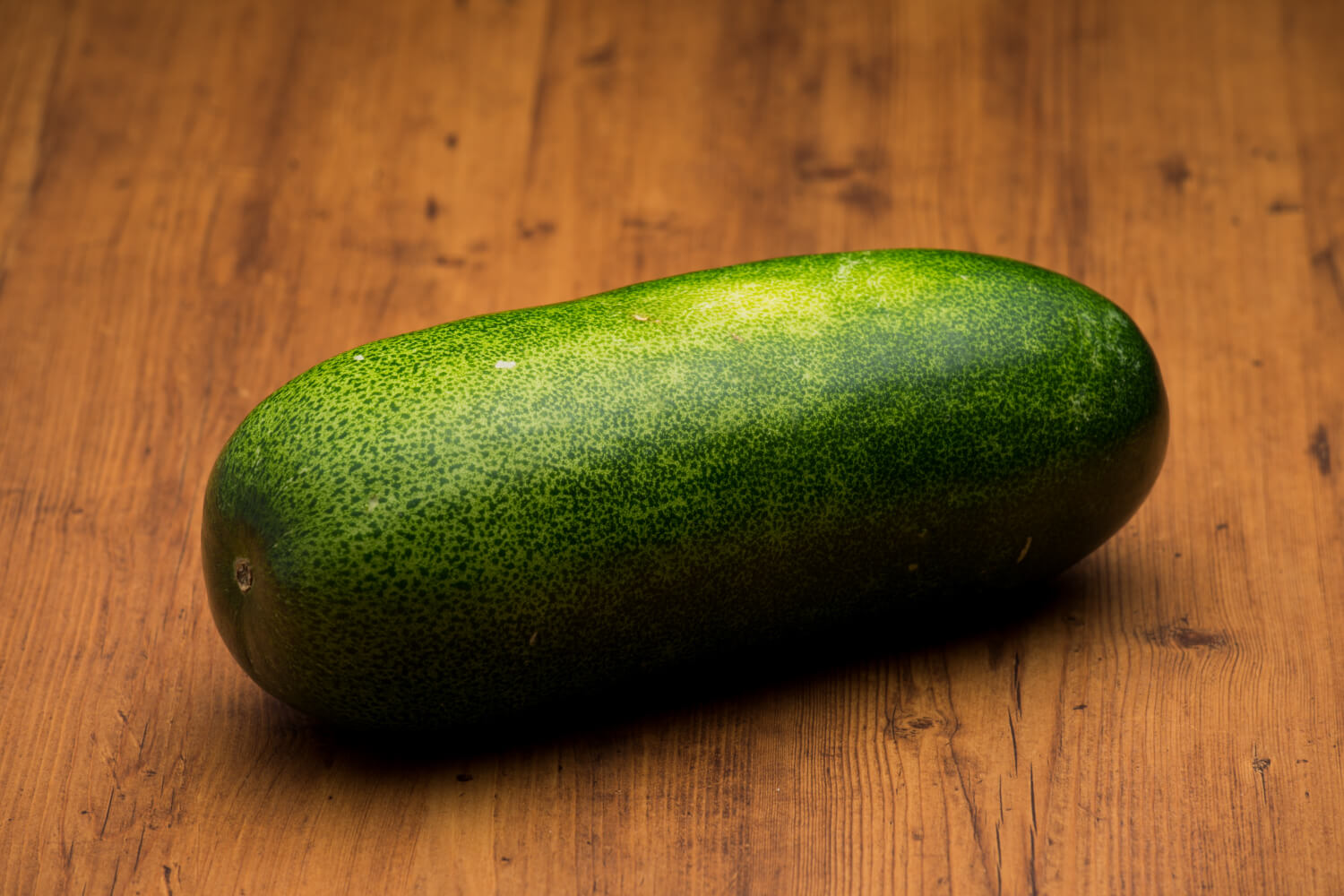 Known as “Shibui” in Okinawa dialect, the winter melon is a vegetable that welcomes summer but can be preserved until winter, hence its name.

Its refreshing taste makes this perfect for soups and stews, as well as tasting great with meat and fish,and often appears on family dining tables during the hotter months due to its high vitamin C and water contents.

It is also used in China as a digestive aid, and has recently gained popularity as a diet food due to its low calorie count.

Peak harvest time is around April to June.

Produced mainly in the southern areas of the main island, 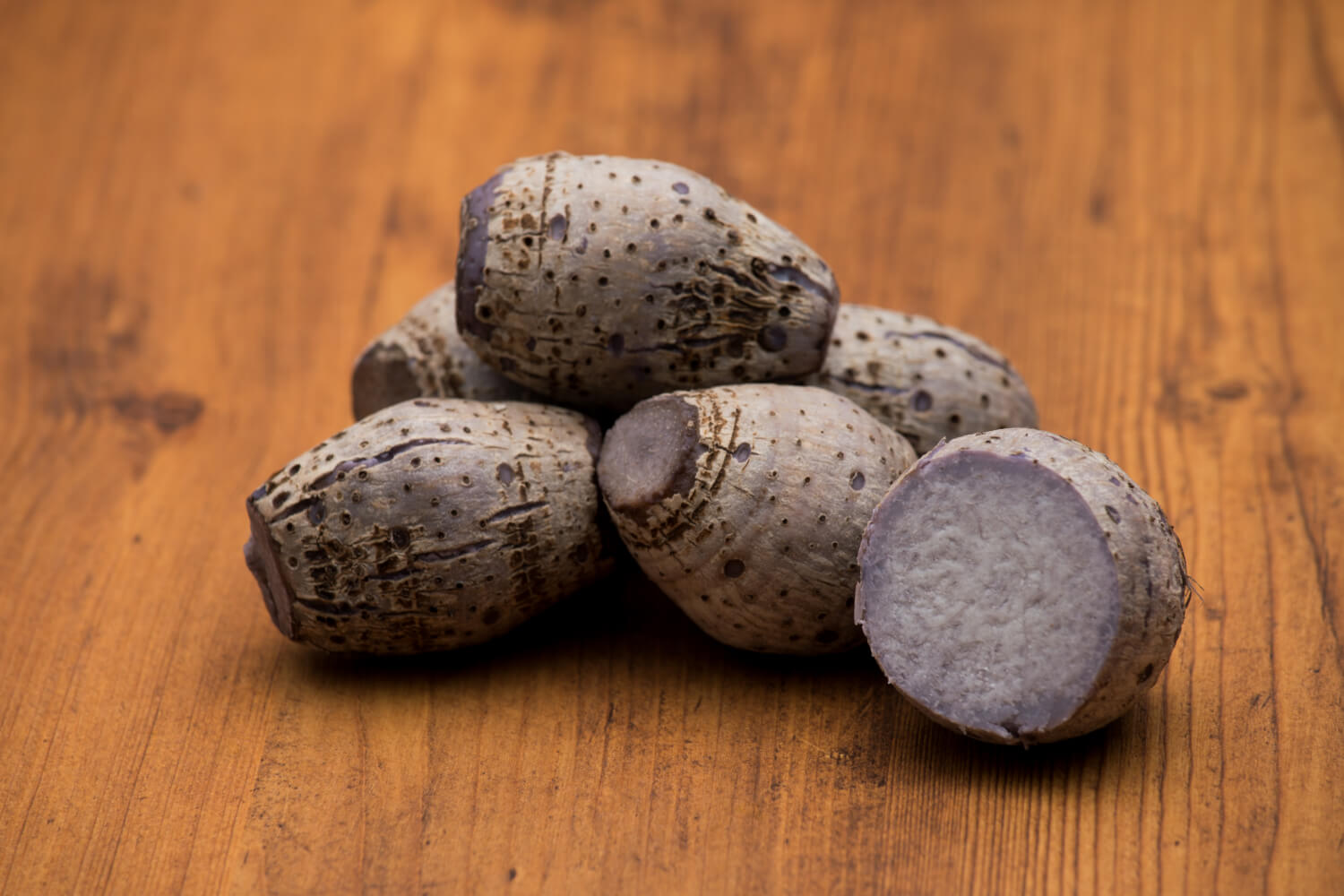 Taro is rich in starch and contains potassium, calcium, iron and vitamins, and because it goes off quickly when left uncooked it is steamed before being distributed. The main production areas in the prefecture are Ginowan and Kin. 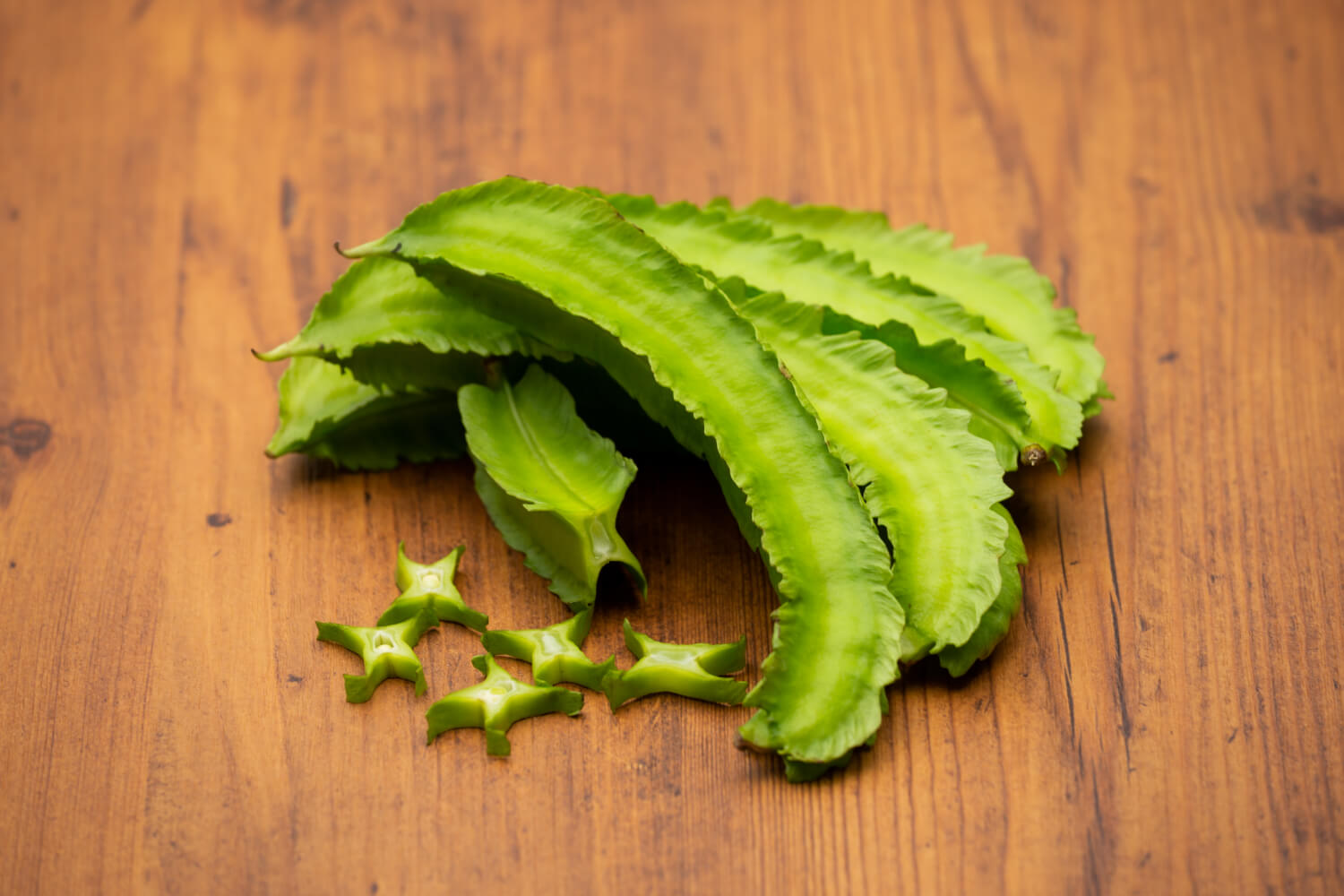 The square cross section inside the pod with frilly ridges is what gave this vegetable its other name, the “four-cornered bean”, and it is usually harvested while young and soft and eaten like a bean.
The winged bean is full of vitamins and minerals, and not only is the pod edible but the leaves, flowers, stem and seeds can also be eaten. The nutritional value of rhizome is also ten times the amount contained in soybeans, and ingredients removed from heated beans are gaining popularity as ingredients for beauty products. 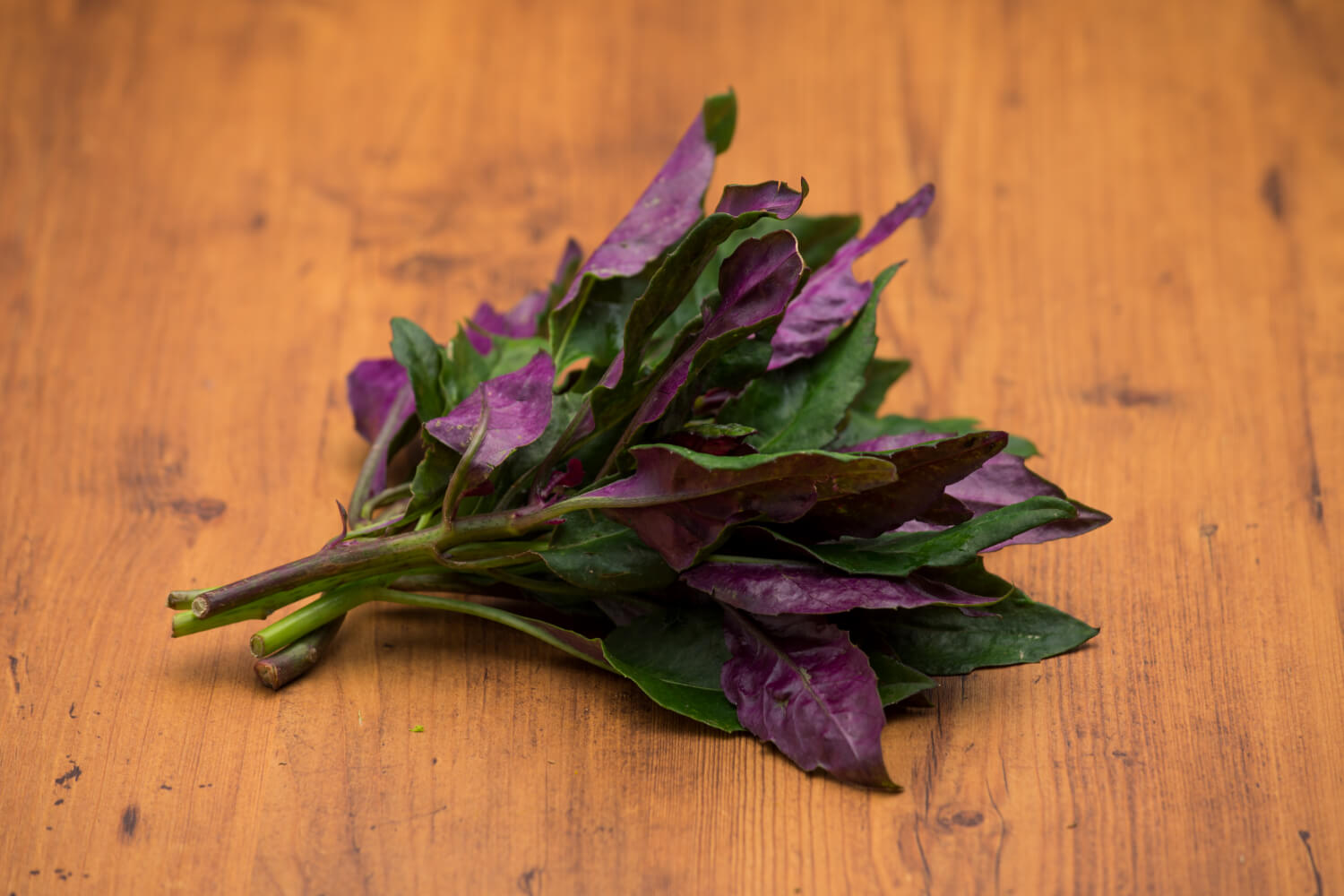 The front and back of handama leaves have different colors.

Crunchy when eaten raw, this vegetable turns soft and moist when heated allowing you to enjoy two completely different textures. It tastes great in a pork stir-fry and can also be used in a wide variety of other dishes, including miso soup and tempura.

It has long been known as a “blood medicine” in Okinawa, and it is said to be effective against anaemia due to its high quantity of vitamins, magnesium and iron.

The purple color of its leaves is also remarkable and is caused by anthocyanin, a type of polyphenol.

It has been grown in Okinawa since ancient times and is harvested from winter to early summer. 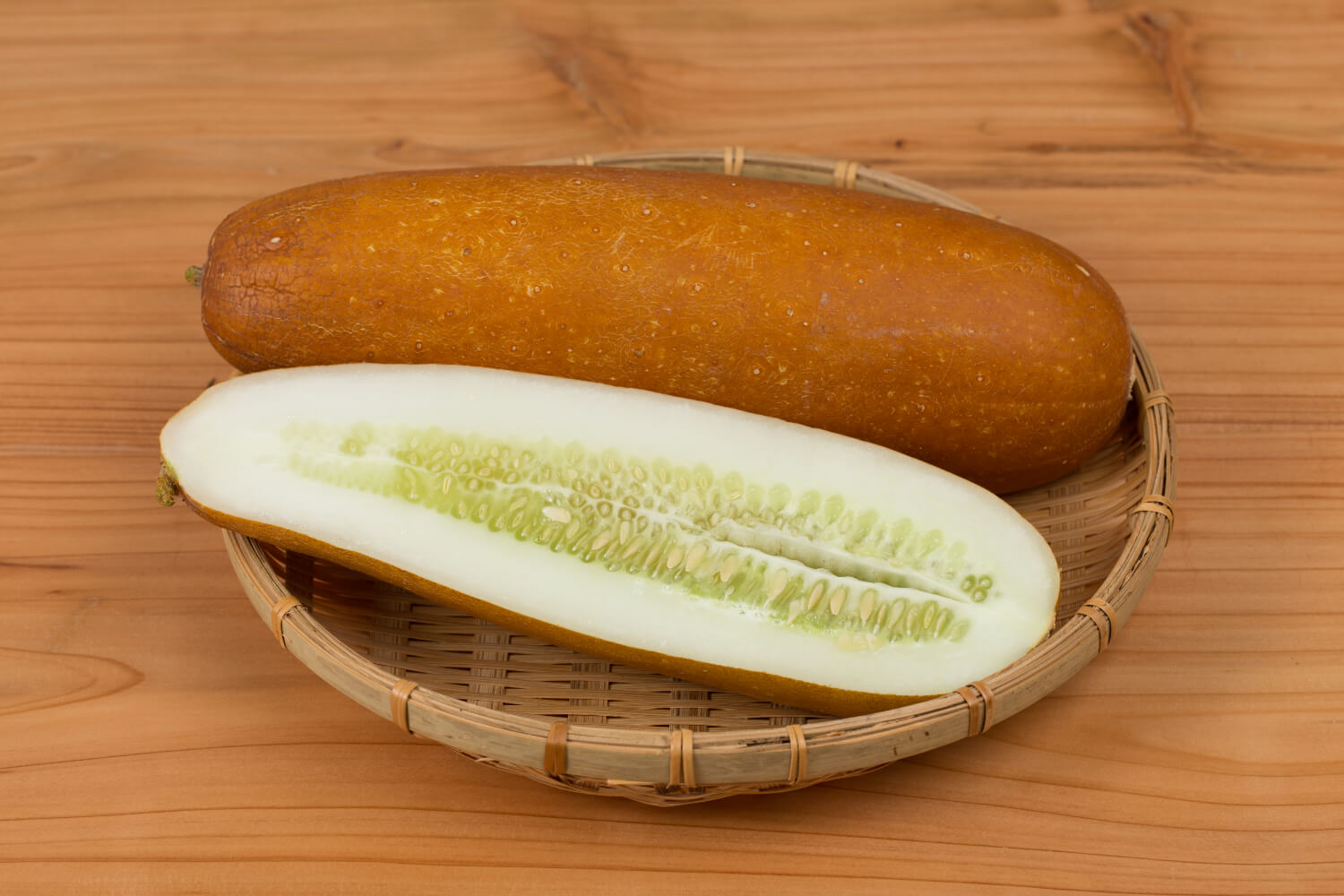 This vegetable is also known as the Japanese pickling melon, and is generally produced in Nara. The flesh is white and has a light taste resembling that of a cucumber. In Okinawa, it is often eaten pickled or in Japanese cuisine, and is used as an ingredient to ease swelling and thirst due to its high water content and the potassium and vitamin C it contains. 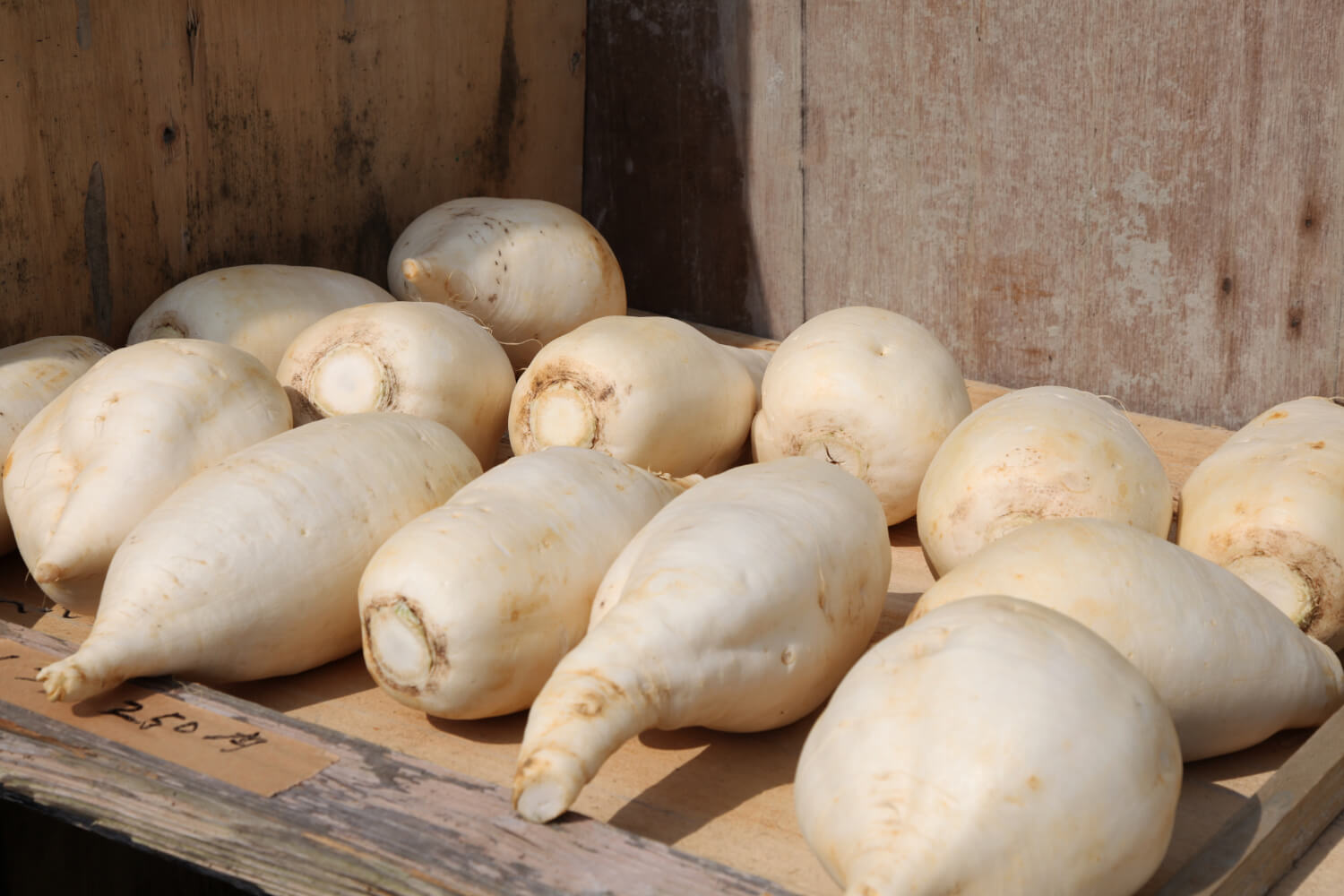 Okinawan daikon is native to Okinawa and characterized by its large size and strong sweetness. Even when cooked, it does not fall apart and it absorbs flavors well. Kunigami, Ogimi and Nakagusuku are the main production areas. 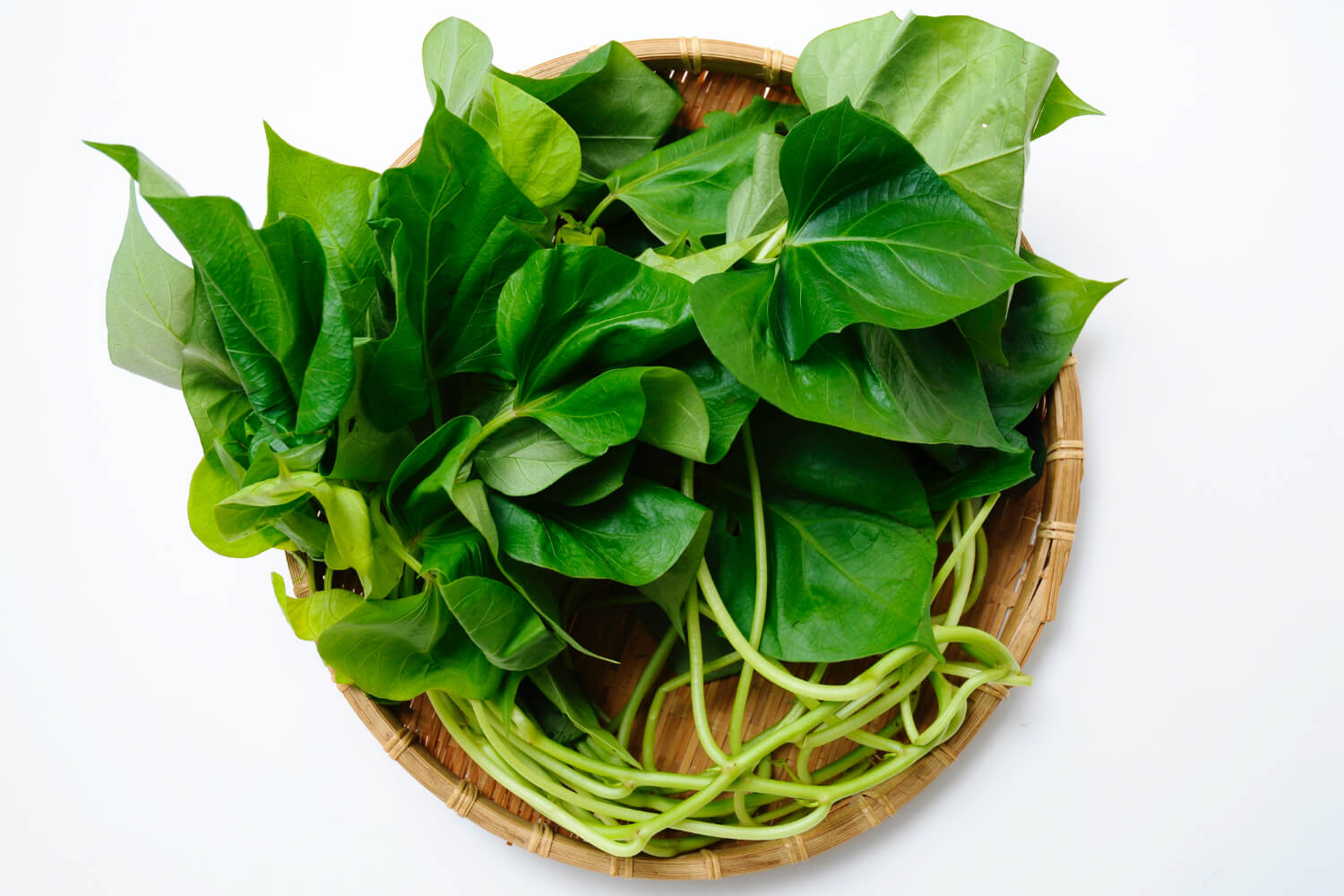 Kandaba is the leaf part of a potato, and has been used as an Okinawa vegetable since long ago. Okinawa is often affected by typhoons and so often the damage to crops is great, and it is because of these difficult times that islanders came to eat kandaba to relieve hunger and starvation.
The heart-shaped leaves are useful in relieving upset stomachs and also have high nutritional value. The Okinawa Prefectural Agricultural Research Center have created new varieties in order to make this healthy vegetable easier to eat. This includes the new Okinawan vegetable, “Gushichan ii-na”, which is soft with no smell, and also has a nice crisp texture on the stalk that connects the leaf to the stem. A wide variety of dishes can be enjoyed with this vegetable, including stir-fry, salads, tempura and smoothies. 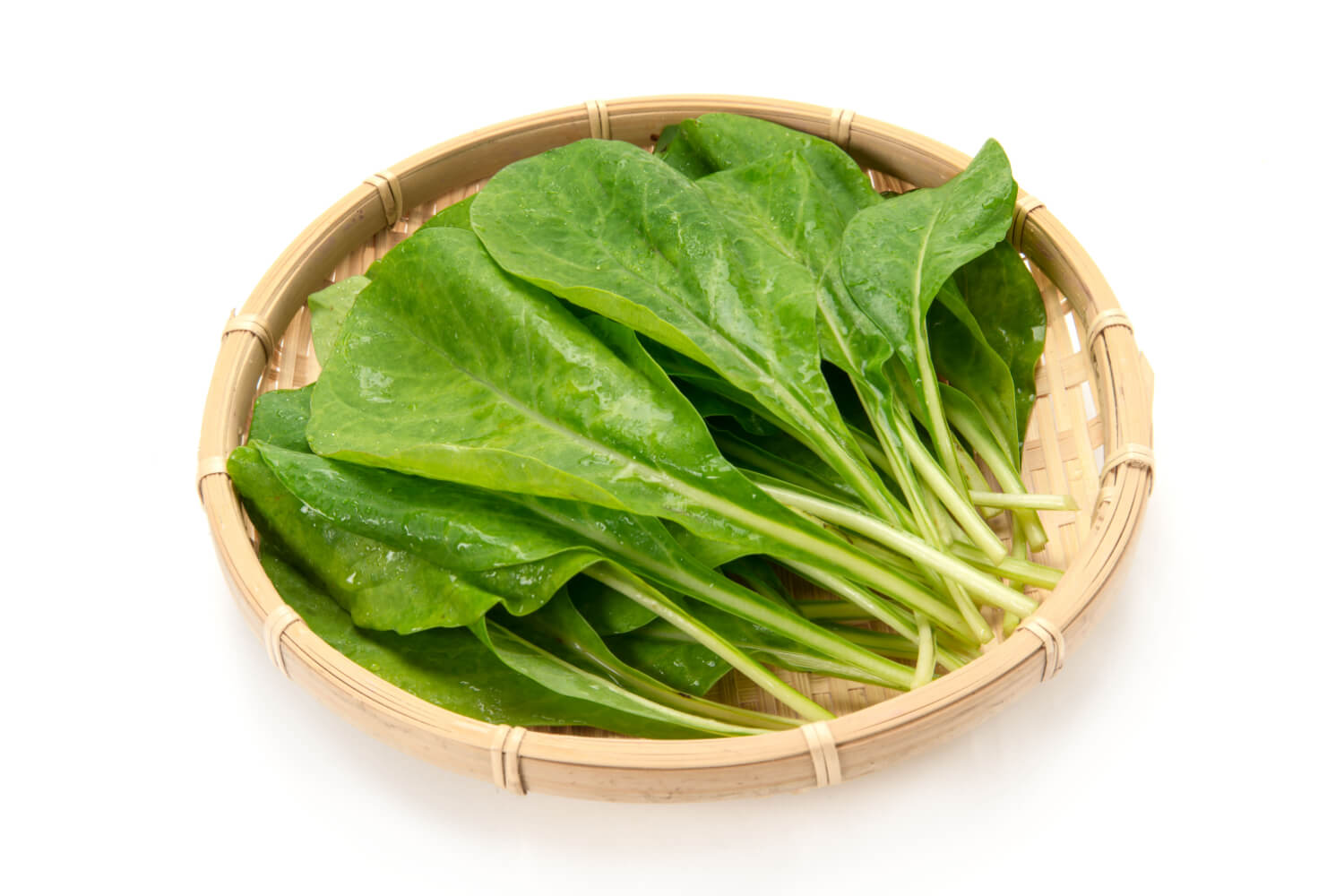 Nigana, or Ixeridium dentatum, is a member of the sunflower family and has been eaten for its health benefits since the Ryukyu Dynasty, containing high levels of vitamin C and calcium. Nowadays it is used to accompany soups, and is also popular chopped finely with Okinawan tofu or fried as tempura.