The waters around Okinawa are an abundant source of seafood

The creatures of the blue and expansive waters around Okinawa are characteristically colorful and unique in their appearance. They can be eaten in many different ways, including boiled, fried, and as sashimi.
We definitely recommend that you experience the tastiness unavailable anywhere outside the tropical islands of Okinawa. 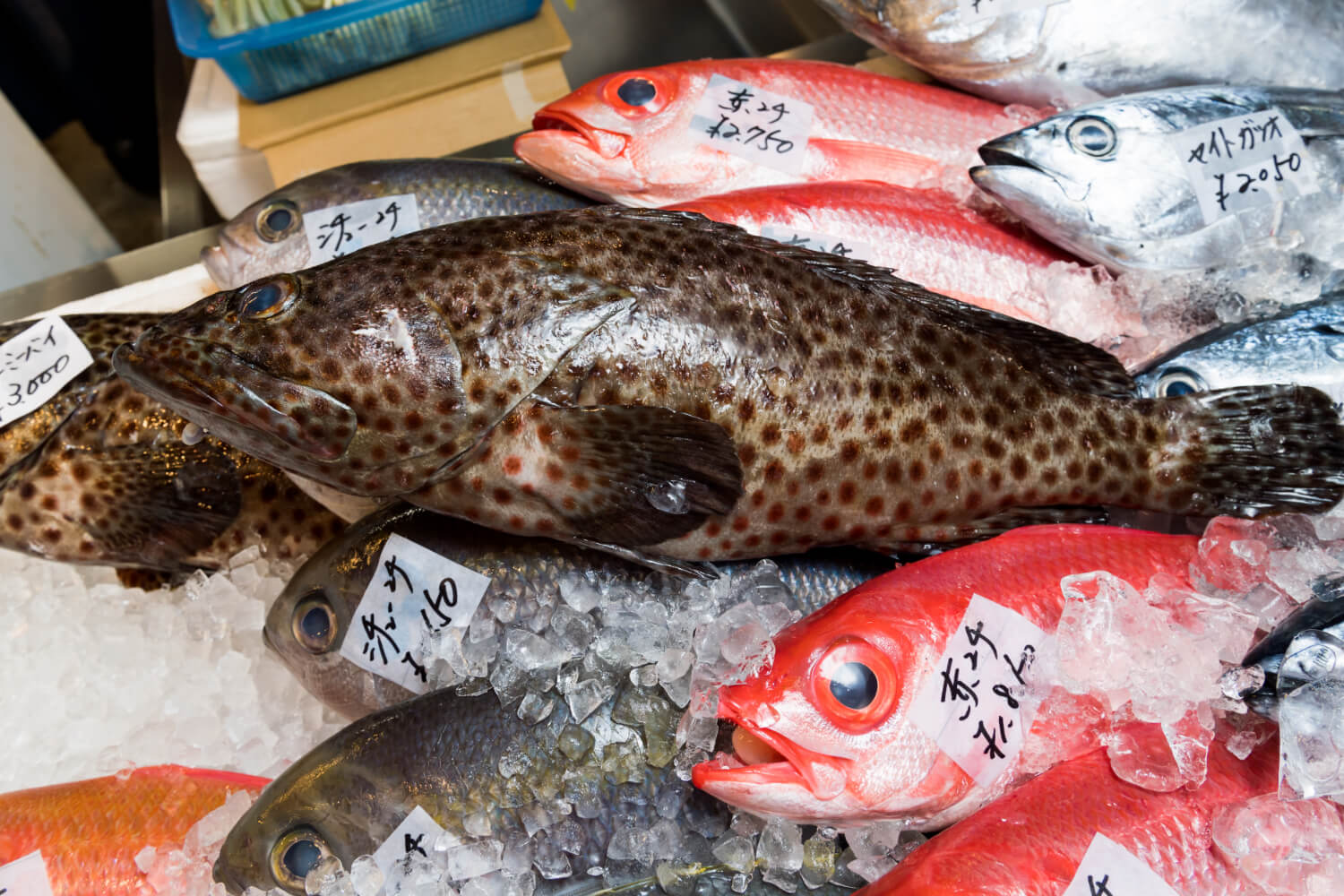 Known as “mibai” in Okinawan dialect, many varieties of grouper live in Okinawa’s oceans surrounded by coral reefs. In Okinawa, farming of the malabar grouper species has flourished, and its elegant white meat and flavor go well with various Japanese, Western and Chinese dishes. Comparable to no other natural produce, this fish is shipped alive in sea water. 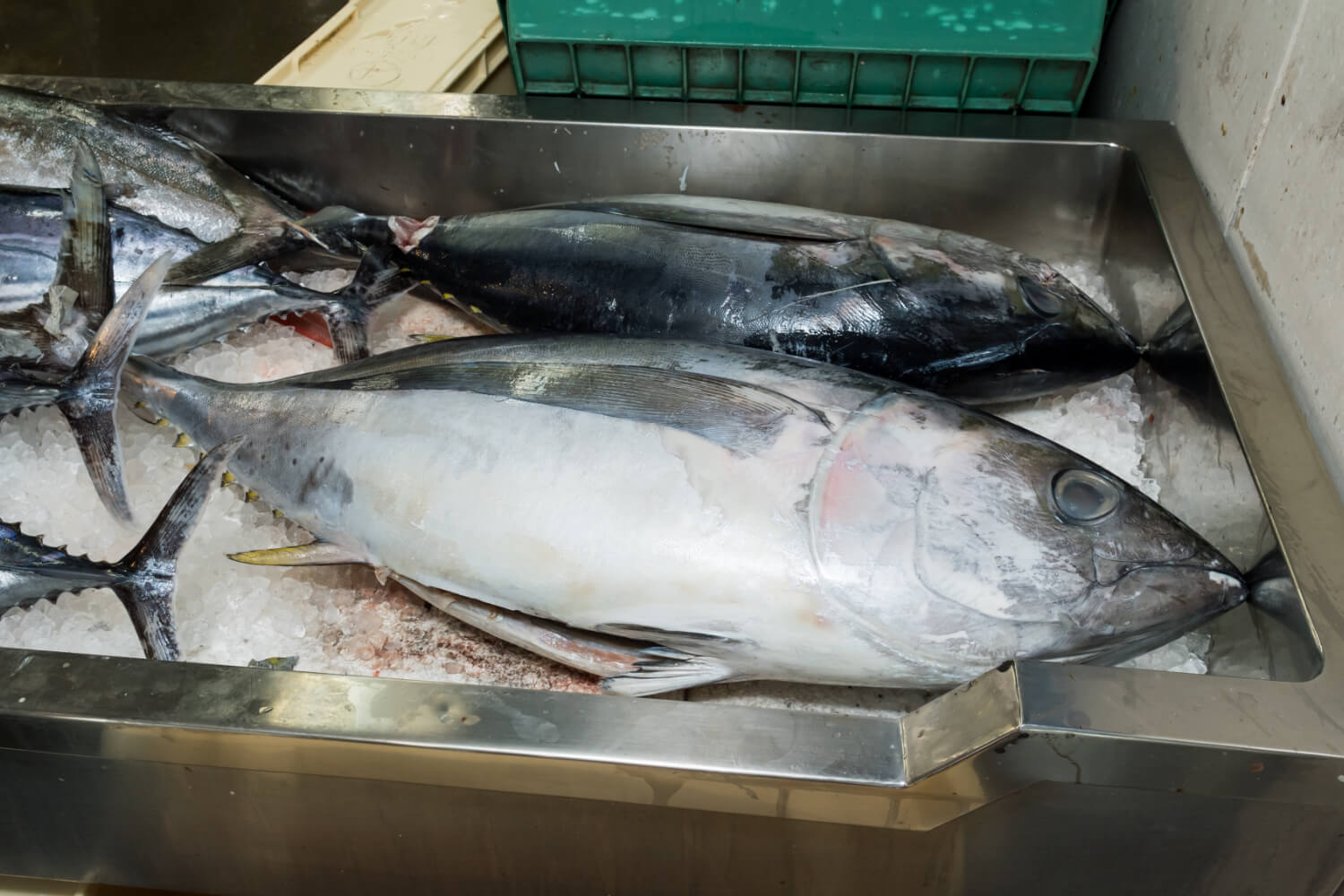 Tuna farmed in the prefecture is characterised by the refreshing taste of its lean body, and accounts for half of the total amount of fish and shellfish caught in Okinawa. Depending on the season, there are various kinds of tuna ranging from Bluefin to albacore. Fresh tuna has a good color and shine, with tender meat and a clear lean body. It also contains lots of DHA and EPA which is useful for brain activity. 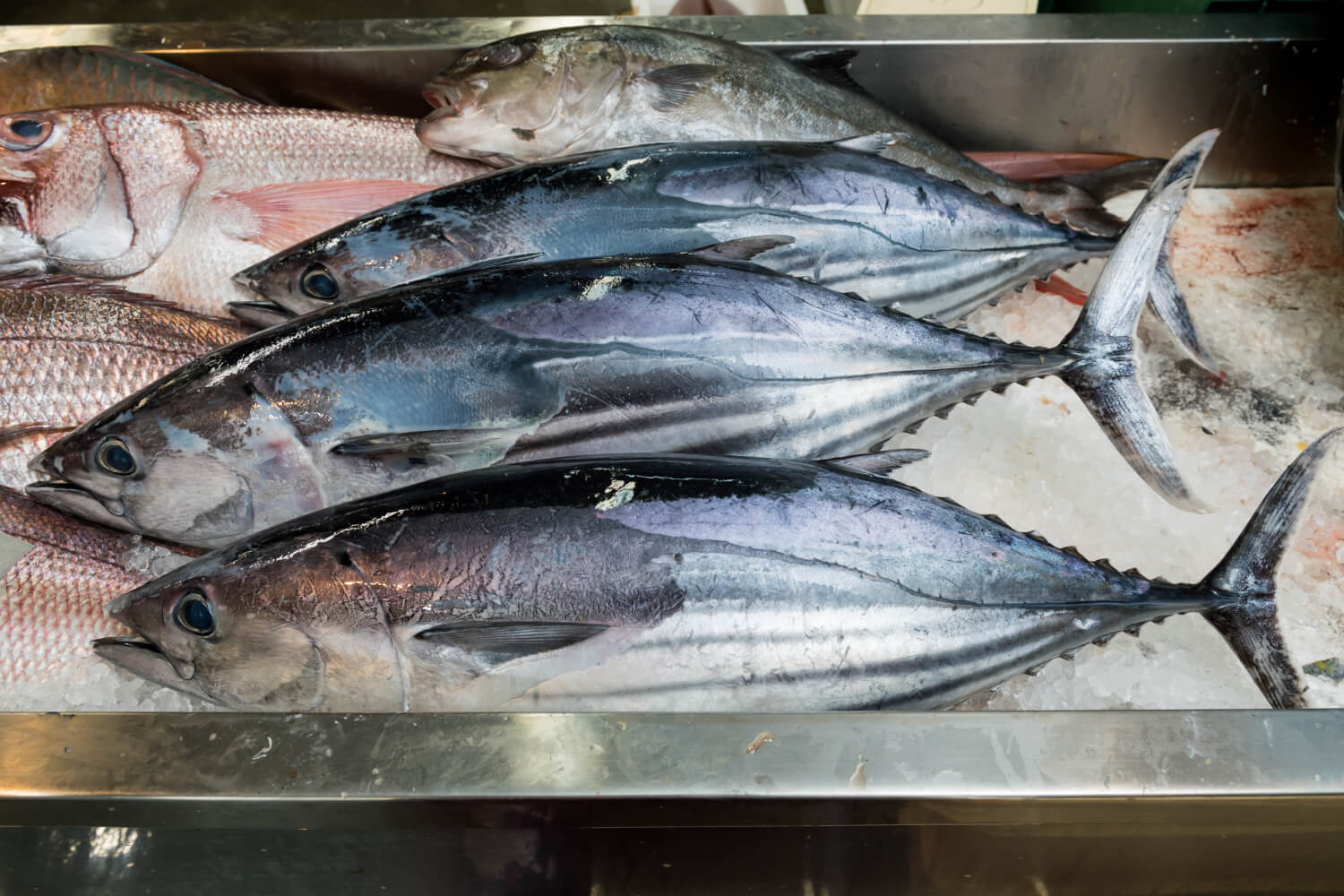 Skipjack tuna is an important ingredient in Okinawan cuisine, used in dishes such as soups and chanpuru, a type of Okinawan stir fry. Okinawa does not only consume the most skipjack tuna in the whole of Japan, but it is also first to announce the arrival of summer, with the first bonito of the season. Motobu, Ikema island, Irabu island and Sarahama Port are all famous for their tuna, with over 100 years of farming history. Fished between the end of March and October, it is usually eaten as sashimi or tataki and flavoured with spices and ‘ponzu’, a type of bitter orange juice, or dressed in vinegar and miso.

This lean fish is rich in EPA (eicosapentaenoic acid) which acts as a natural blood-thinner as well as DHA (docosahexaenoic acid) which helps keep the brain active. It also contains vitamins B and D, being classed as one of the top fish for vitamin B12 which is contained in the fleshy part, as well as having many other health benefits in preventing hypertension, arteriosclerosis, anaemia and diseases caused by lifestyle. 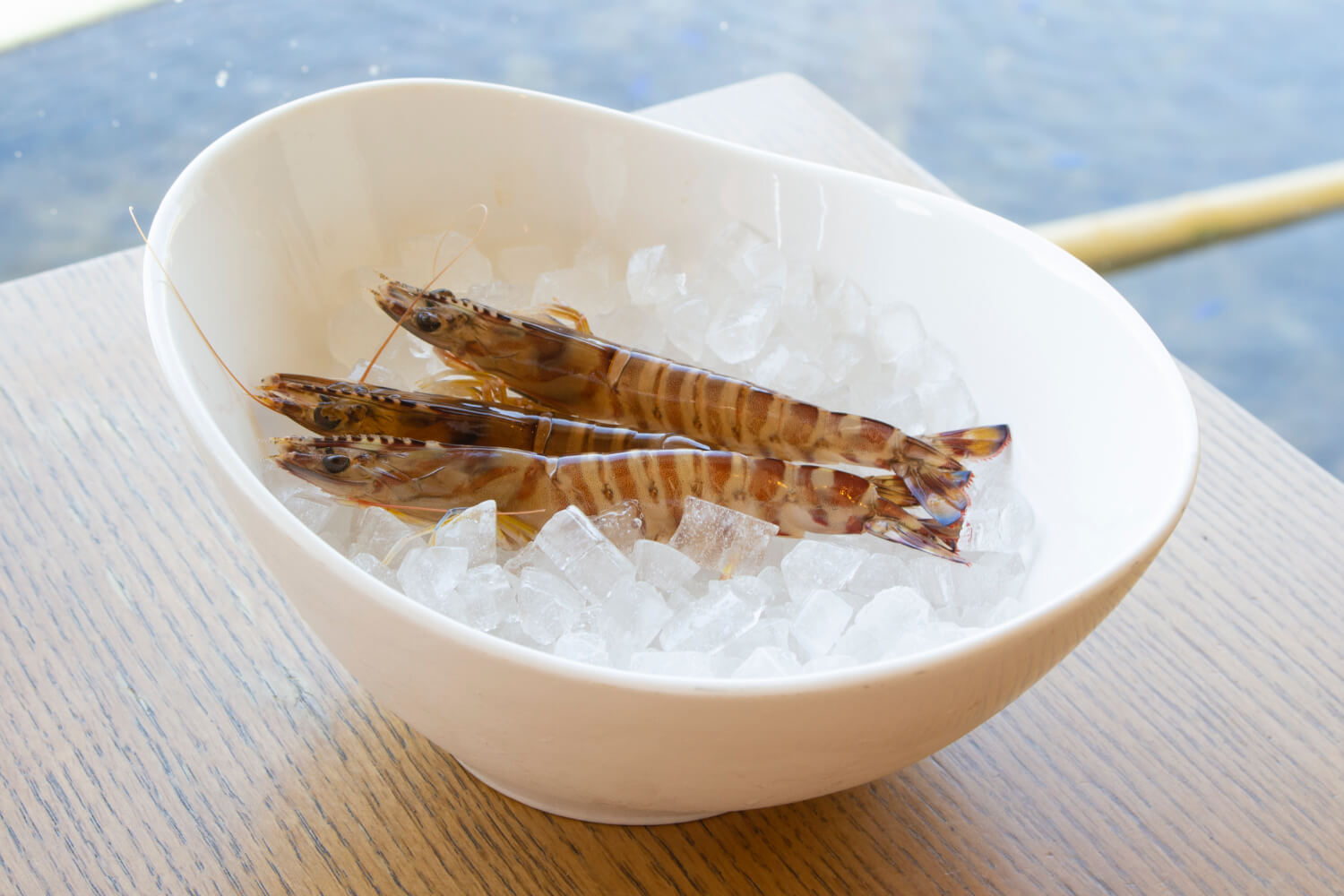 Sweet and tender, the Japanese tiger prawn is a joy to eat. High in protein and low in fat, it is recommended to eat the prawn whole as the body contains taurine to help lower cholesterol while the soft shell contains calcium. Okinawa produces the best tiger prawns in Japan, and although Kume Island produces the most, it is also farmed in Nanjo, Ginoza, Miyakojima and Ishigaki Island. In Kumejima, located about 100 kilometers west of Naha, sea water rich in minerals can be taken from the ocean to aquaculture farms, where deep sea water is used to raise small prawns. The nutrition they absorb from this water means the prawns are raised in good health, strong against illness and viruses with antibiotics hardly ever being used.
The prawns are bred for about 5 months starting in early summer, and become a seasonal food in winter. Although expensive, they are readily available to try in Okinawa. Tiger prawns can be eaten raw or in sashimi due to their outstanding freshness, and because they become sweet when heated, they are also popular in fried dishes and tempura. 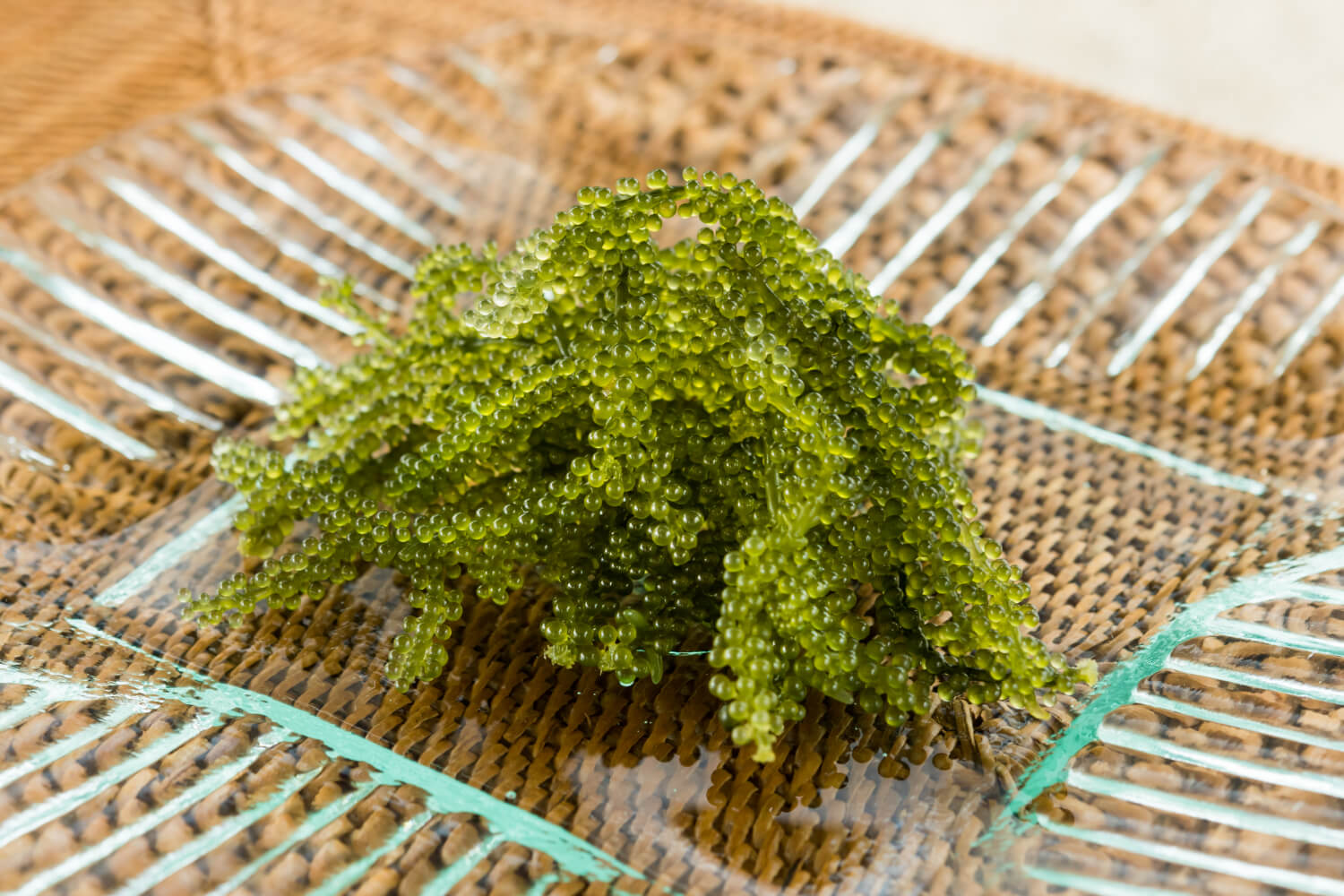 Also known as green caviar, sea grapes are a popular food amongst tourists which come in small bunches of round grains. They have a delicious popping texture that explode, giving a great taste as soon as they enter the mouth. They are also low in calories and rich in vitamins and minerals, grown all over the prefecture and shipped nationwide as a special product.

Onna village in the northern part of the main island is the main area that produces sea grapes, and sea water containing plenty of minerals is taken offshore to grow them. They take 70 days to grow in winter and only 30 in summer, and the ones with large grains are harvested by hand, one by one.