Karate is known as Heiwa no Bu, the Martial Art of Peace, and is practiced by more than 130 million enthusiasts around the world. Karate will make its first appearance at the Tokyo 2020 Olympic Games, and the karate world continues to expand. In this article we return to Okinawa, the birthplace of karate, to discover the essence of Okinawa karate, its history, and its continued development.

The Heart and Principles of Okinawa Karate

“In karate, never attack first.”
“Hit not. Be not hit. Avoiding conflict is the fundamental principle.”
“Never forget, karate begins and ends with respect.”
Looking at the wise words of the masters of Okinawa karate, it is clear that karate is an art of peace, and decency. Karate training is a way to develop sophisticated martial techniques hidden in the kata, but it also focuses the mind, to live life following a path of peace and dignity. These deep timeless principles are shared by practitioners of karate around the world. The way of karate has universal value, and transcends the boundaries of different styles from traditional karate to modern sport karate. 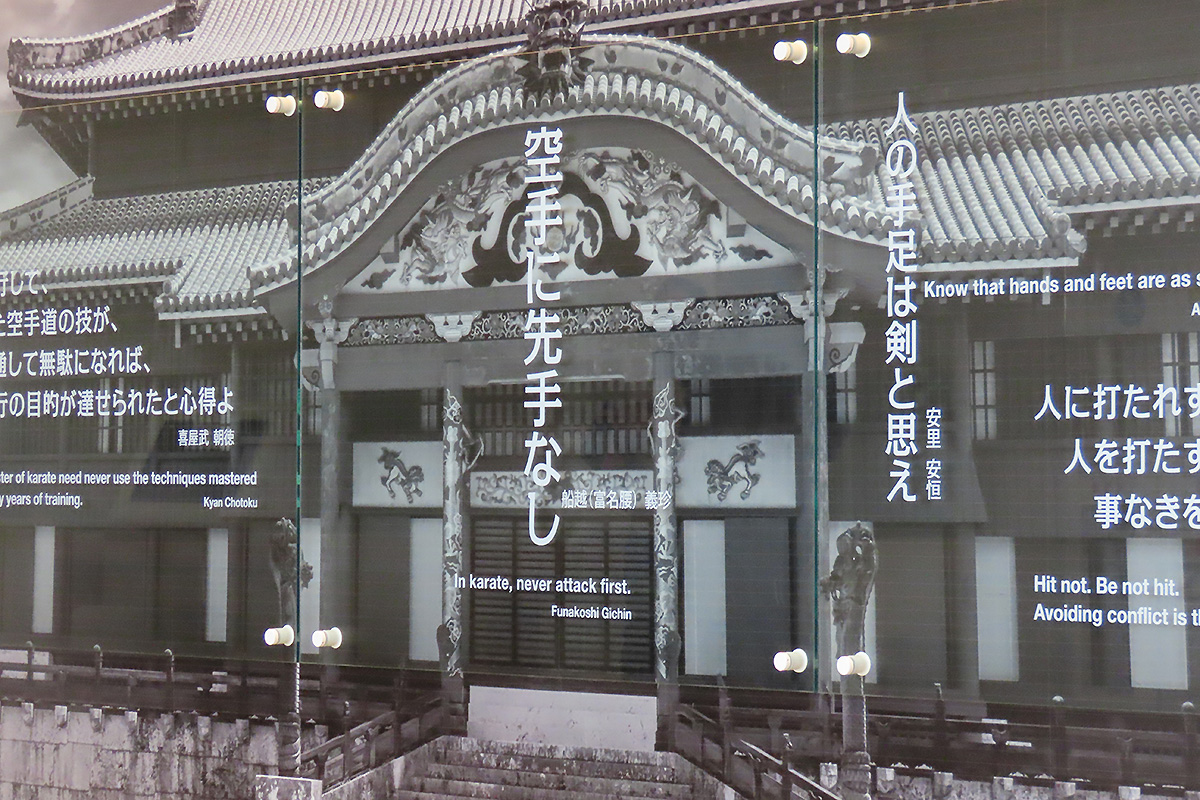 The Path of Okinawa Karate History

For 450 years from 1429 to 1879, the islands of Okinawa formed an independent Ryukyu Kingdom. The kingdom found great success as a bridge between nations. It traded with neighboring countries, and the various influences blended and evolved to form the unique culture of the Ryukyu Kingdom. Karate is one aspect of this culture, although its early development is unclear due to the lack of historical documents. It is possible, however, to summarize a general history of karate from its birthplace in Okinawa to the present day. 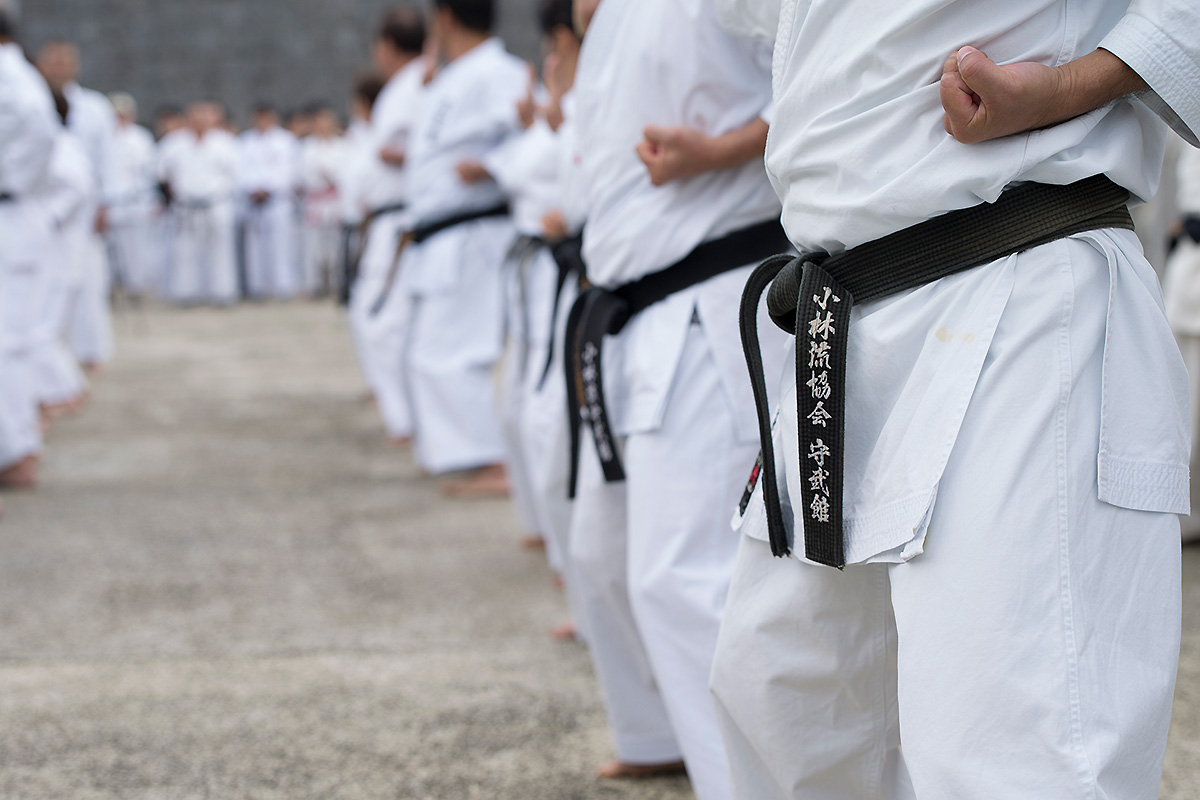 Ti developed during the Ryukyu Dynasty, and further developed under masters such as Sokon Matsumura, Kanryo Higaonna, and Kosaku Matsumora. Karate was later divided into three styles Shuri-te, Naha-te and Tomari-te and from these three styles the various ryuha (schools) developed.

In 1879, the Meiji government of Japan abolished the Ryukyu Kingdom, and the Japanese prefecture of Okinawa was formed. Karate diversified into various ryuha (schools). At the same time, masters such as Anko Itosu, modernized karate so that it was accessible to not just serious martial artists, but also school children, and the general public. 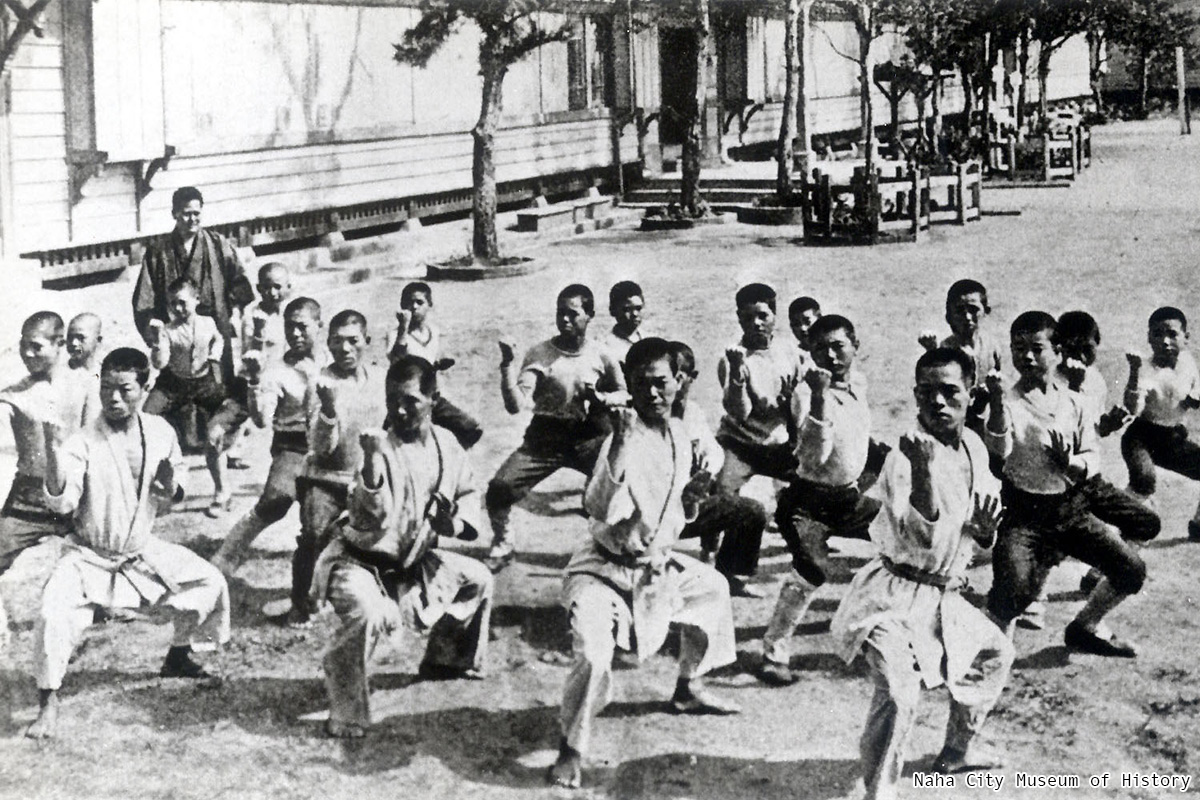 Okinawa would continue to be integrated into Japan, and karate became popular in the mainland, and overseas. The type of karate practiced however was localized by area. This is why there are differences between the karate studied today in Okinawa and mainland Japan. In Okinawa, the three main schools that developed were Shorin-ryu, Goju-ryu, and Uechi-ryu. Shorin-ryu (Shorin-ryu, Matsubayashi-ryu and Isshin-ryu) flows from Shuri-te and Tomari-te. Goju-ryu flows from Naha-te. Separately, Uechi-ryu was founded by Kanbun Uechi after he traveled to China and studied Pangainoon under the master Shu Shiwa. 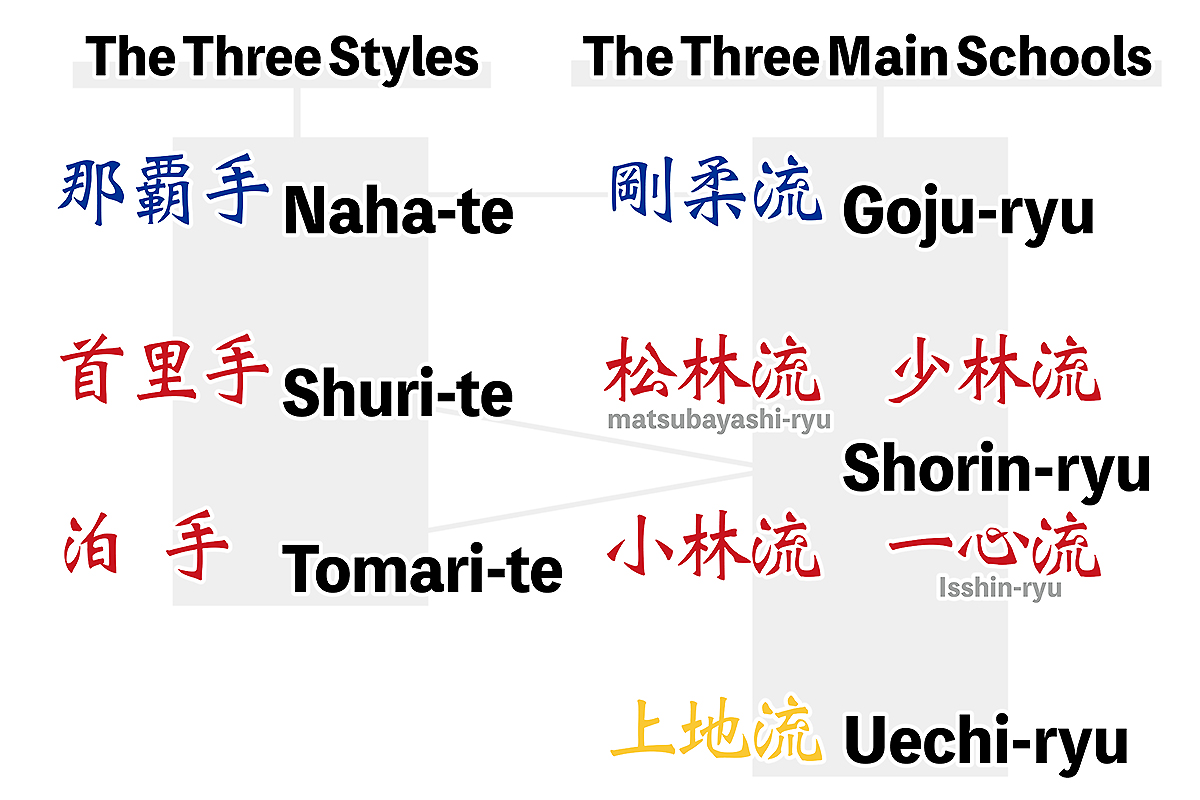 After the Second World War, the rules regarding styles, branches and dojos became more flexible. Dojos could exist without the affiliation of a specific organization. Students of Okinawa karate practitioners (karateka) set up dojos in mainland Japan, and Americans who studied karate while stationed on military bases in Okinawa, took their new skills back home. Karate also spread across the world as Okinawans visited or emigrated to North America, South America and Europe. These satellite organizations and dojos have retained a strong connection back to the spiritual heart of karate in Okinawa.

The Future of Okinawa Karate

As karate debuts as an Olympics sport, it is gaining more attention. It is important for Okinawa to educate the world about the important cultural legacy that is Okinawa karate, and to properly preserve it for future generations. 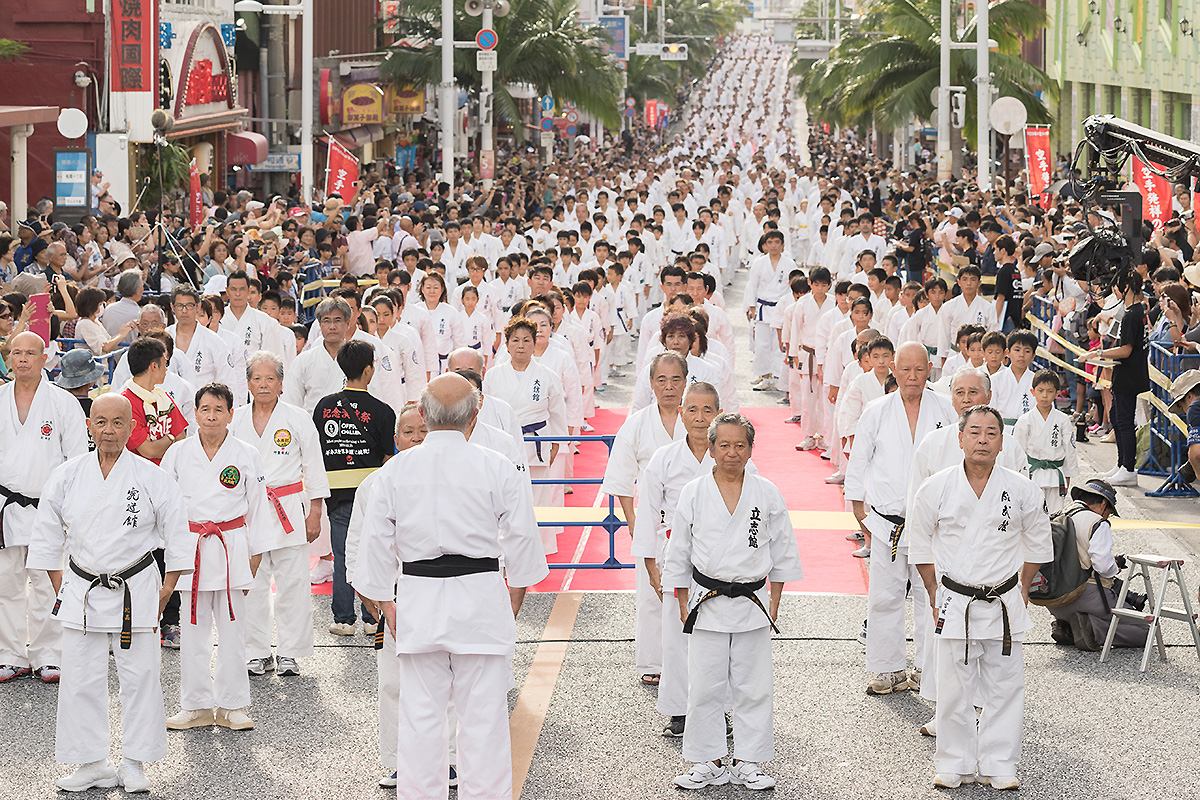 In Okinawa, the most senior masters of karate have been recognized by the prefecture as Intangible Cultural Asset Holders in the Field of Okinawa Karate and Martial Arts with Weaponry. The Okinawa Karate Kaikan opened in 2017, and is now the venue for international karate tournaments and seminars. “Okinawa the Birthplace of Karate” is a key concept that has been shared domestically and abroad. The Okinawa Karate UNESCO Registration Promotion Council was created by the Okinawa Prefectural Governor with the aim to register Okinawa karate as a UNESCO Intangible Cultural Heritage. 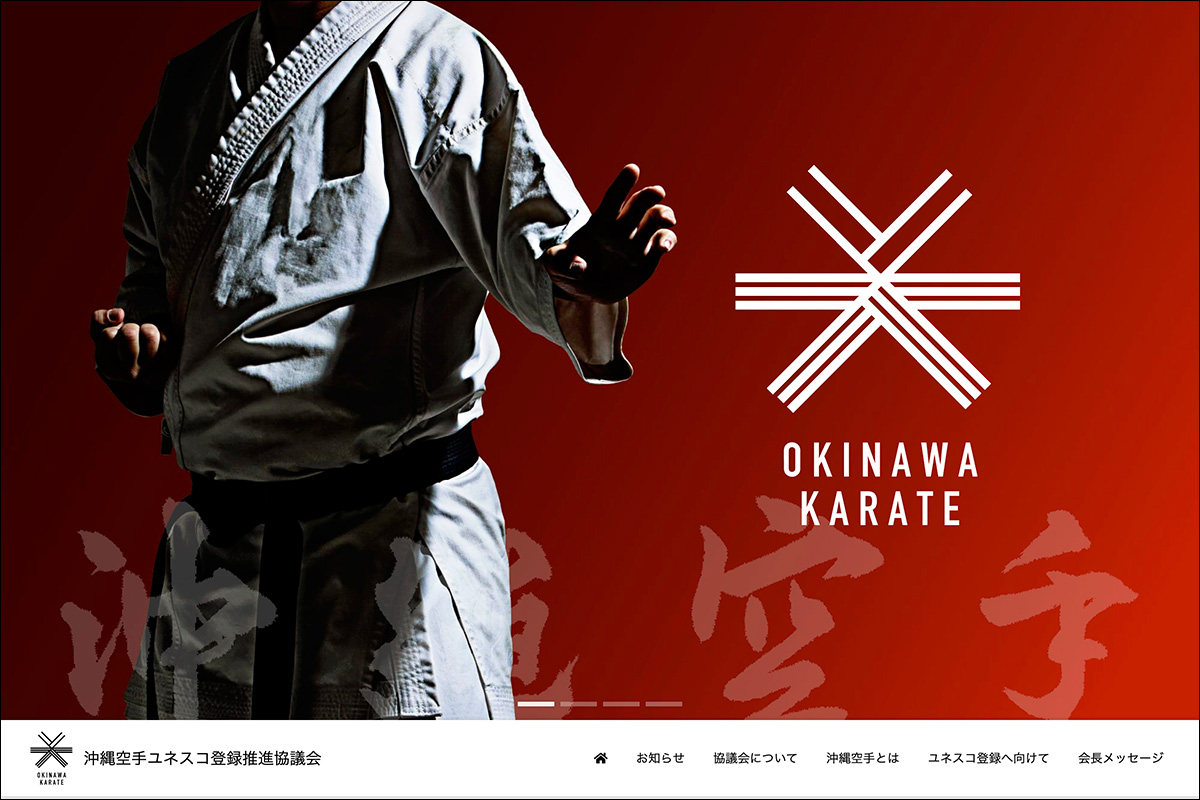 In Okinawa, people gather to train in their local dojo, regardless of age or gender. In a multitude of ways, karate strengthens the bonds between people in their local community, including martial art demonstrations during festivals and school classes. 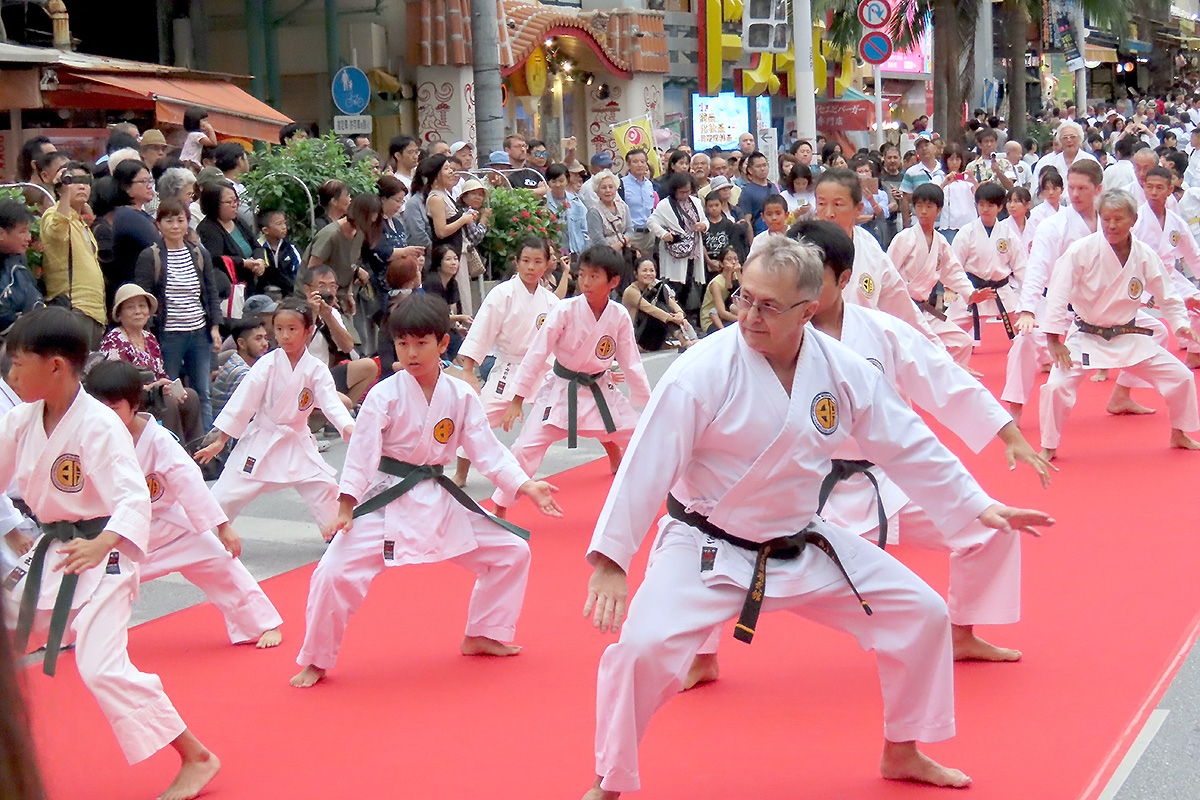 The value of traditional Okinawa karate and culture exchange through karate, is not limited by geography. Karate can contribute to a culture of world peace that transcends national borders, politics and racial barriers. Our desire is to pass on Okinawa karate to the next generation with this vision of a peaceful future for the world. 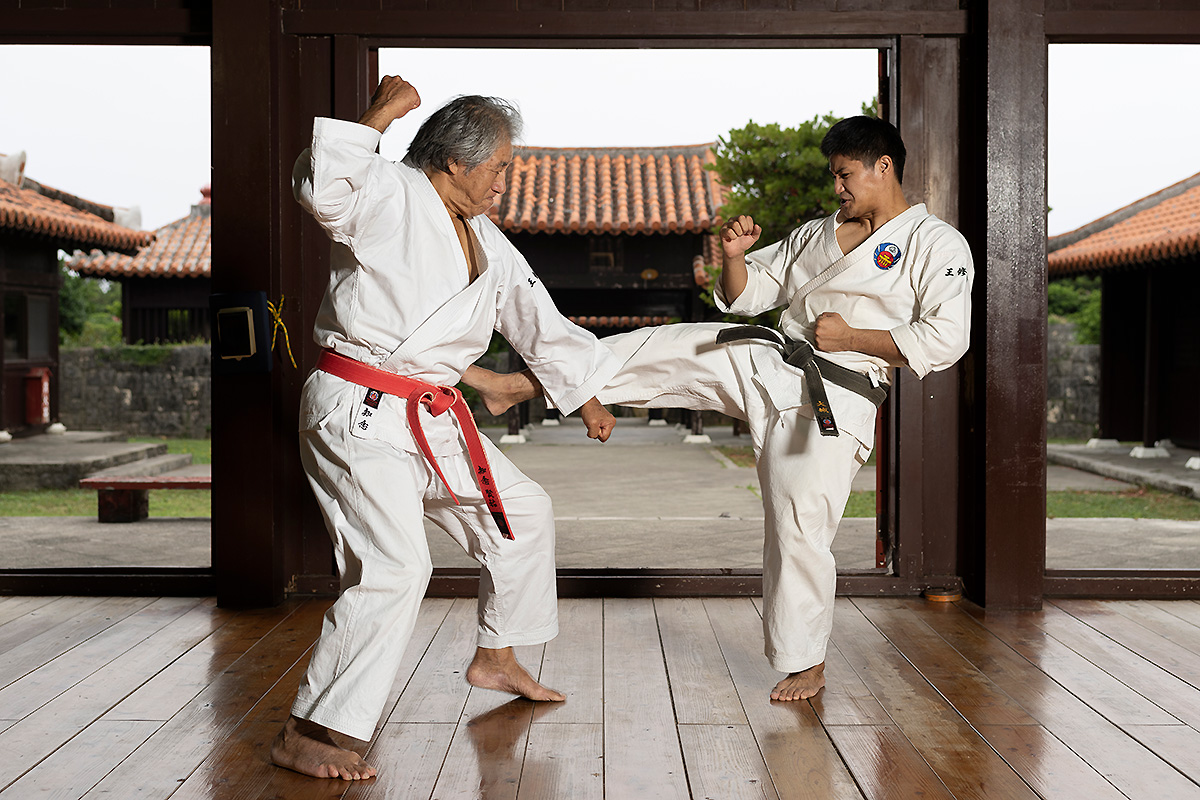 Written with the assistance of the Okinawa Karate Information Center