Nakagusuku Castle was built to defend against attacks from the east by Lord Amawari of Katsuren Castle and was lived in by the great commander Gosamaru. The castle is on a hill 167 meters high. You can see the ocean from the castle walls. Some parts of the castle were renovated by Gosamaru, who was also known as a great castle designer. You can see the differences in masonry used to build the castle at some points.

Nakagusuku Castle consists of 6 enclosures in the so called “Renkaku style.” Major parts were built by previous lords, and “The North Enclosure” and “The Third Enclosure” were added by Gosamaru in order to prepare for war. These were built with advanced masonry using the “Aikata-zumi” technique to interlock and pile up rocks and for the arch-shaped main gate. The expedition deployed by Commodore Perry which came to Japan at the end of Edo period declared the masonry to be of admirable construction.

Track the Transition of Masonry 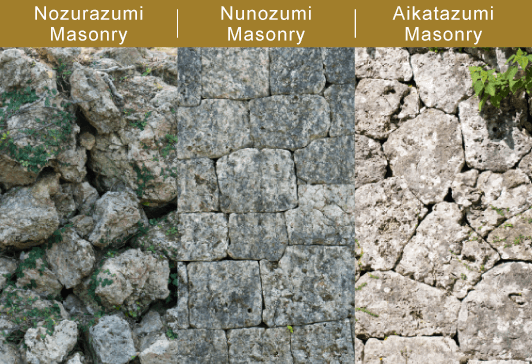 Nakagusuku Castle was damaged relatively little by WWII and still retains its original features, therefore the transition of masonry stone laying can be seen. The South Enclosure was built with “Nozurazumi” masonry, and The Main Enclosure and The Second Enclosure were built with “Nunozumi” masonry. For The Third Enclosure Gosamaru introduced the most advanced stone laying technology of the time known as “Aikatazumi”. The normal route starts from The Rear Gate however if you want to see the transition of masonry in chronological order, go to the back first and start from The Main Enclosure there.

Column｜Gosamaru’s Last Stand At The Castle

Gosamaru was ordered to move to Nakagusuku Castle from Zakimi Castle in order to control lord Amawari of Katsuren Castle who was gaining power. However, Gosamaru was suspected of rebellion by the king because of a conspiracy and was attacked without resistance. He killed his children, wife, and then himself at this castle. The history books say that Gosamaru was loyal to the king until the very end of his life.

Admission for Seeing the First Sunrise (charged)
New Year’s Day (6:00 – )
An event to see the first sunrise of the year and celebrate the new year.

Volunteer Guide “Gusuku no Kai”
Tel: 098-935-5719 (Reservation is required * At least 1 week in advance)
*The reception and tour guide will be conducted exclusively in Japanese.

Take Route 329 from Naha Airport and drive toward the north. After passing both Yonabaru and Nishihara Towns, turn left on Nakagusuku Kouen Iriguchi Crossing. Take Route 146 (About 50 min).
By Okinawa Expressway, take Naha I.C. and get off at Kitanakagusuku I.C. (About 30 min).
Map Code for car navigation system: 33 411 581

Take “Yui Rail” at Naha Airport and get off at “Asahibashi Station.” Walk toward Naha Bus Terminal (5 min on foot). Take Toyo Bus (#30) bus and get off at “Nakagusuku Shogakko” bus stop. Approximately 2km in one-way (more than 30 min on foot to climb up a slope / 5 min by taxi)
Yui Rail Official Website
Bus-navi Okinawa *General Information System for Fixed-route Buses on the Main Island