The Castle of the Lord of Hokuzan During the Sanzan Period

Before the Golden Age of the Ryukyu Kingdom there was a civil war period called the Sanzan Period, during which the Ryukyu Kingdom was divided into 3 nations – Hokuzan, Chuzan and Nanzan. Nakijin Castle was a castle of the Hokuzan’s King who ruled the area from northern Okinawa and further to the Amami Island region. However,  in 1416 Hokuzan was attacked by Sho Hashi who ruled Chuzan. After Sho Hashi unified the 3 nations the Ryukyu Kingdom was born, and Nakijin Castle was used as a residence for the guard officers who were sent by Ryukyuan Government. The length of the castle wall is 1.5 kilometers, and the height is 8 meters tall at the highest place, and the scale of the entire castle makes it the 2nd biggest castle behind Shurijo Castle.

Most castle walls were built with Ryukyu limestone. They were formed with piled-up coral calcareous that are easy to process. Unlike these castle walls, Nakijin Castle was built with the hard rocks called Paleozoic limestone, and they were unearthed from its immediate vicinity. Since the rocks were formed in primeval time, fossils of ammonites and more have often been discovered here. A distinguishing characteristic of the castle wall is that it was built with the oldest known construction technique, called Nozura-zumi. This technique takes advantage of the rocks’ natural shape to pile them up and build the wall.

Construction of the castle wall of Nakijin Castle started in the 14th century. Unlike rectilinear castle walls in Japan, its style was influenced by China which had diplomatic relations with Ryukyu Kingdom at that time. Such castle walls made from rocks were constructed in Ryukyu Kingdom 300 years earlier than in Japan. The main reason why the wall is undulating is apparently for defense purposes. A huge rock was placed on the roof of “Heiroumon,” the main gate. It suggests that the castle was very secure.

An Ancient Path to Imagine the Depth of History

In the middle of the stairs from the main gate, there is an old path to the right. It was emerged from the natural topography, and this ancient path from the main gate has certainly been used for a very long time ago. Let your mind wander and you can easily imagine a time when kings and queens were walking on exactly the same path. 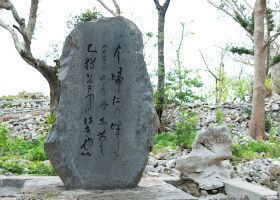 There was a woman of great beauty named Shigema Utudaru, she was the concubine of the King Hokuzan and doted on the royal prince. She risked her own life to protect the prince when a succession conflict broke out. Pure-hearted Shigema Utudaru was treated as a God, and later called “Nakijin Ukami.” A poem about her tender love written by an anonymous poet became popular among the people, and it was inscribed on a monument. It is located at “Uumiyaa,” a square of Nakijin Castle.

Nakijin-gusuku Sakura Matsuri (Cherry Blossom Festival)
Late January– Early February
A light up of the site will be held during the event
Tel: 0980-56-2101

ON THE TRIP A Traveler’s Guide( App Store )