The Reason Why the Garden Was Built

Shikinaen Royal Garden, a second residence for the royal families, was built to entertain envoys of the Chinese Emperors, in 1799. Using its geographic advantage, the Ryukyu Kingdom flourished between the 15th and 16th centuries as an intermediate trade area connecting China, Japan, Korea and Southeast Asian countries. In particular, China had enormous power and their own rules of diplomacy called Sappu. In order to trade with China, the Chinese Emperors needed to authorize kings as the “King of Ryukyu Kingdom.” Under this so-called Sappu system, every time a new king took over the throne, the Chinese emperors sent envoys and handed certificates to authorize the new kings. Banquets were held at the Shikinaen Royal Garden to entertain envoys, and were considered very important to maintaining a good relationship with China.

A Second Residence for Entertainment

The garden is a circuit-style garden, a shape much loved many of the powerful territorial lords in pre-modern Japan. A Chinese-style arch bridge is situated across a large pond in the center of the garden, and a Chinese-style hexagonal building, called Rokkakudo, is located on a small island in the middle of the pond. Taking a stroll around the pond, to see the various views is very popular here. An Udun, the Ryukyuan traditional style of the state guest house with a red tile roof, is also located near the pond. You can see the unique Ryukyuan style of garden culture which features both Japanese and Chinese styles set amongst rich nature.

A Stone-Paved Road Full of Entertainment

The road from the main gate used to welcome guests is a stone-paved road made of Ryukyu limestone. While strolling in the woods keep to the road and take in the pleasant scenery, before long you will reach the palace and the pond. Plants found in all of Japan’s four seasons were planted around the pond, and these are blooming throughout the year. Japanese apricot in spring, Japanese wisteria in summer, and balloon flowers in fall. This was a place to enjoy watching the seasonal changes, even on a tropical island like Okinawa. Presently, there are a number of distinctly Japanese plants to be seen, including cherry blossom, Japanese apricot, willow and more. Also, unique plants of Okinawa can be seen at the garden. These plants include Ryukyu Island pine, sago palm and cornbeefwood. The combination of Japanese and Okinawan plants are the quintessential part of Shikinaen Royal Garden’s scenery.

A Spring with Proud Clear Water

There is “Ikutokusen,” a spring filled with still water , at Shikinaen Royal Garden. It was designated as a national monument, recognized as the birthplace of red alga (Thorea gaudichaudii), which grows only in clear fresh water. There are also monuments from Chinese envoys praisingspring to be found here.

Column｜A Landscaping Plan to Give the Impressionof a Sizable Country 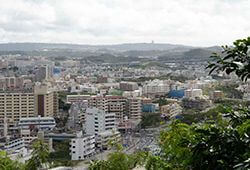 “Kankodai” is located at the prime vantage point at Shikinaen Royal Garden, and was used as an observatory to show the view to Chinese envoys. By taking advantage of a non-oceanview landscape, presenting only the perspective of land gives the impression of a rural scenery stretching out before your eyes. This visual trick was employed to make the envoys believe that the kingdom appear as a sizeable country. Adding to this impression where the cultivated fields in nearby Kankodai. The royal families most probably wanted to imply that theirs was a country which has bountiful harvests. Fruits, including bananas, Japanese plum and lychee are still cultivated there to this day.

A session about Shikinaen Royal Garden and world heritage

Date: the 3rd Sunday of odd-numbered months, 9:00 – 10:00 (1 hour)
Detail: Pay attention to the explanation by a manager and learn about Shikinaen Royal Garden, the world heritage. Admission is free. All participants are required to meet at the ticket office before the session starts.

Take Route 332 and 329 from Naha Airport. Go straight toward Route 82 at Uema Crossing, and you will find the destination right soon taking Route 222.

Take Yui Rail at Naha Airport and get off at “Shuri Station”. Approximately 15 minutes by taxi.
Yui Rail Official Website