Zakimi Castle was built by Gosamaru, a great commander who played an important role during the Sanzan Period (civil war era) and worked hard to secure the Ryukyu Kingdom after its unification. It was built around 1420, with the purpose of keeping an eye on the powers opposed to the King. Even though small in size, it features the most sophisticated and beautiful stone-built wall and gate among all castles in Okinawa. This is an important historical site which indicates the sophisticated techniques of stone structures.

The front walls of the castle are projected as waves, a strategy to thwart enemy attacks. It is believed to be possible to easily make out the enemy without leaning over the wall, and it was also effective for attacking from multiple directions. There is a passageway which seemingly continues endlessly. When you keep going forward, it actually leads to a dead end. This twist, “Musha gakushi,” is to fool the enemies and gives opportunity to attack them. It is obvious that Zakimi Castle was built as a fortified castle in preparation for war.

Zakimi Castle was built on argilliferous red clay soils called Kunigami Maaji. The castle wall’s curved line and thickness of width are likened to a folding screen. It is designed to be effective for compensating the geological condition and making an unbreakable structure. Masonry that interlocks and piled up rocks is called Aikata-zumi, and another technique called Nuno-zumi can be seen in the castle architecture of Japan. These masonry techniques were used to build the castle. Its gate is the oldest arch-shaped gate existing in Okinawa. Wedges were used on the center part of the gate to enhance its strength. This unique structure can be seen only on Zakimi Castle, and it symbolizes the sophisticated degree of Gosamaru’s building techniques.

Beautiful Prospect from the Castle Wall

Zakimi Castle is located on a hill approximately 125 meters above sea level. On a sunny day, it is possible to easily see Naha City, where Shurijo Castle is located. The characteristic of this castle wall is the thickness of width, wide enough for 5 or 6 adults to stand on. Zakimi and Nakagusuku Castles are the only castles in Okinawa where it is permitted to stand on the walls (although some areas are prohibited to enter). Also, since admission is free, you can visit here anytime you want. Visit in the late afternoon and stand on the castle wall, you can see a beautiful sunset view.

Column｜The Technique of Yuntanzan Hanaui Which was Brought by Trading 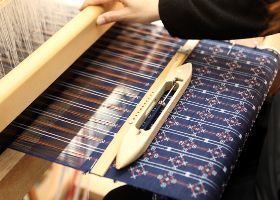 During the time Gosamaru was engaged in international trade at a port near Zakimi Castle, a weaving technique was brought from Southeast Asia, which later served as the roots of the textile “Yuntanzan Hanaui” produced in Yomitan Village. Yuntanzan Hanaui was produced based on the introduced technique, and was adopted as the textile of the Ryukyu royal government. In the post-Meiji period, the production was stopped temporarily as the weaving industry underwent industrialization, however, it later resumed in 1964 due to the valuable efforts of volunteers. Presently, it is designated as an Intangible Cultural Properties of Okinawa and Traditional Craft by the Ministry of Economy, Trade and Industry.

Take “Yui Rail” and get off at “Asahibashi Station”. Walk toward Naha Bus Terminal (5 minutes). Take Yomitan Line (#29) and get off at “Zakimi” or “Takashiho Iriguchi” bus stops. Walk approximately 15 – 20 minutes.