Shichi Festival is a traditional event held in two Iriomote Island villages to pray for a bountiful grain harvest. A tradition reaching back around 500 years, this festival has been designated as an important intangible folk cultural asset by the government of Japan.
The festival is notable for the deity named Ohoho, that has been passed down in the village of Hoshiate. During a solemn ritual, the deity suddenly appears, laughing, "Ohoho," and warming up the venue with unique body movements. The festival also features stick fighting and traditional performing arts including the lion dance, which is performed to pray to deities for a bountiful harvest.
The main events take place on the 30th. 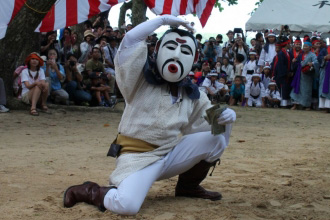