A Celebration of Fleeting Beauty

The arrival of cherry blossoms is the highlight of the Japanese year. Young and old celebrate the fleeting beauty of these delicate flowers. Okinawa’s subtropical climate means it is the first place in Japan to enjoy the festivities. From mid-January to mid-February, dark pink blossoms bring joy to both Okinawa’s residents and visitors.

Not all cherry trees are alike!

In Okinawa, the cherry trees not only bloom earlier than in mainland Japan, but the flowers are quite different. The most common Japanese cherry trees are the Yoshino cherry (Somei Yoshino) and the yamazakura. These trees both produce delicate blossoms that are pale pink, almost white. The most common variety of cherry tree in Okinawa is the hikanzakura, also known as the Ryukyu kanhizakura, or the Taiwanese cherry. Okinawa’s cherry blossoms have a sturdy, bell-like shape and hang down from the tree. The flowers’ petals are also a dark pink compared to the almost white petals of the Yoshino cherry. The beautiful bold color of the flowers make the pink cherry trees stand out on the verdant mountains.

The cherry trees also differ in how they finish blossoming. The flowers of the Yoshino cherry lose their petals one by one, sometimes creating clouds of white petals after a strong breeze, while the dark pink flowers of the Okinawan hikanzakura fall intact to the ground. 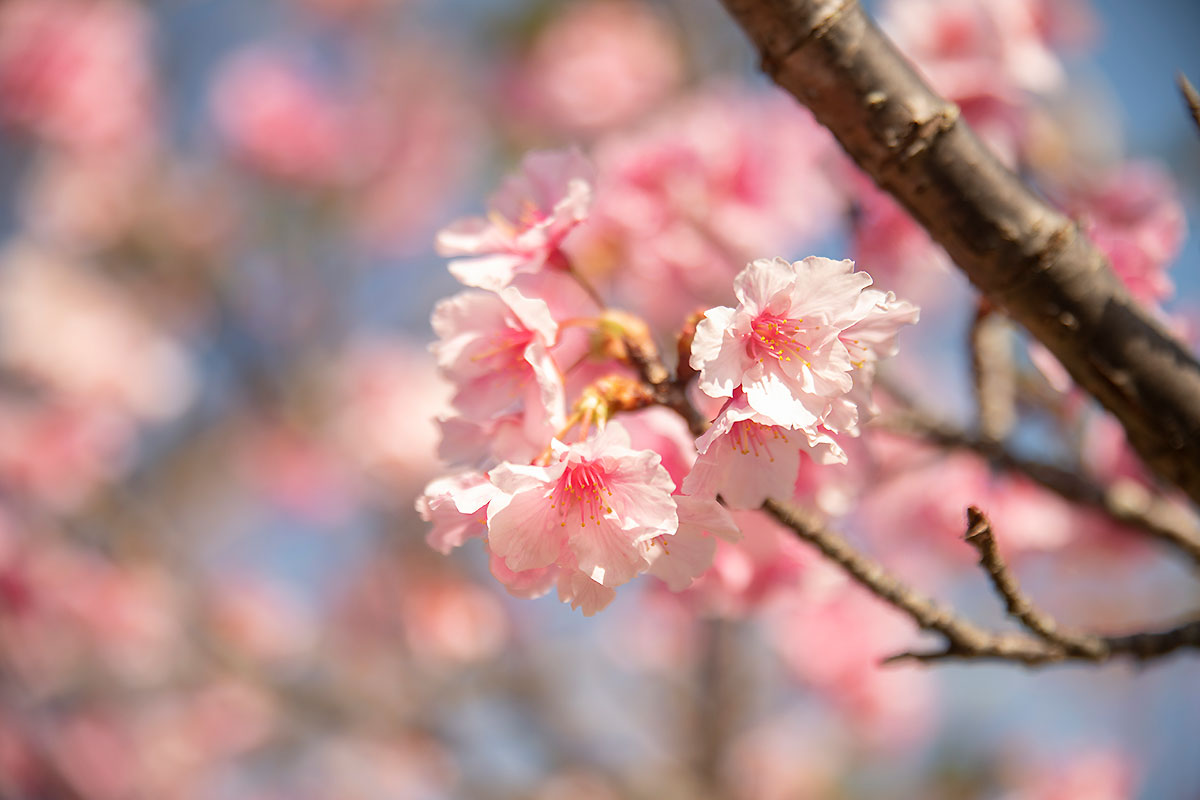 Cherry blossom viewing, known as hanami, is extremely popular in Japan. It is a chance for families or couples to spend time enjoying life’s simple pleasures. Mainland Okinawa has many great locations for cherry blossom viewing. Several of the most popular spots are located in northern Okinawa, but you can also find cherry trees across the island.

In Naha City, you can see the riverside cherry blossoms in Yogi Park. This is a great option if you are based down south and have limited time. Another southern option is Yaese Park, which has around 500 cherry trees.

The best option for cherry blossom viewing if you’re also interested in island history is to drive north to Nago City, then west along the Motobu peninsula to Nakijin Castle Ruins. 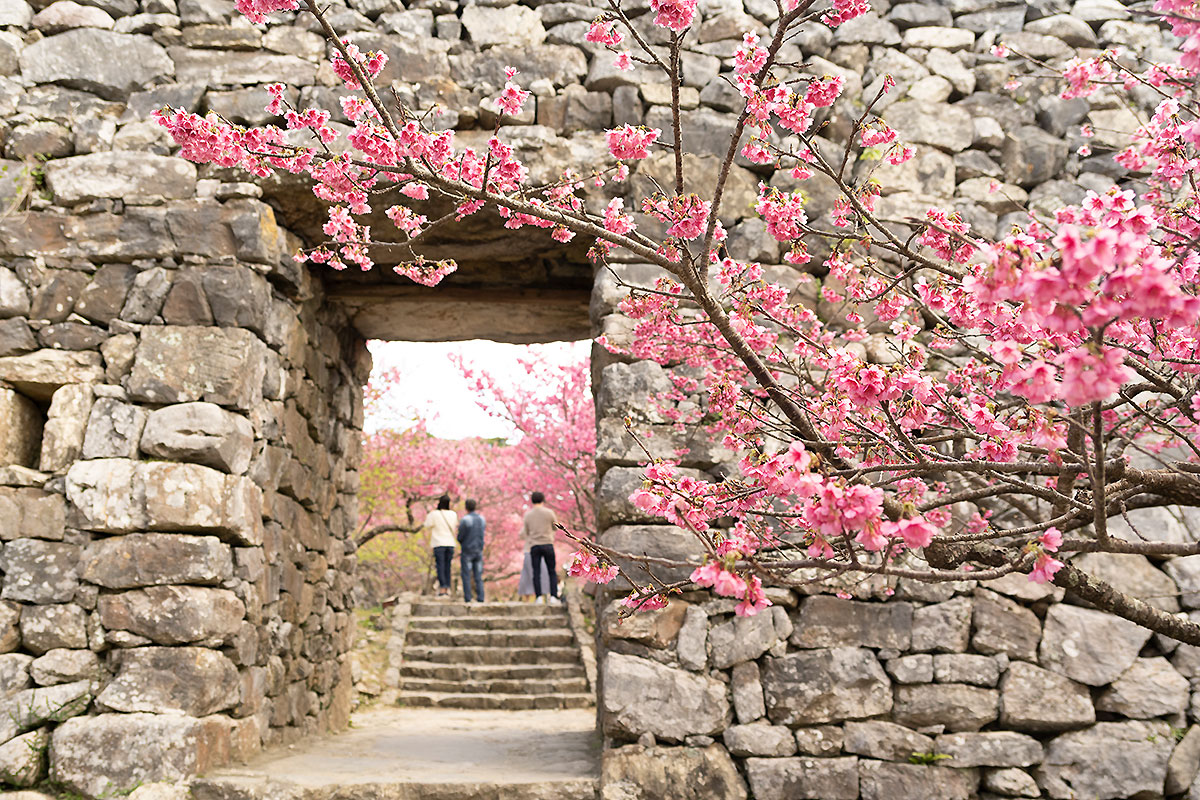 Nakijin Castle was built in the 13th century as the fortress of the northern principality. Constructed of grey Ryukyu limestone, it sits on the hillside looking out over lush green forests to the azure East China Sea. In 2000, Nakijin Castle was listed as a UNESCO World Heritage Site, a globally important example of a castle of the Ryukyu Kingdom. 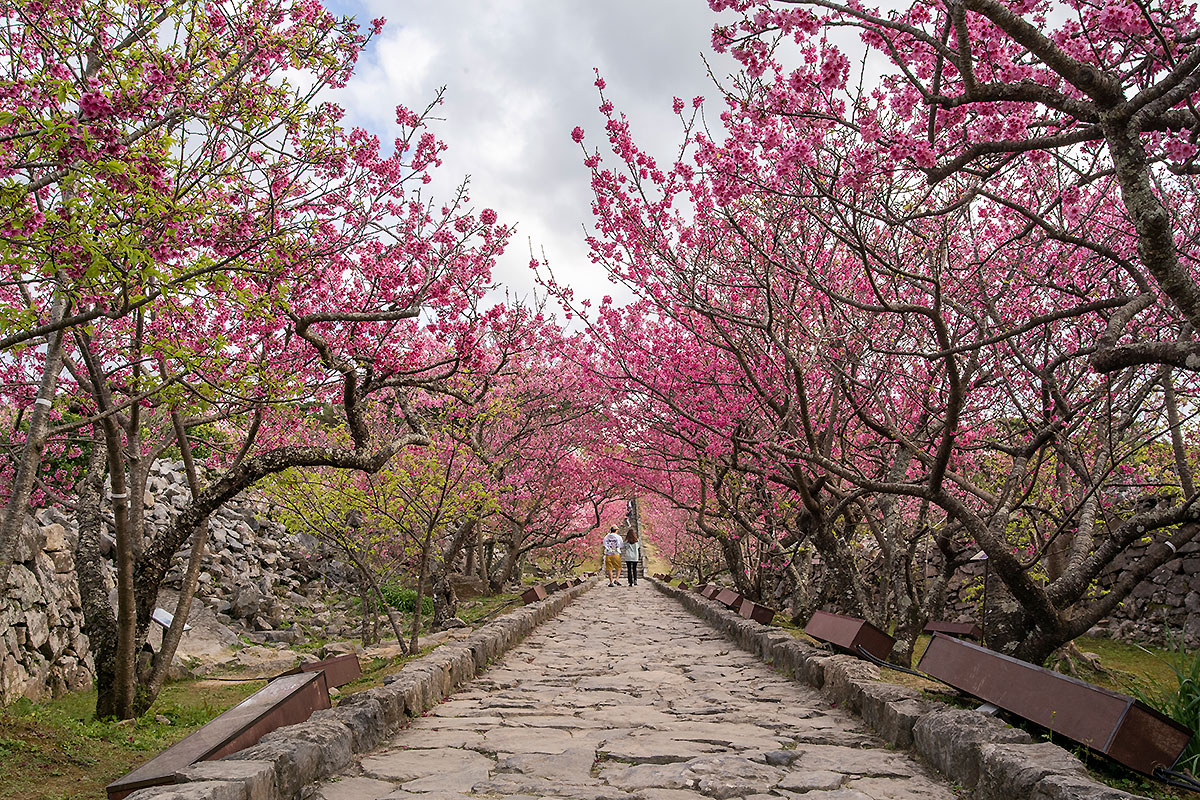 The castle is impressive to visit at any time of the year, but from mid-January to mid-February the stone walls and grounds are decked with pink blossoms. Cherry trees line the roads as you approach the castle. They are also found in clusters across the castle grounds, and most impressively, arching cherry trees flank the stone staircase within the castle itself. This is one of the prettiest places to take photos of the cherry blossoms. It is easy to create perfect shots of blossoms using the castle walls, blue skies, and ocean as a backdrop. If you’re patient, you’ll see that the flowers are also popular with the local wildlife. The olive green Japanese white eye is particularly fond of cherry blossom nectar, as are the local bees and butterflies. If you are still gazing upwards at dusk, look out for fruit bats, which can occasionally be seen nibbling on the blossoms. 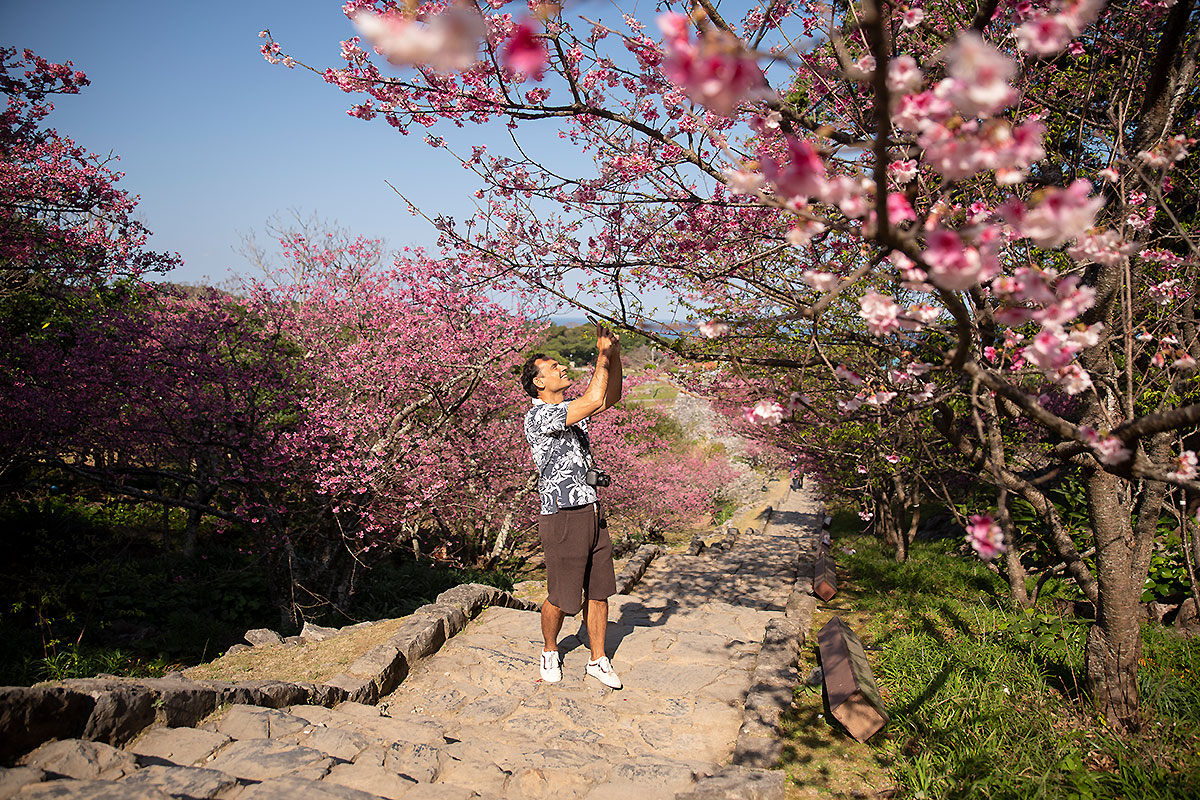 From Nakijin Castle, head east to the hills at the heart of the Motobu peninsula. The roads leading up to Mount Yae, known locally as Yaedake, are lined with more than 7000 cherry trees. The ascent to the 453-meter peak during cherry blossom season is one of Okinawa’s most beautiful and awe-inspiring drives. There are a few spots to park your car on the side of the road as you ascend Mount Yae, but it is easier and safer to use one of the large car parks which are located halfway up the mountain and near the summit. The halfway point also has the fantastic Yaedake Sakuranomori Park with a playground perfect for young children and areas for families to picnic. If you’re interested in karate history, you’ll also find a statue of the grandmaster Kanbun Uechi looking out over the festivities. 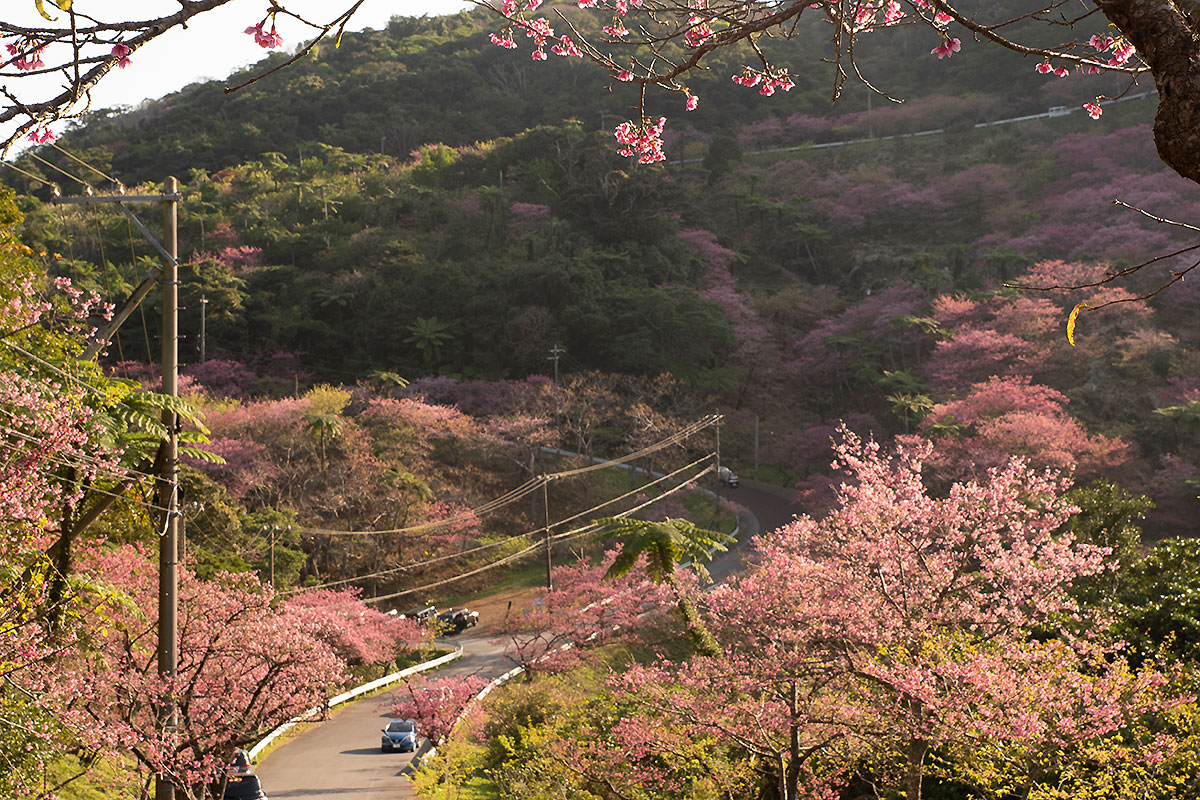 During cherry blossom season on Yaedake there are stalls selling matsuri staples such as yakisoba and yakitori, and you’ll also find delicious sakura flavor ice cream that is as fleeting as the blossoms. If making your own picnic, or roadside dining is not your thing, then head down the mountain to the British Wine and Tea Shop. Maki, the owner, studied at Le Cordon Bleu culinary school in London, and then worked as a pâtissier at the exclusive Savoy Hotel. Her scones, cakes, jams, and teas are exceptional, and during cherry blossom season the experience combines the best of Britain and Japan. 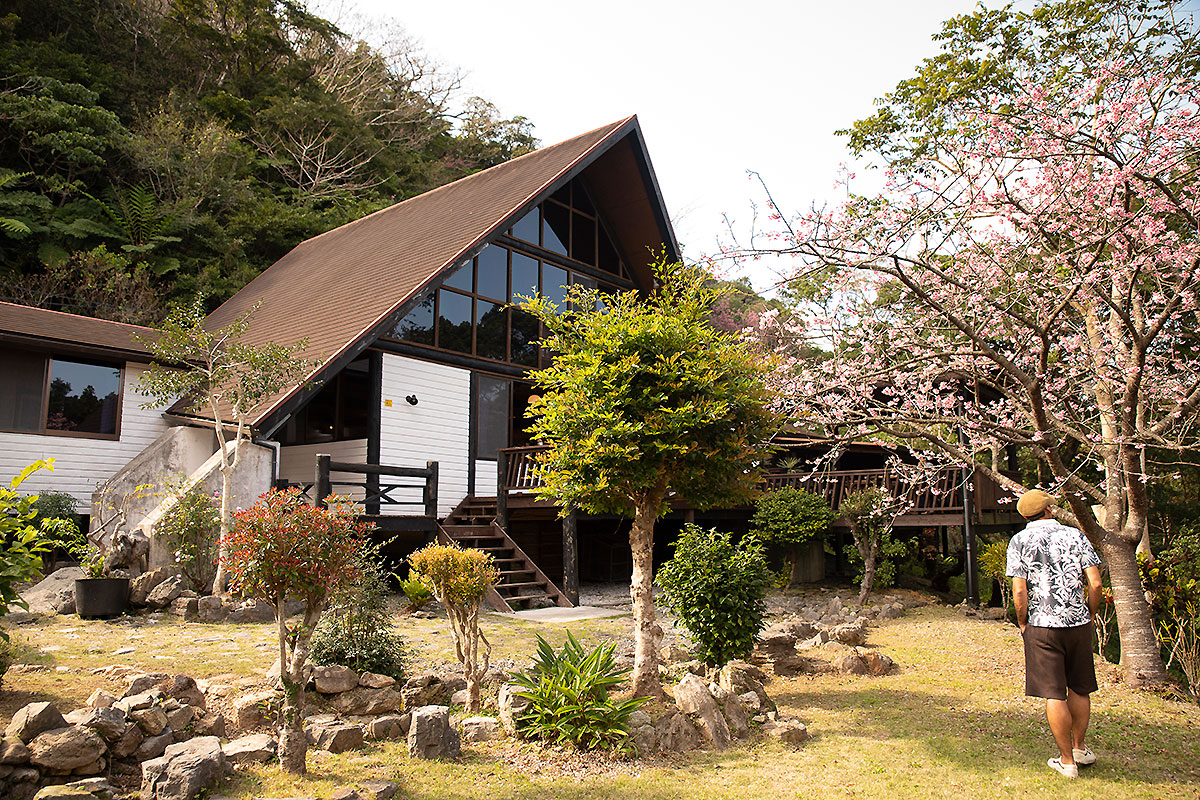 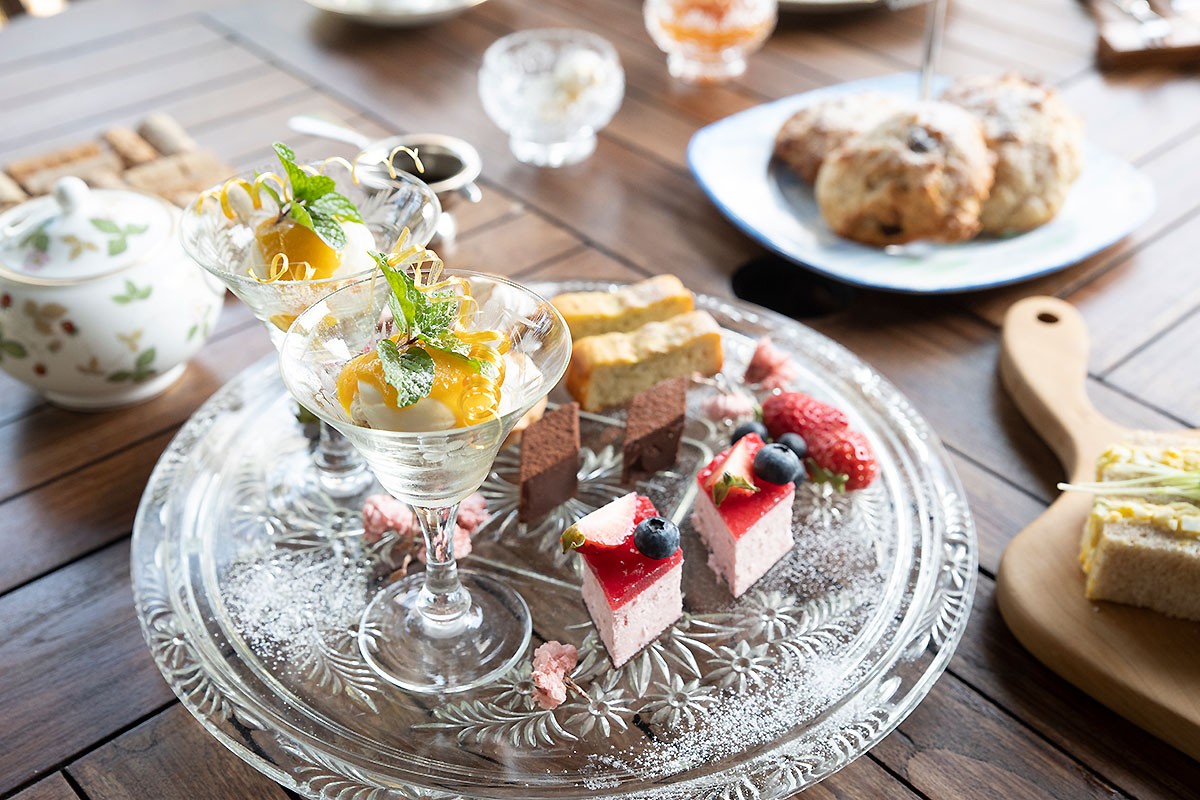 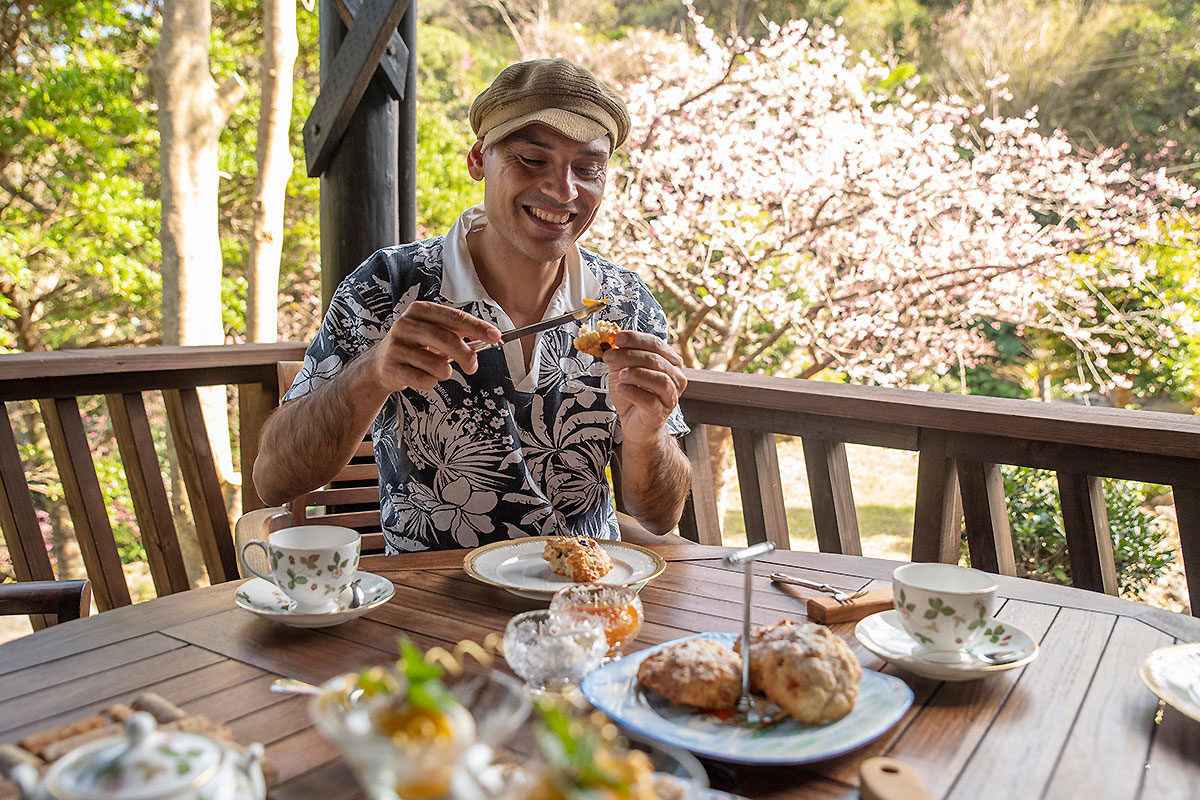 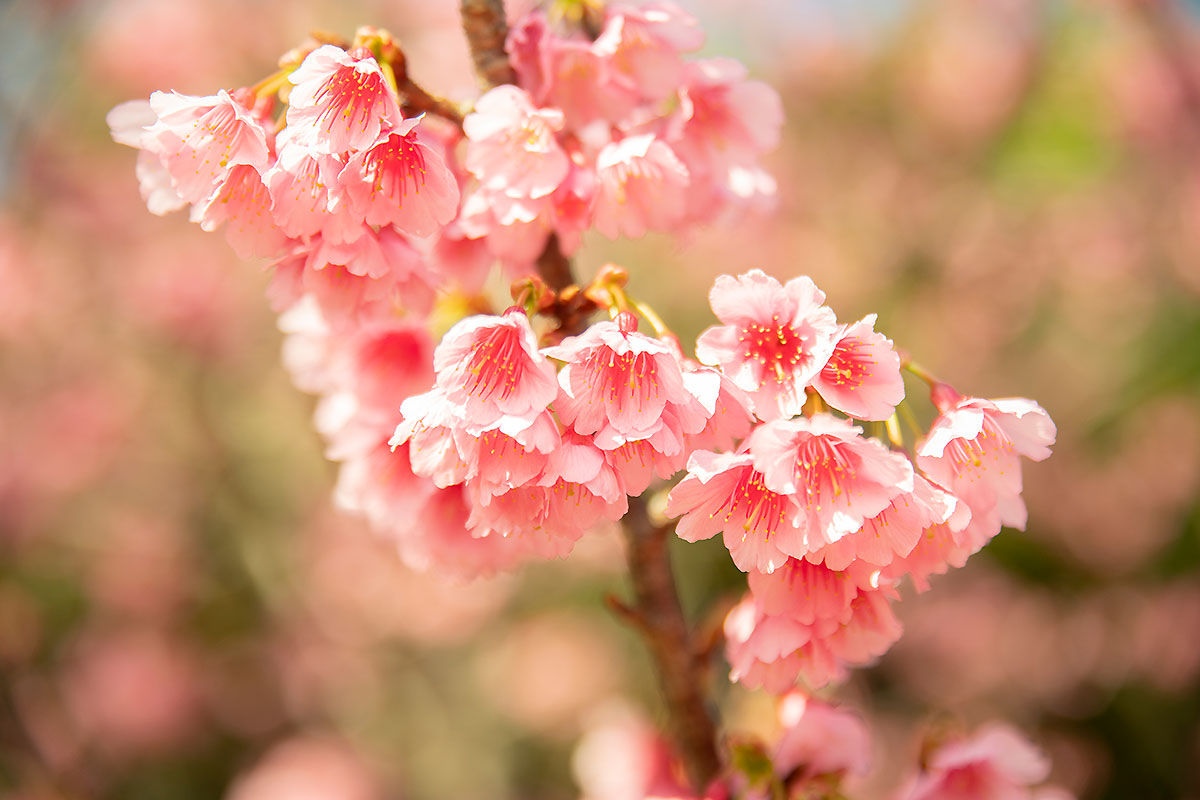 Posted on February 19th, 2021
Text by Chris Willson
Chris Willson is a British photographer, videographer, and travel writer based in Okinawa for over 20 years.

Nakijin Castle Ruins *Only in Japanese

The British Wine and Tea Shop *Only in Japanese