A Trip Around the History of Okinawa

> Categories > Tradition > A Trip Around the History of Okinawa

For 450 years, before becoming Okinawa Prefecture in 1879, Okinawa was an independent country called the Ryukyu Kingdom. The Ryukyu Kingdom flourished as a base for East Asian trade before the time of East Asian trade with European countries. The most important thing for a successful international business is to have friendly relations with other countries. In other words, it was necessary to cherish the spirit of harmony and build peace with the involved countries. Peace can create a spiritually and materially rich culture that respects uniqueness and diversity.

Okinawa, drawing upon its historical experience, has transmitted the importance of learning from history and the value of peace. Even though the Ryukyu Kingdom disappeared, even after experiencing the period of American rule after the Pacific War, and even if political problems are likely to explode, Okinawan people always say, “You must adapt regardless of the situation,  as there is nothing more important than to live in peace.” The history of Okinawa, and the peace philosophy and spirit that nurtured it, may give us hints to live in the present age. How about walking around a facility where you can learn about the history of Okinawa and think about peace?

Dating back 18,000 years ago, learn the history of Okinawa in one place 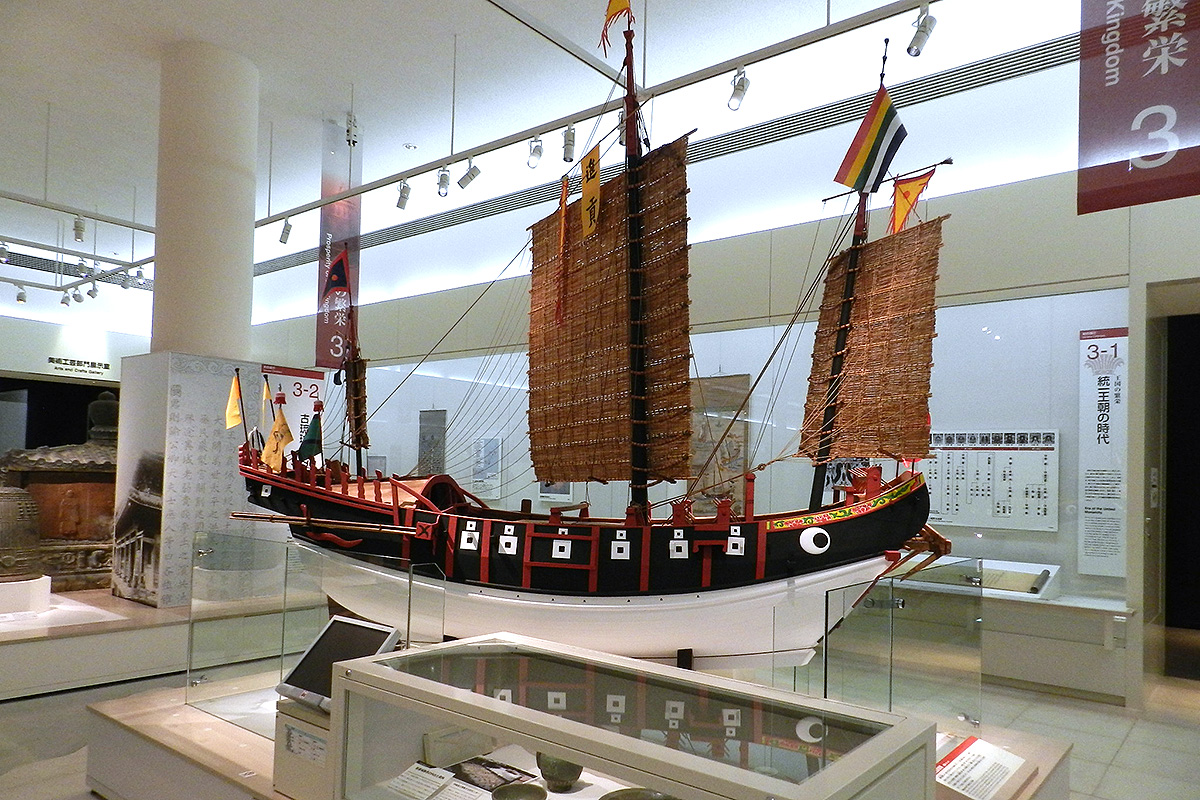 The Okinawa Prefectural Museum and Art Museum is a 10-minute walk from Omoromachi Station on the Yui Rail. The facility is designed in the image of an Okinawan castle (Gusuku) and features an overview of Okinawa’s nature, history, culture, and art all in one place. The museum is a great way to get an overall perspective into the soul of Okinawa. Special exhibitions are held for each season and theme, and there are always discoveries to be had.

To learn about Okinawa’s history and culture, a visit to the permanent exhibition is essential. Here you will learn about the “Fossil” era, the “Shell Mound” era, the “Ryukyu Kingdom” era, the “Kingdom Under the Overlord-ship of the Satsuma Domain” and the “Kingdom in Decline” eras, as well as about “Modern Okinawa” (during the Pacific War), and the “American” era (post-war until Okinawa was returned to Japan in 1972). By taking in all this history of Okinawa, and the historical and cultural background of each era, it is possible to get an insight into what lies in the future for the islands.

The Ryukyu Kingdom, which existed for approximately 450 years, flourished as a small country. It traded sailing boats to bridge foreign countries, respected neighboring countries, and built excellent relations. The philosophy called “Bankoku Shinryou” (A Bridge Between All Nations) is the foundation on which Okinawa has built its culture and experienced history. The museum also displays the “Bridge of Nations Bell,” which symbolizes the Okinawan philosophy of peace and harmony. You can hear the bell sound on the hour and half-hour while in the museum. The bell is an artifact of the Ryukyu Kingdom from the 15th century. It has survived to this day despite wartime pressure to contribute its iron to the military and the devastation of the Battle of Okinawa.

When learning about the history of Okinawa, it is inevitable to look at the Pacific War. After a visit to the museum, many people will want to see the facilities and sites associated with the terrible time. When visiting various parts of Okinawa Prefecture, especially the southern part of the main island, many Pacific War-era battle sites, prayer monuments, and caves used as air-raid shelters are still visible remnants of the conflict. They stand as vestiges of the hardest time in Okinawa’s history, and of its people’s wishes for peace. 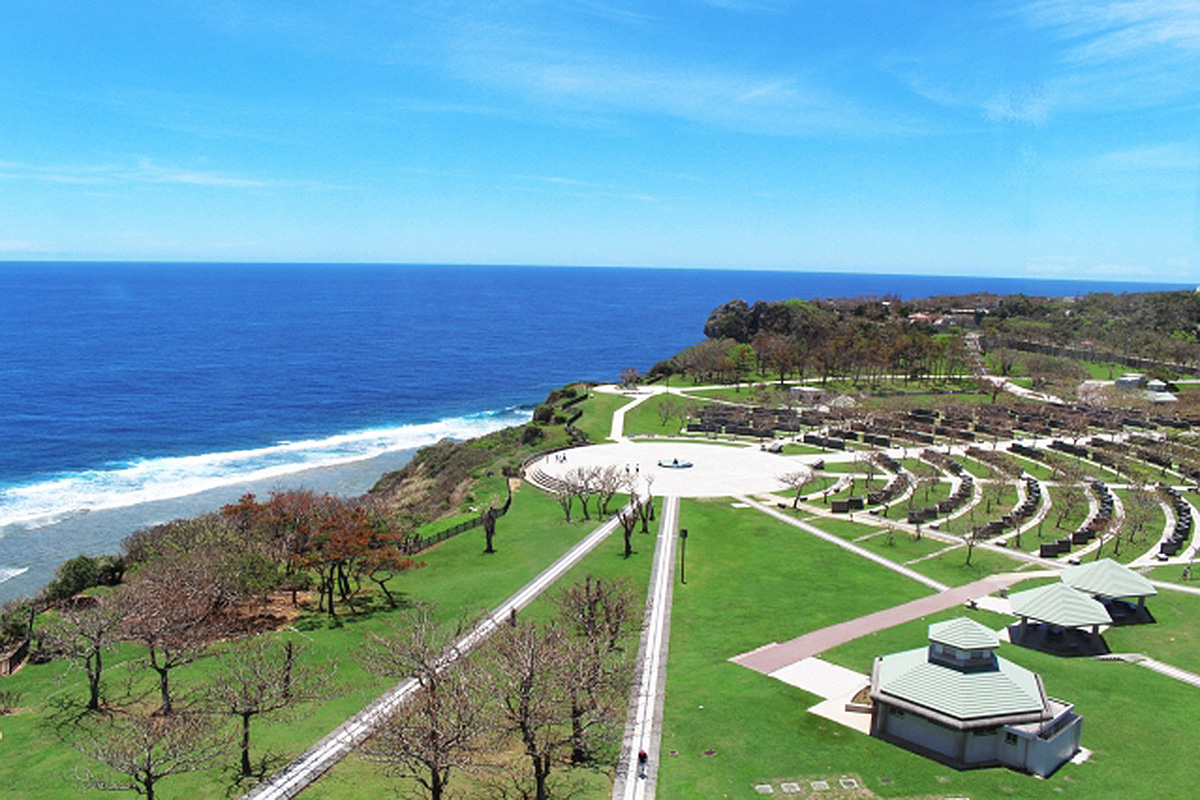 During the Pacific War, between March 26th and June 23rd, 1945, Okinawa became a fierce battlefield. The battle is often referred to as the “Typhoon of Steel,” in which more than 240,000 people died. In response to this disaster, Okinawa built a place to embody the utmost emphasis on human dignity. It denounces the actions leading to war, strives for peace, and fosters a love for humanity. The place is the Okinawa Peace Memorial Park. It’s a site where the souls of all who perished are remembered, including civilians, regardless of their nationality or military affiliation.

The Peace Memorial Park is in Itoman City, about 30 minutes south of Naha by car. The area is well known as the final battlefield in Okinawa. In the park, the Okinawa Prefectural Peace Memorial Museum displays photographs and relics from the Battle of Okinawa. The Okinawa Peace Hall is a place for prayer, reflecting on peace for all. The Cornerstones of Peace records the names of those who died in the battle. On the “Sacred Grounds Zone” on the overlooking Mabuni Hill, 50 memorials stand for those lost in the conflict. School groups and many mourners from Okinawa and other prefectures of Japan often visit this area and pray for eternal peace for the war dead. 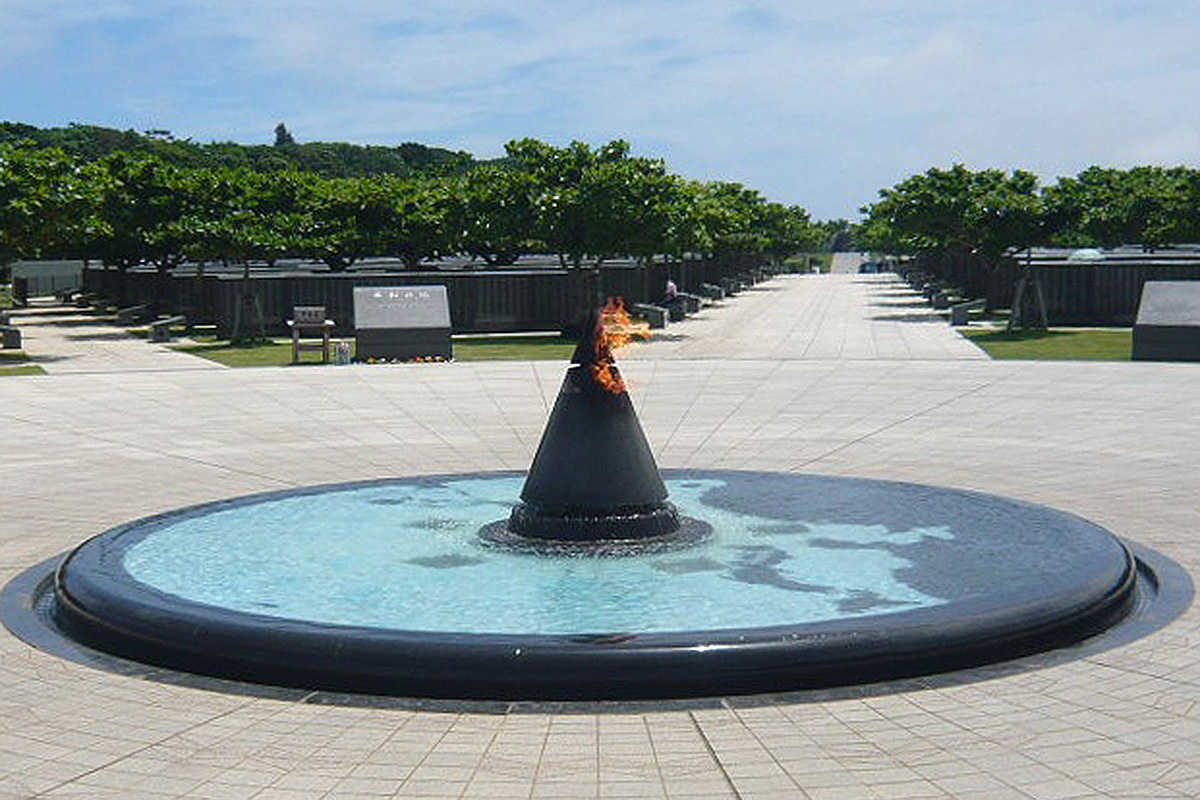 The Cornerstones of Peace form a semi-circle. At its center is a square with a water feature shaped like East and South East Asia, and the “Flame of Peace” burns at its center. This fire was drawn from fires on Aka Island and the islands of Zamami Village, which was the first U.S. military landing site at the beginning of the Battle of Okinawa. Fires were also brought from the Peace Light of the A-bombed Hiroshima City, and the Fire of Oath in Nagasaki City. It’s an eternal flame, which has never been extinguished. It serves as inspiration for each of us to light the fire of peace in our hearts, so one day we can achieve permanent peace.

Many options to learn of peace in Okinawa 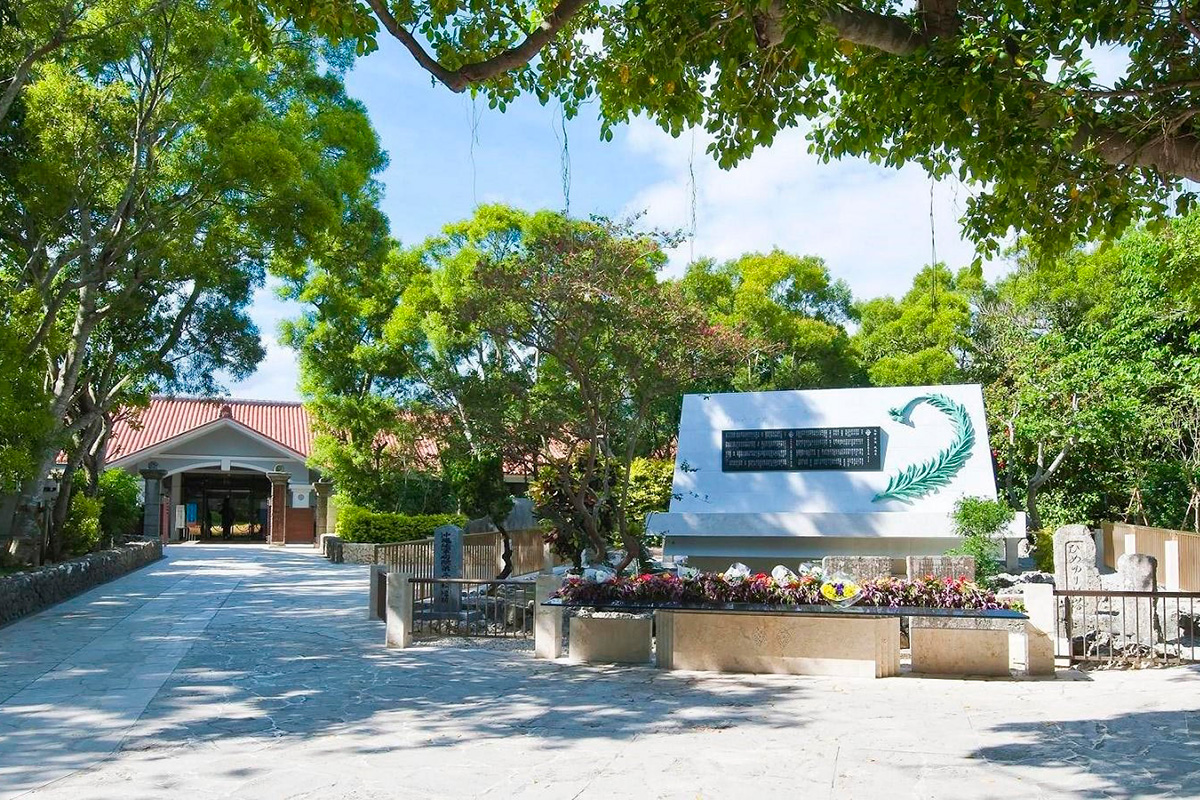 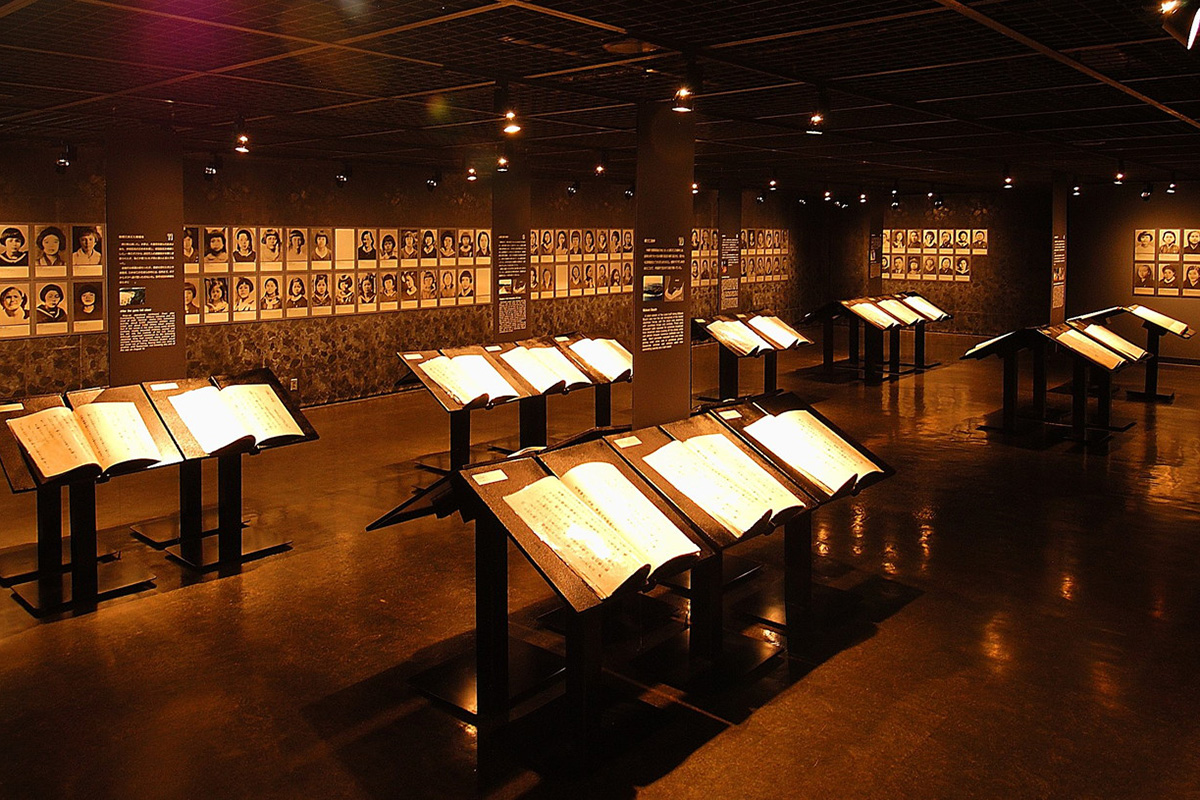 The Himeyuri Cenotaph and Himeyuri Peace Memorial Museum are about a 10-minute drive from Okinawa Peace Memorial Park. It is a facility dedicated to the 222 female students between 15 and 19 years old and 18 teachers, known as the “Lily Corp.” They were mobilized as nurses during the Battle of Okinawa, and many people visit the memorial for peace learning.

A corner in the museum displays the recollections of the students for visitors to read, and some have even been translated into English. Looking around the room at the readers with some welling up in tears, the power of these letters and their message of peace becomes soon apparent. 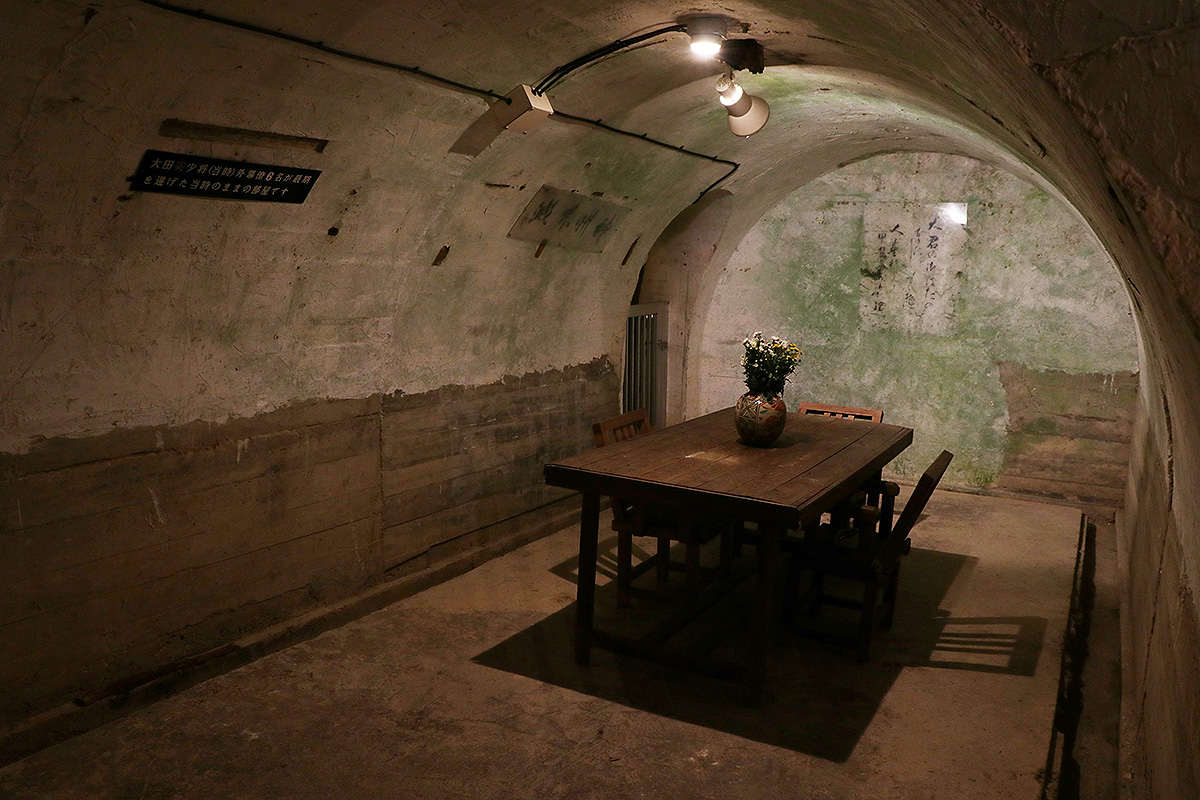 Another place worthy of a visit is the Former Japanese Navy Underground Headquarters in Tomigusuku. It’s an excellent place to learn about history and peace, as you can get a glimpse of the wartime conditions by visiting the bunker and walking through the tunnels. During the closing stages of the war, sailors from the Japanese Navy hand-dug 450 meters of tunnels and various rooms for operations. About 300 meters of the tunnel network is open to the public. During the closing stages of the battle, about 4,000 Japanese soldiers and their commanding officers perished in this bunker, many committing suicide at the very end. The walls and ceiling of the commander’s office still bear the scars from fragments of grenades that the soldiers used to kill themselves. It’s a somber reminder of the brutality of war.

When you learn the history of Okinawa, the keyword “peace” appears time and time again. By taking a trip through the history of Okinawa, you can learn the significance of Okinawa wishing to send a message of peace for the sake of permanent peace, even after experiencing such a sustained period of war. The message of Bankoku Shinryo, encapsulating Okinawan’s desire to be a Bridge of Peace to the world, is a profoundly inspiring message for us all.

Related Contents
The History of Okinawa
There are several theories surrounding the origin of the Minatogawa people ...
Read More
Discovering Sefa-utaki, Okinawa’s Spiritual Heart
Hidden by lush vegetation, Sefa-utaki is the most sacred place in the Ryukyu Kingdom. A visit to this hallowed ground, created amongst coral rocks and verdant trees, provides travelers to the islands with a better understanding of...
Read More