With its infectious rhythm and energetic hand gestures, experiencing Okinawan folk music and dance is a wonderful part of spending time on the islands. Dig a little deeper, though, and you will find it can be traced back to the rich and highly refined classical performing arts heritage that emerged during the Golden Age of the Ryukyu Kingdom. In recognition of its historical and cultural significance, Okinawa’s traditional performing arts, along with Ryukyuan cuisine and awamori, were officially registered as Japan Heritage in 2019.

Diplomacy and the performing arts 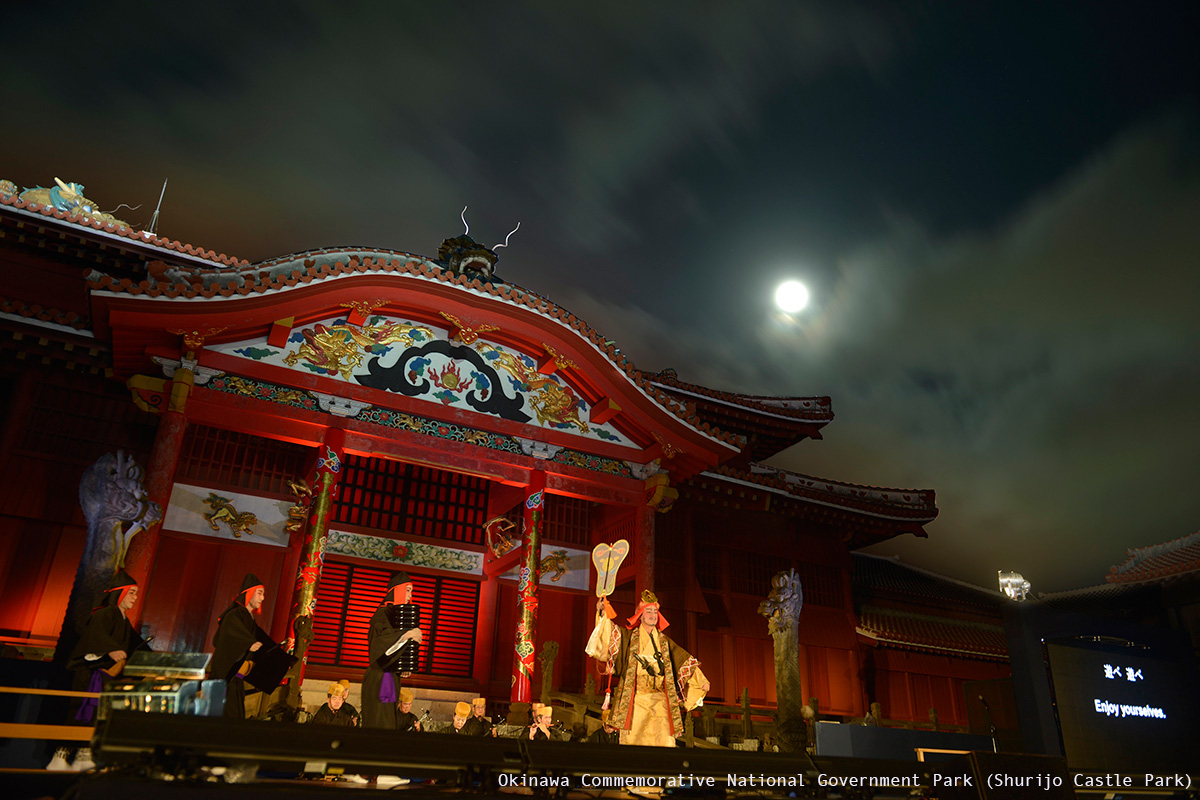 The performing arts were considered an essential tool of diplomacy in the Ryukyu Kingdom. At the pinnacle of such performing arts was Kumiodori, a theatrical done with dance and lyrics set to the musical accompaniment of the three-stringed sanshin, taiko drums, and koto harp. Performed at Shuri Castle, Kumiodori was an overt display of the high culture of the Ryukyu Kingdom, and designed to impress visiting dignitaries that had come to bestow official recognition of the Chinese emperor upon a newly crowned king. 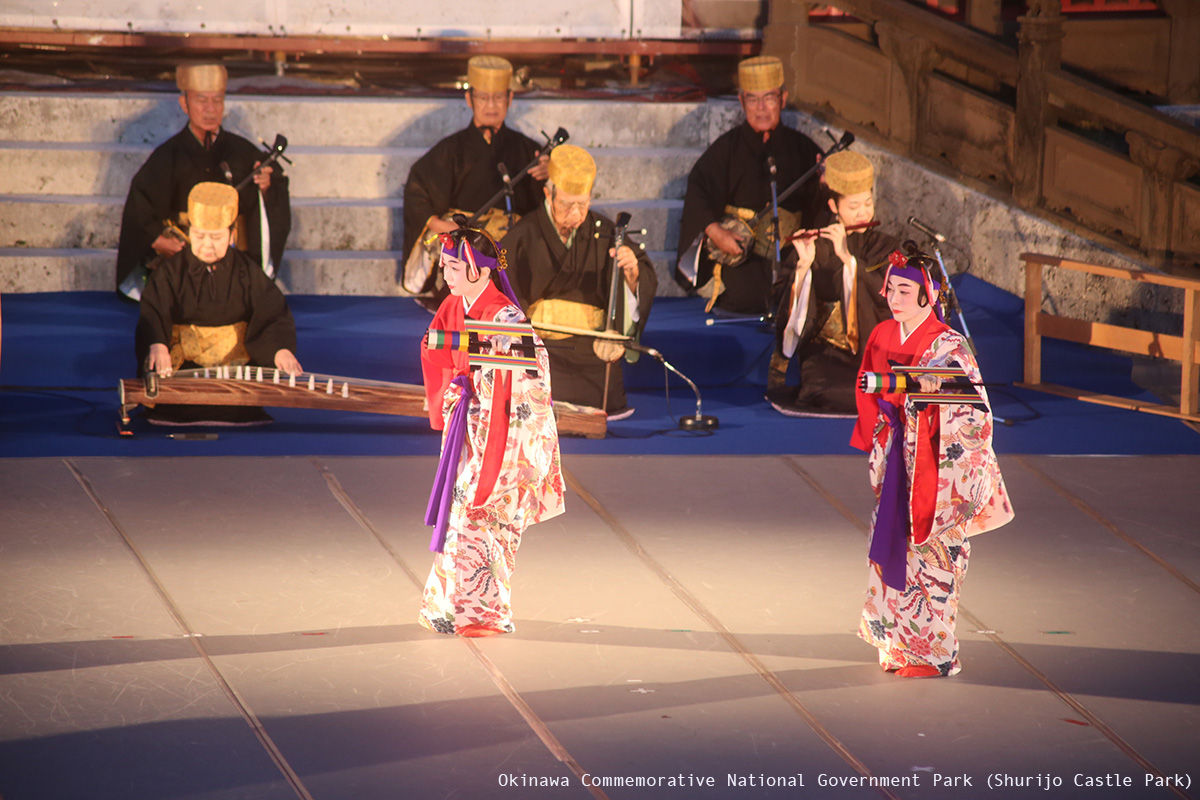 As is the case with so many facets of Okinawan culture, the elements of Kumiodori result from blending musical elements from neighboring countries with Japanese Noh and Kabuki theatrical arts to create a uniquely indigenous variation. Kumiodori is the foundation of classic Okinawan performing arts that later spread from the royal court to the population at large, undergoing yet another champuru (meaning “blending” in Okinawan language) transformation from slow and refined to the lively music and dance now synonymous with Okinawa. 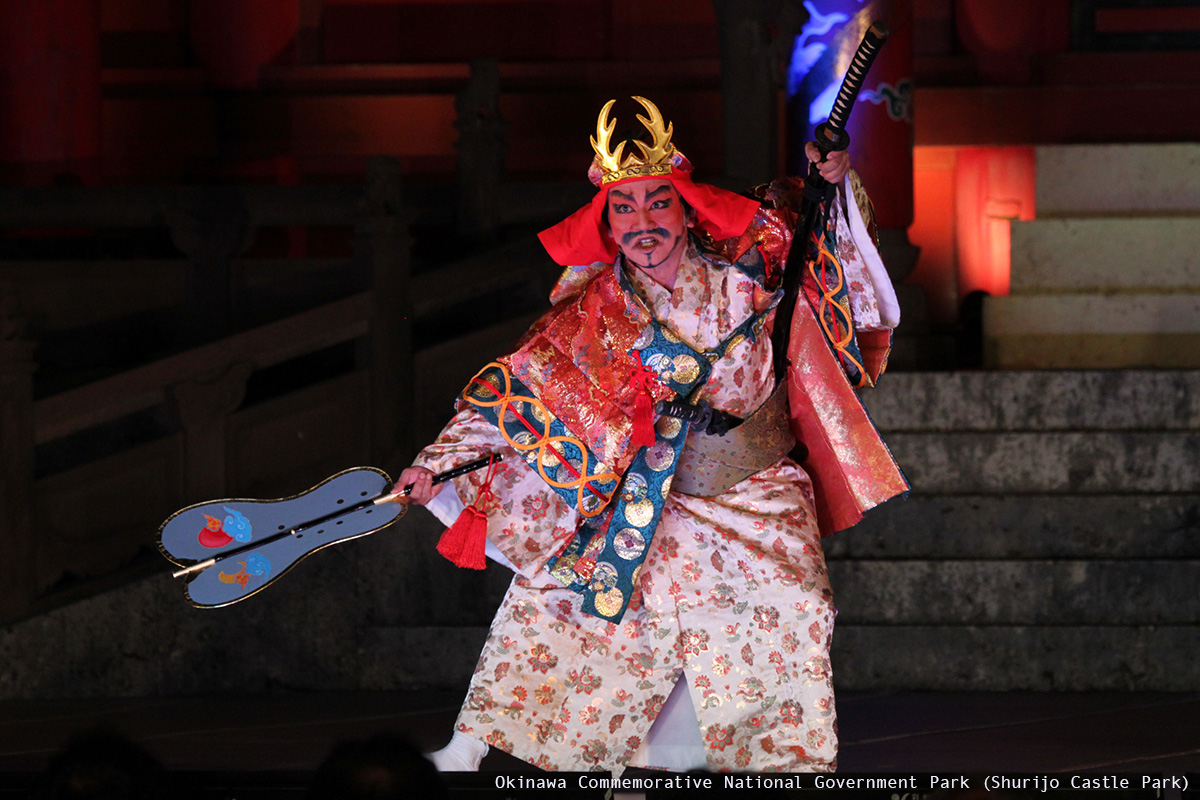 Classical music and dance performances can still be found in Okinawa, most readily at the National Theatre Okinawa. These snapshots of a bygone era are certainly a spectacle not to be missed. However, in recent years questions of how to best preserve and present the rich classical performing arts have been raised, stimulating efforts to revive lesser-known aspects of the classical performing arts, something that the Ryukyu Traditional Performing Arts Design Lab has actively pursued. In 2020, the lab received a Good Design Award for its efforts to re-create the small-scale performances of classical dance and music found beyond the walls of Shuri Castle. 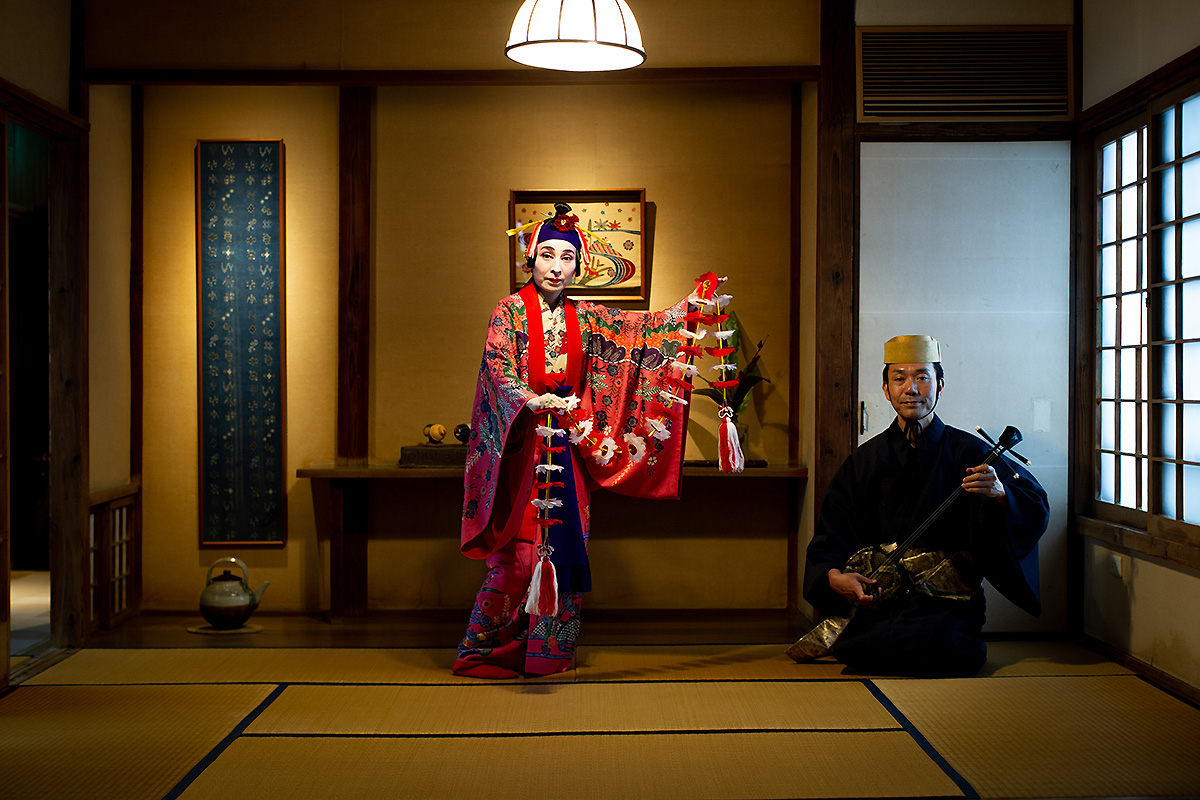 As there were no larger stages available outside the castle, performances were restricted in numbers of artists by necessity. The small troupes would perform in very close vicinity to members of the royal court and visiting dignitaries. These confined spaces, such as private residences and tea houses, created a unique and very intimate space, allowing guests to closely observe dancers and precisely hear every musical note of the musicians, all while enjoying the heights of Okinawan cuisine and the finest awamori liquor to be found anywhere.

A step beyond formalized court ritual, these intimate offerings of the kingdom’s refined culture were the very essence of Okinawan “Utuimuchi” (hospitality in Okinawan language). Yamauchi Masaya, Director of the Ryukyu Traditional Performing Arts Design Lab, also believes that these performances can be identified as the origins of Okinawa’s classical performing arts. In this spirit, Yamauchi, a master of classical sanshin, performs classical uta (singing) and sanshin pieces alone, accompanied only by a single dancer. Attending such a performance is a unique opportunity to experience something that was only ever available to royalty and VIPs during the Ryukyu Dynasty. It is an opportunity I was only too happy to take up! 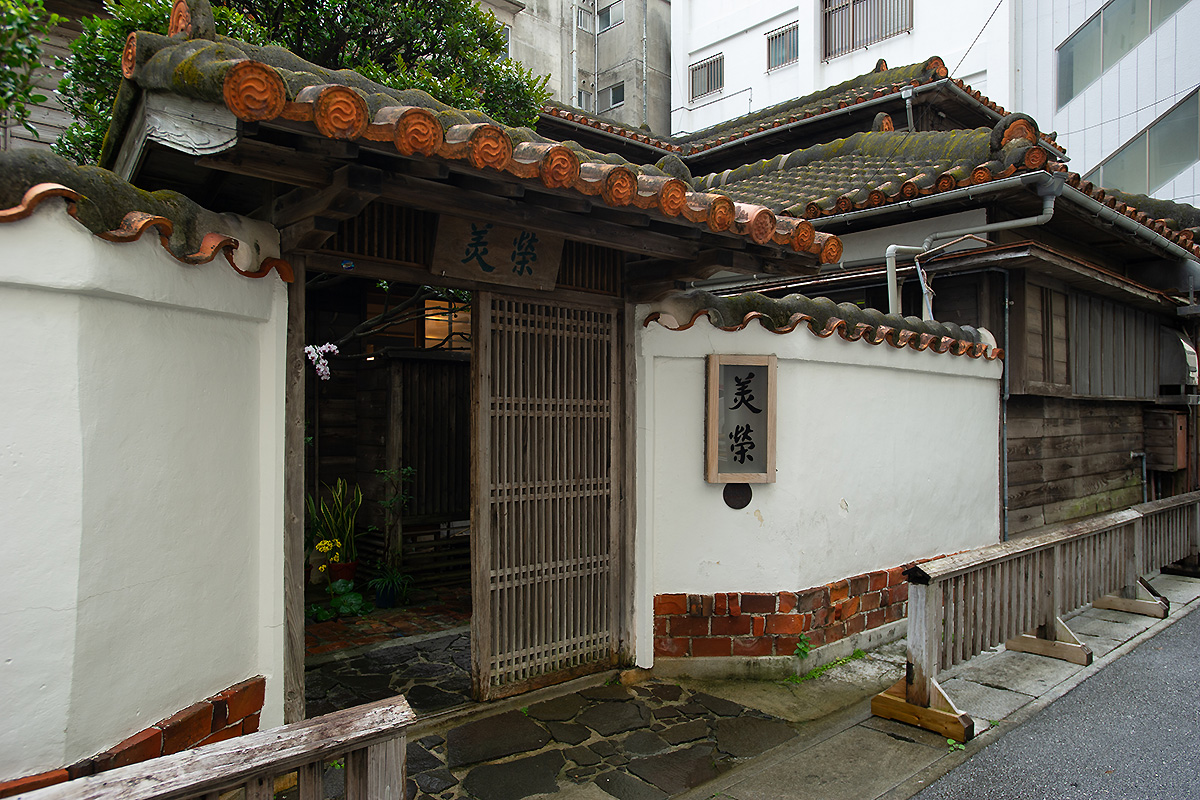 I arrived at the performance space Ryukyu Cuisine MIE with enough time to soak up the atmosphere. As soon as I passed through the gate, I felt a sense of peace brought on by the pond, the manicured garden, and a fine old traditional wooden building. More than a restaurant dedicated to recreating dishes once served to the nobility, it’s an oasis of a bygone era sitting within, yet apart from, the bustle of surrounding downtown Naha. It is the perfect setting for my intimate experience of classical Ryukyu performing arts. Ascending the stairs, I took my seat in the upstairs tatami room and expectantly waited with eleven others.

The audience is hushed as Yamauchi takes his position on the tatami. There is an almost audible collective intake of breath accompanying his first note. The sanshin continues to build tension in the room, when suddenly, Yamauchi’s crystal-clear singing voice sounds out, and the delicate interplay between song and sanshin begins in earnest. Although I am not familiar with the Ryukyu language, it was unnecessary to understand the lyrics to know deep emotions were expressed – I could feel them reverberating in my chest. I had been so transfixed on Yamauchi, a figure seemingly transported hundreds of years into the future, that I had not even noticed the figure of an ornately decorated dancer in a brightly colored kimono making her way silently to the center of the room. 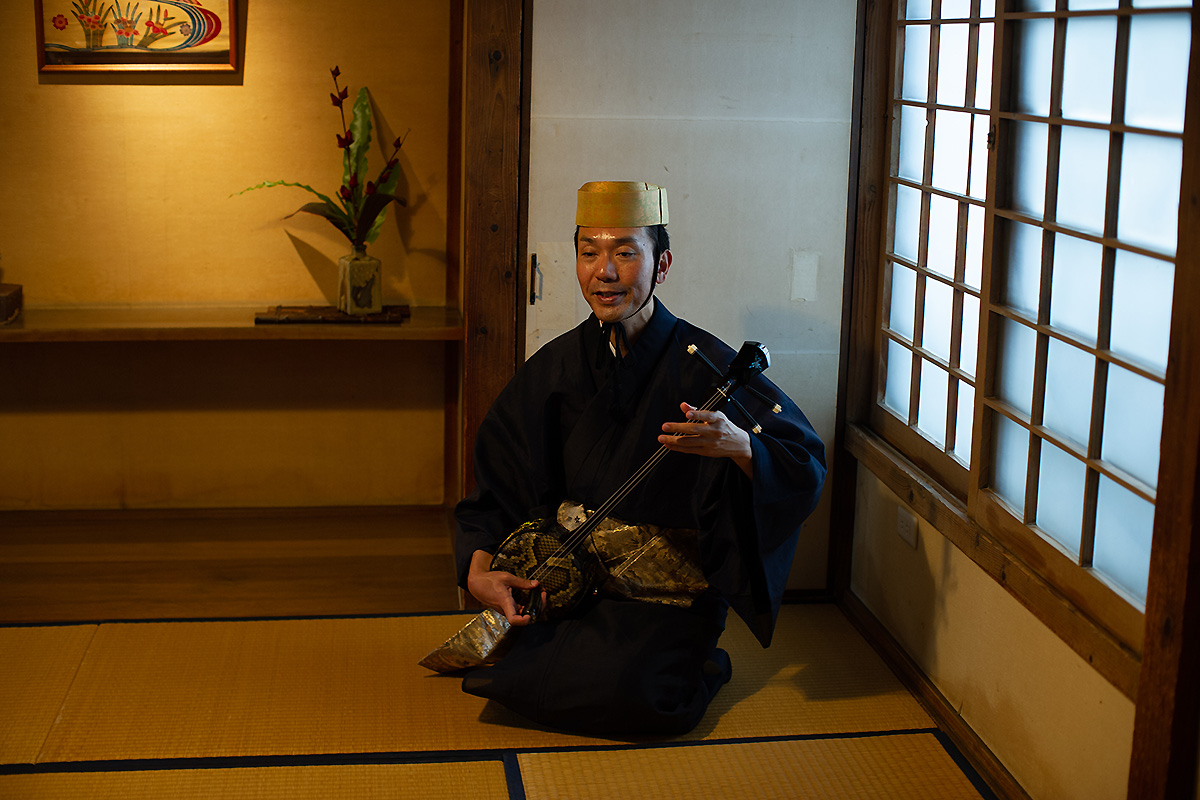 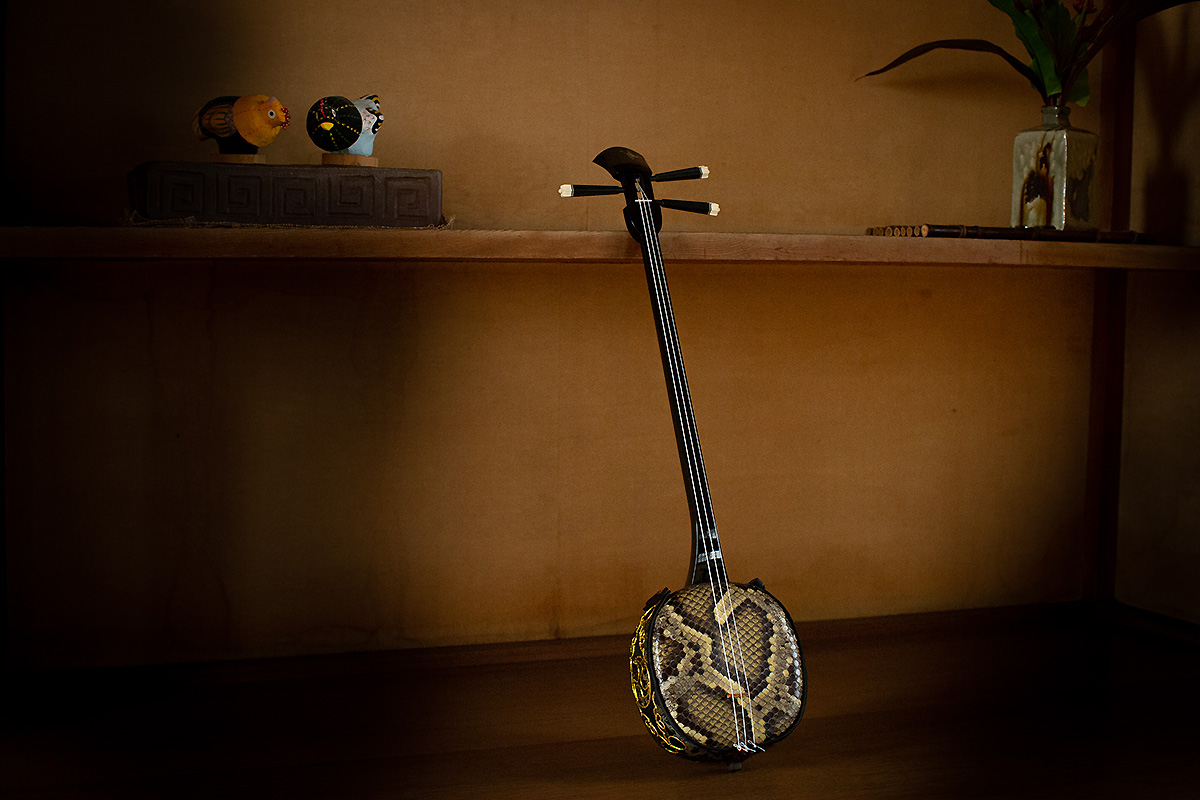 The second song of the day, “Nakankaribushi,” is a love song that says, “I will hang a bamboo screen on the back door of my house. Please use it to come and see me.” After a short explanation of the lyrics, Yamauchi returned to his sanshin. The doll-like dancer comes to life, slowly, meticulously controlling every movement, as her body flows elegantly as if riding the waves of the sounds filling the room. I am drawn to her eyes. They are a fascinating combination of deadpan yet deeply intense. They are telling the story as much as her elegant twirls, gesturing feet and hands, and the effortlessly directed stall of flowers obviously so important to the story being relayed. The dance movements are understated and eminently graceful. Every limb and expression is precise and flowing, seemingly in a dialogue with the song lyrics, and all heightened by the piercing and melancholy sound of the sanshin. 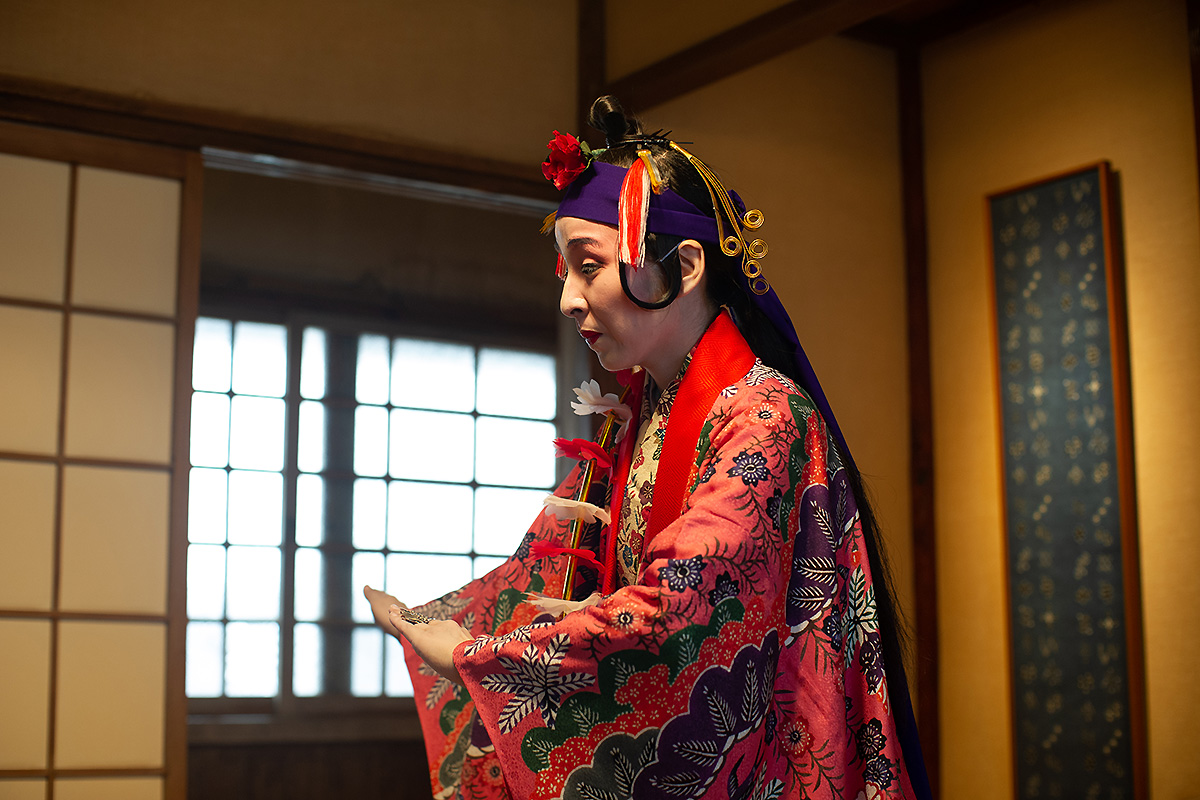 Food and drink are essential to hospitality

Four songs later, not only do I feel like I have had a peek into a world of hospitality fit for nobility, but I am also left with a curious feeling of heaviness and lightness, almost as if I had taken part in a religious experience. Still reveling in this glow, the audience made its way down to the dining room as the second act, a culinary extravagance was waiting for our presence. 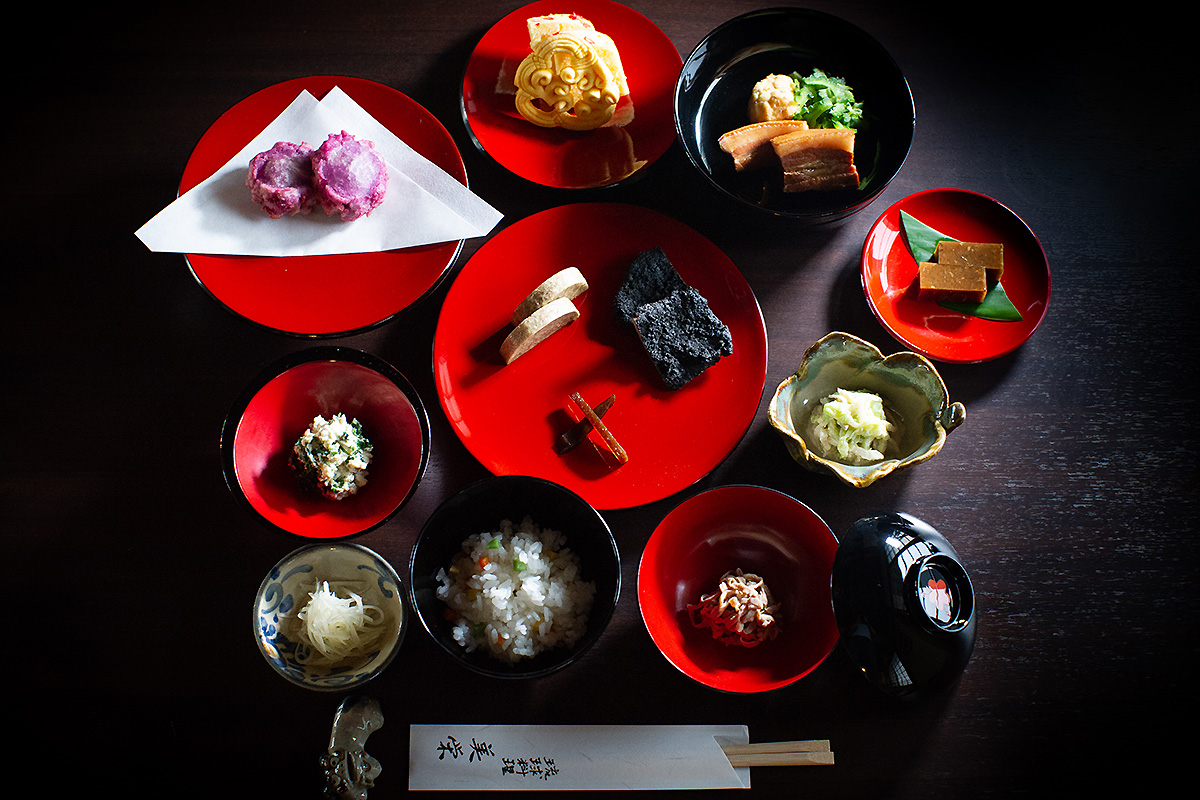 Seated around a long wooden table, we listened attentively as Yamauchi explained the symbiotic relationship between the artistic performance we had just witnessed and the culinary delights that would have been accompanied them. Hospitality in the Ryukyu Dynasty was obviously a big deal, and I could not wait to delight my taste buds.

The course set meal lost nothing in the artistic presentation to the first act, with the decorative lacquerware containing a succession of expertly crafted dishes. While most were unfamiliar to me, they were invariably delighted. The maître d’ carefully explained each dish’s origins and characteristics, leaving me deeply impressed with the skill and effort it took to create such works of culinary art. 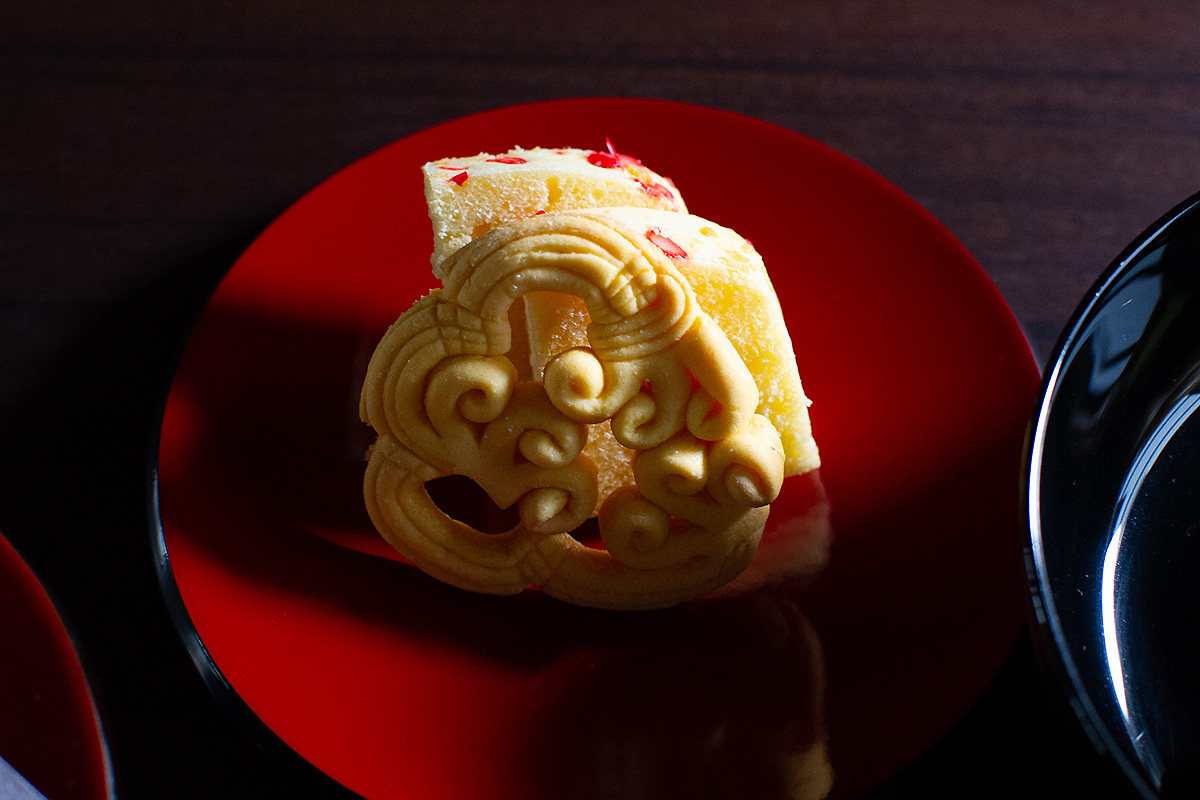 As my experience wound up, I found myself more than a little envious of the nobles of yesteryear that would have been able to enjoy such finery regularly. To subdue these thoughts, I made a promise to myself to return sometime for the dinner menu, it would be an opportunity to indulge in some fine awamori liquor, that final and essential element that would genuinely fulfill VIP hospitality criteria in the Ryukyu Dynasty era.

Posted on January 20th, 2021
Text by Steve Jarvis
Steve Jarvis is a long-term resident of Japan who has recently relocated to the Okinawa Prefecture.

The traditional performing arts of Okinawa are quite diverse, ranging from dance to music and plays. ...
Read More

Okinawa openly welcomed the knowledge and skills gained through trade and exchanges with Japan and China ...
Read More