Karate – Okinawa’s Bridge to the World

Standing at the crest of Naha’s famous shopping strip Kokusai St., I could see hundreds of meters of crisp white karate uniforms lined neatly in rows moving with precise and fluid movements. My time in Naha had coincided with the Karate Day, and being a bit of a martial arts buff, I took the opportunity to see one of the most impressive displays of martial arts to be found anywhere on the planet. 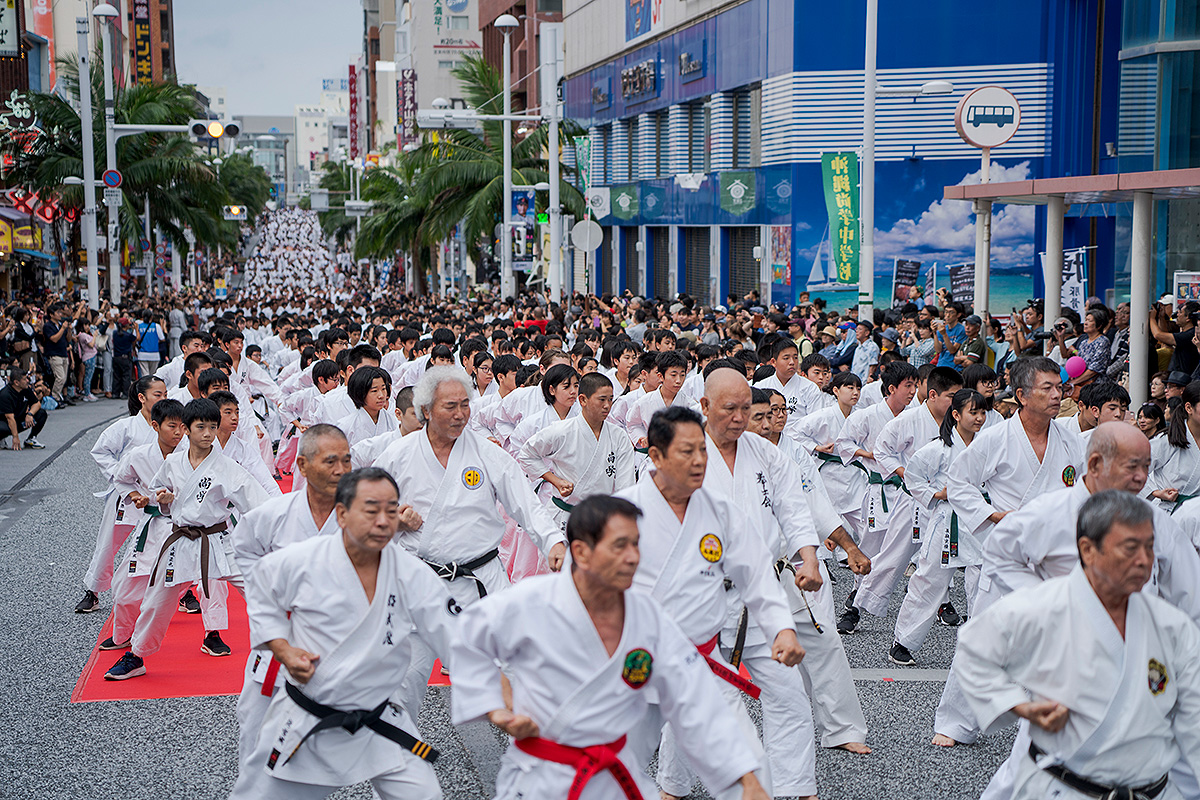 October 25th is Karate Day, and on the weekend closest to this date thousands of practitioners from around Japan and throughout the world descend on Kokusai St. to demonstrate their art. While I knew it would be a large event, I hadn’t anticipated the diversity of ages and especially nationalities of the attendees and was frequently surprised to find myself surrounded by groups of people in karate uniforms speaking languages I struggled to identify, let alone comprehend.  A truly international event, the Karate Day Commemorative Performance was established to recognize Okinawa’s most famous contribution to world culture, and evidently, the world was more than happy to join in. 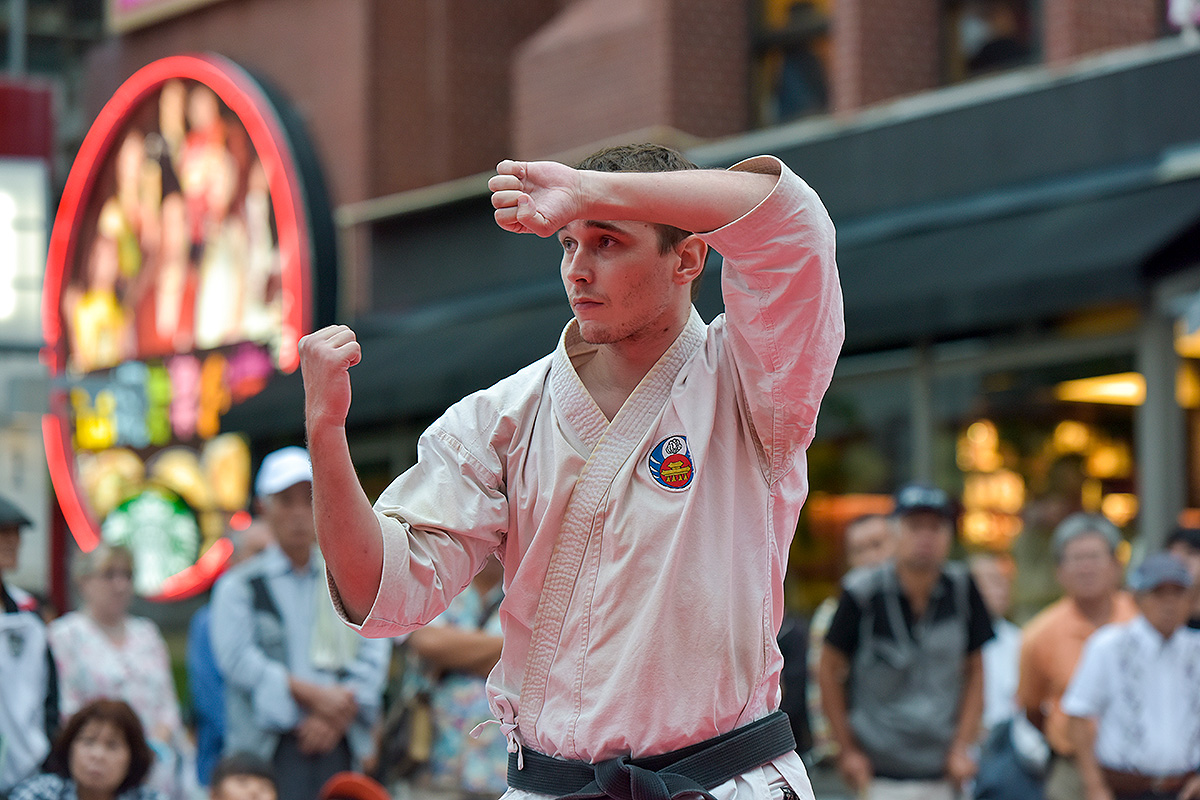 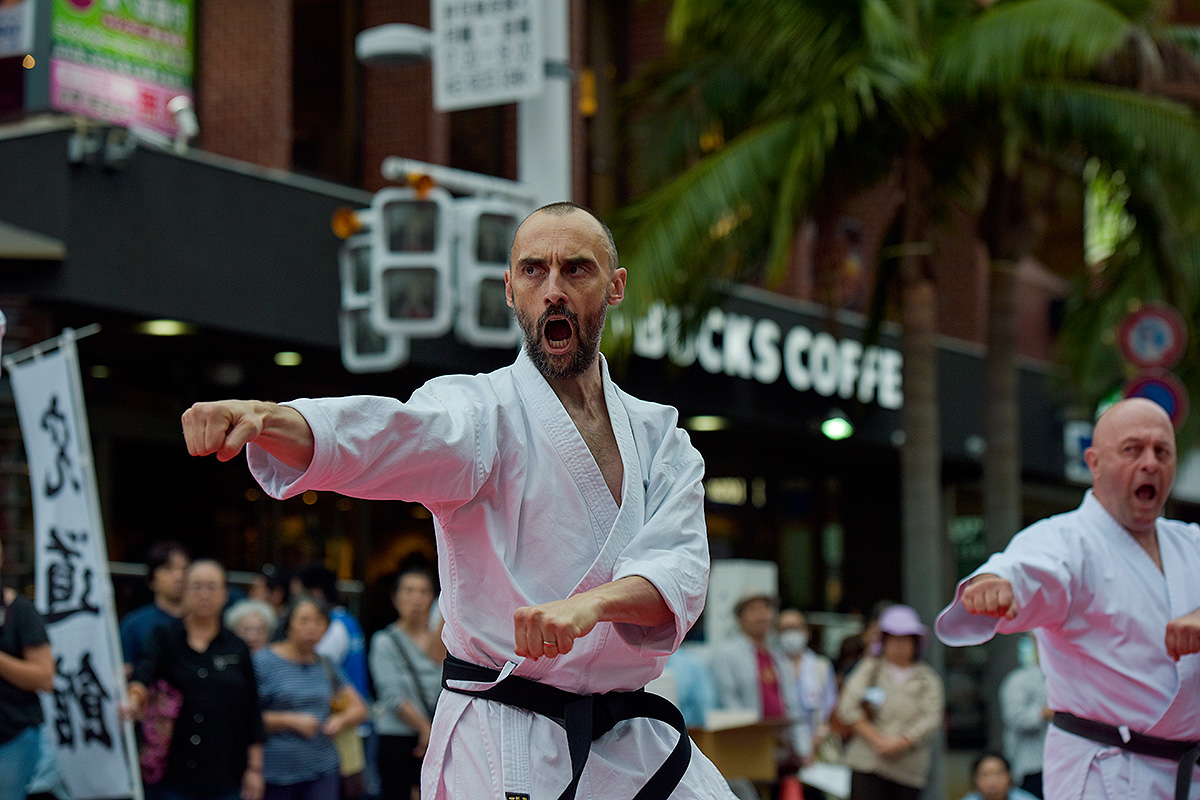 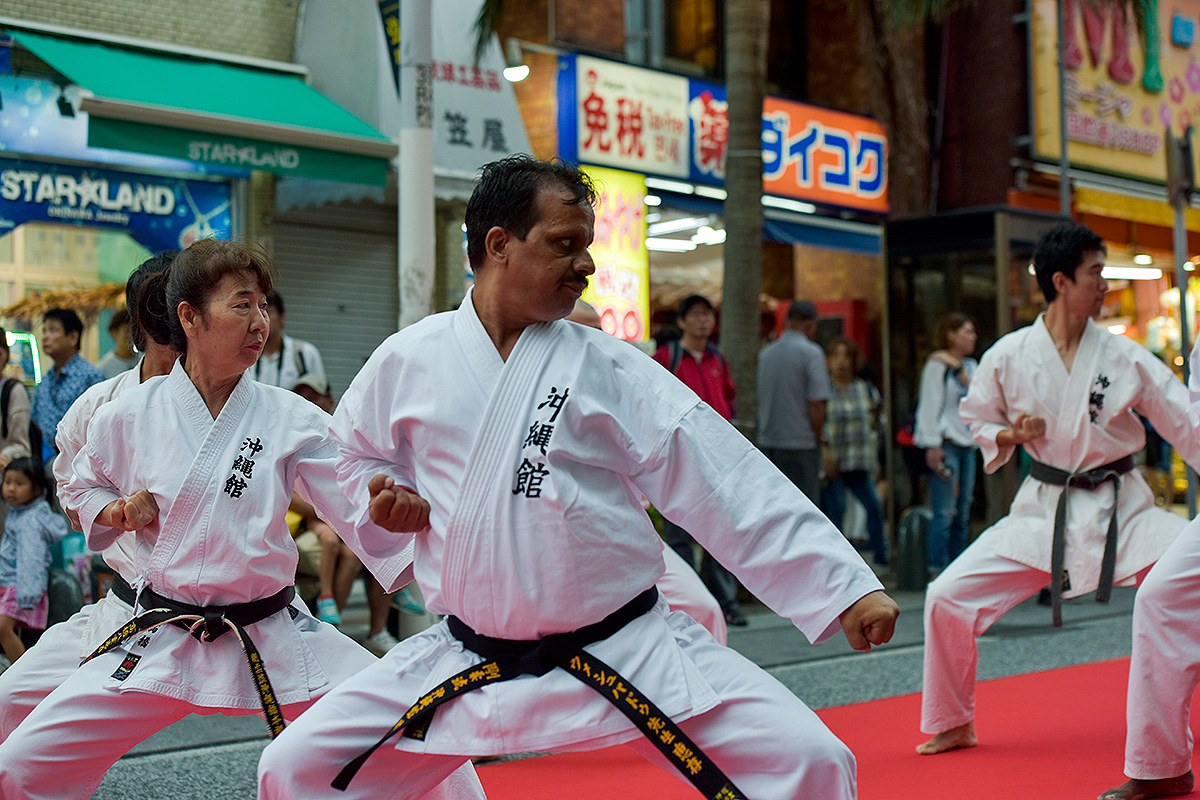 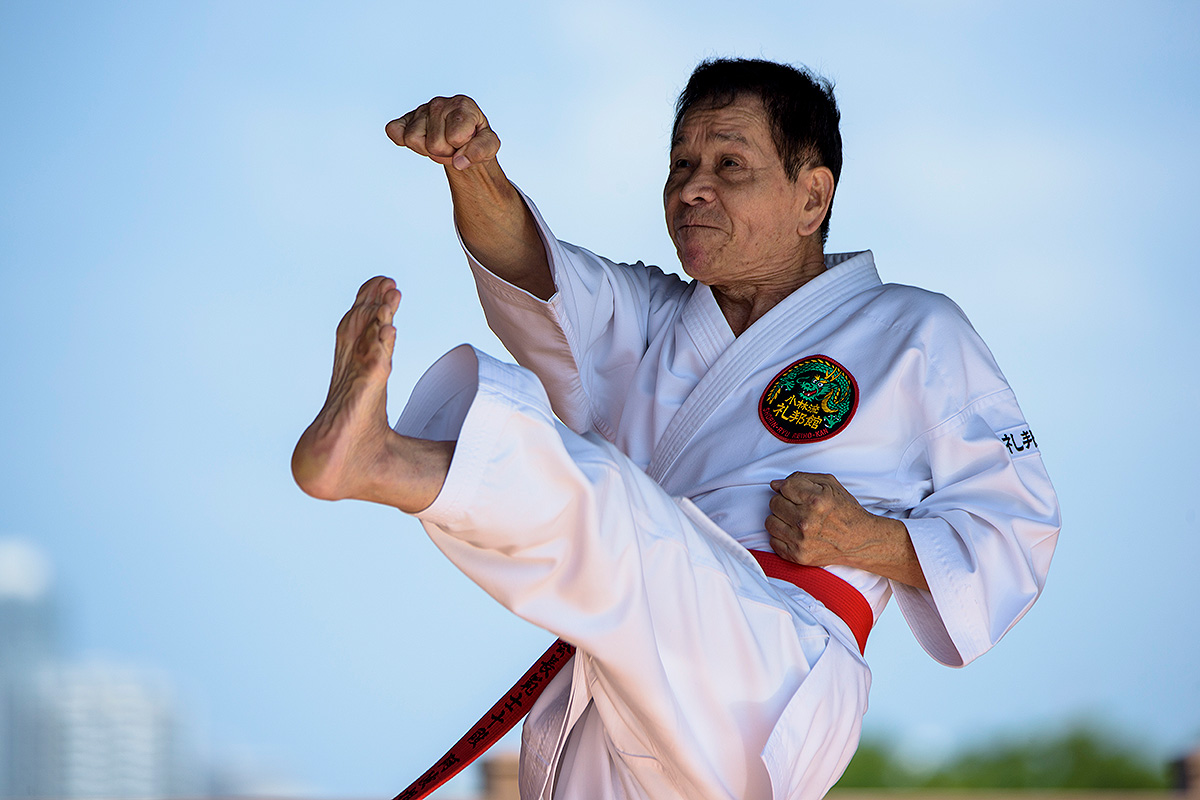 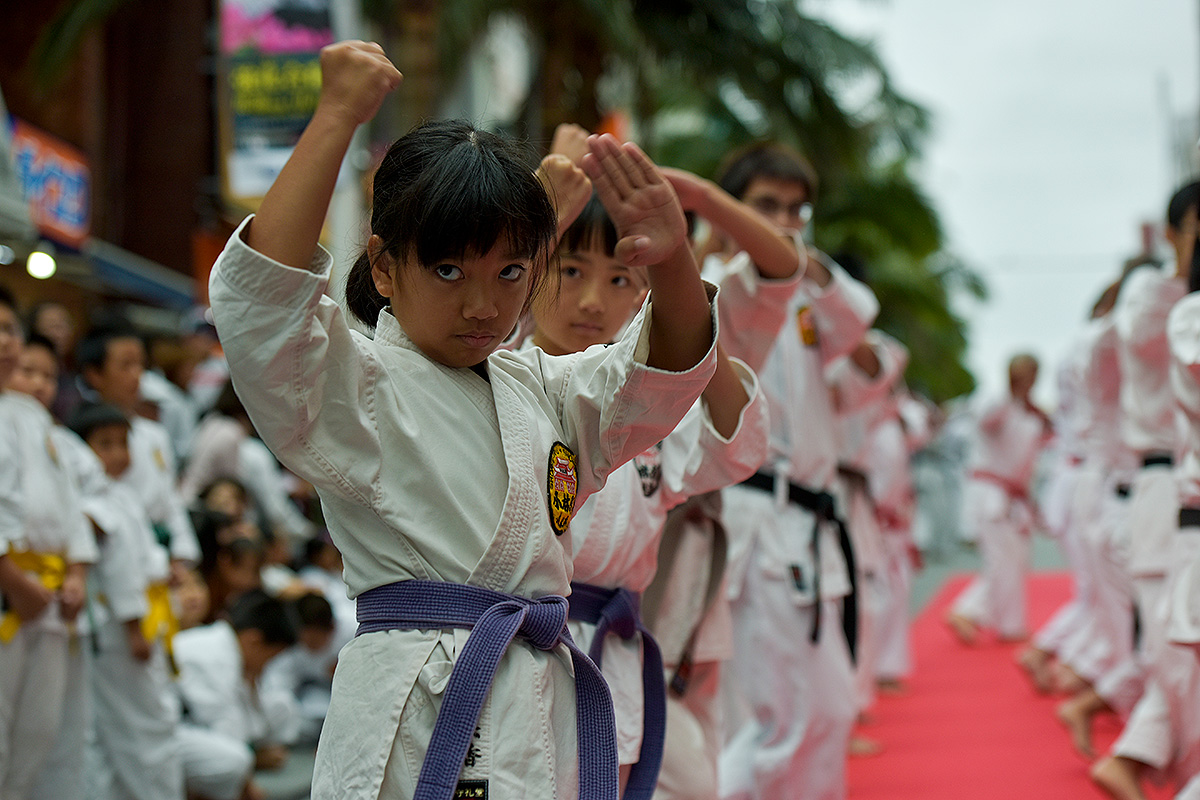 For all the apparent diversity, as soon as the karate kata (individual techniques arranged into a flowing combination) began you soon realize that the thousands of participants are moving in unison. Their powerful moves underscored by the synchronized thud of feet stamping the ground and cries of exertion might come across as a bit intimidating, but the reality could not be further from the truth. Wherever I went there were friends, and friends soon to be made, greeting each other, and groups patiently waiting their turn on the performance arena admiring the kata of fellow practitioners. For all of the flying fists and kicks, I was immersed in an atmosphere of harmony and fraternity.

To the Home of Karate 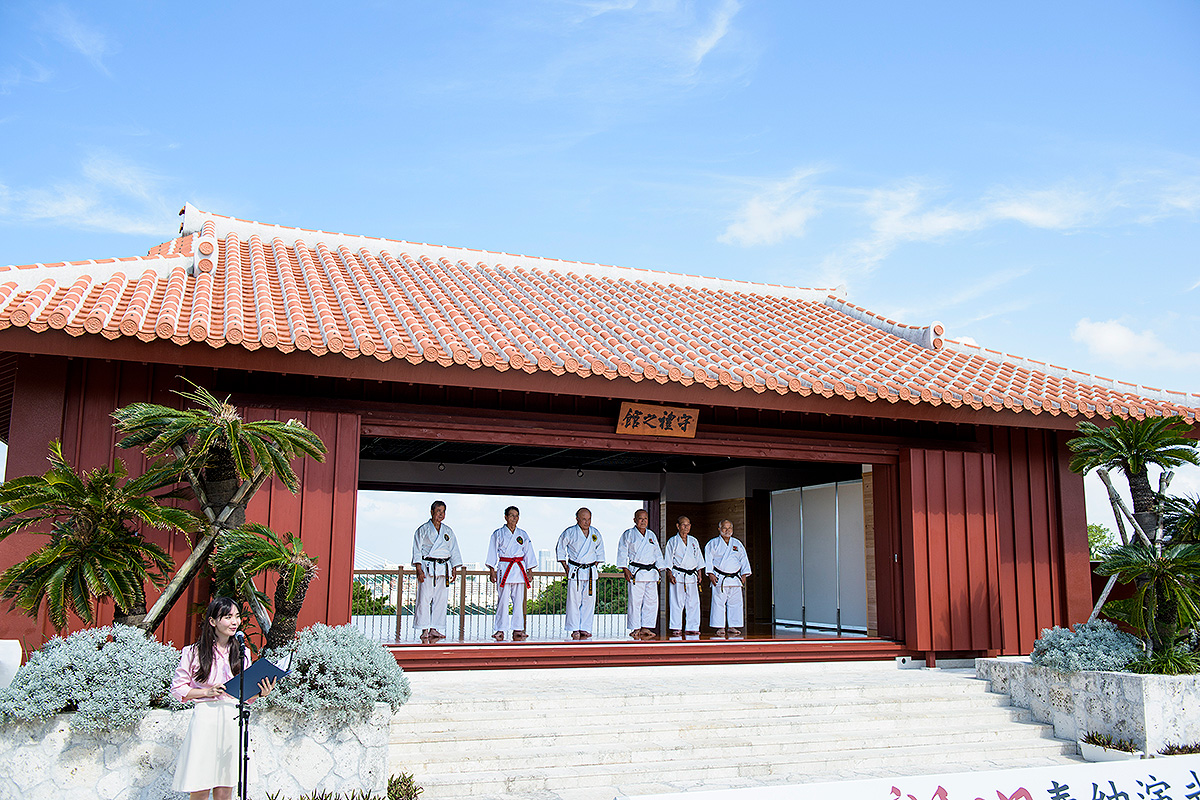 My interest in karate was piqued and the next logical step was to take a short bus ride to visit the official home of Okinawan martial arts, the Karate Kaikan, in the neighboring city of Tomigusuku. The highlight of the facility is an immaculate traditional wooden dojo, its eye-catching vermilion exterior is perfectly framed by an excellent view overlooking Naha and surrounds. It’s at this sacred space that every year on Karate Day the grandmasters of the various styles of Okinawan karate come to demonstrate the very pinnacle of karate practice.  Noting the large training dojo and an assortment of food and karate goods available, I made a beeline for the exhibition facility to get a crash course on karate, its roots and philosophy.

While it is well known that karate originated from Okinawa, it wasn’t until I had made my way through the exhibition that I fully understood the extent to which the story of karate actually “is” the story of Okinawa. An ancient art practiced by the warrior class of the Ryukyu Kingdom, like the Ryukyus it was enriched during the Kingdom’s golden age of trading by flows of knowledge and people from the surrounding countries, and particularly China. These elements both indigenous and imported were mixed, matched and adapted, and infused with the spirit of the Okinawan culture to create a truly distinct art that goes far beyond martial prowess.

During the demonstration on Kokusai St., I was fascinated by the weapons being wielded with immense precision. The small tridents (sai), wooden staff (bo), and the iconic nunchaku, were familiar from action movies, but I was taken aback to see the vast range of everyday items, even boat paddles, that also have a place in Okinawan martial arts. It was my introduction to the broader martial tradition of these islands, known as kobudo, where weapons feature as prominently as the empty-handed styles most often associated with the practice of karate. 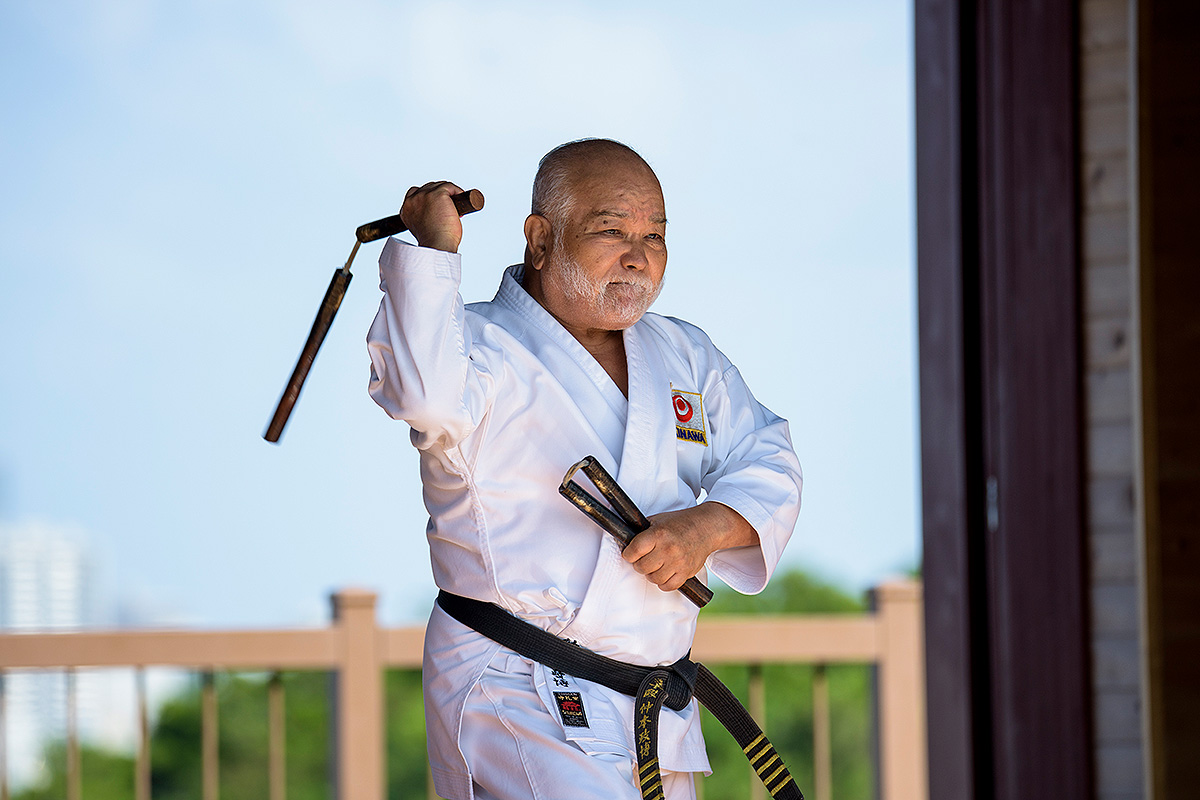 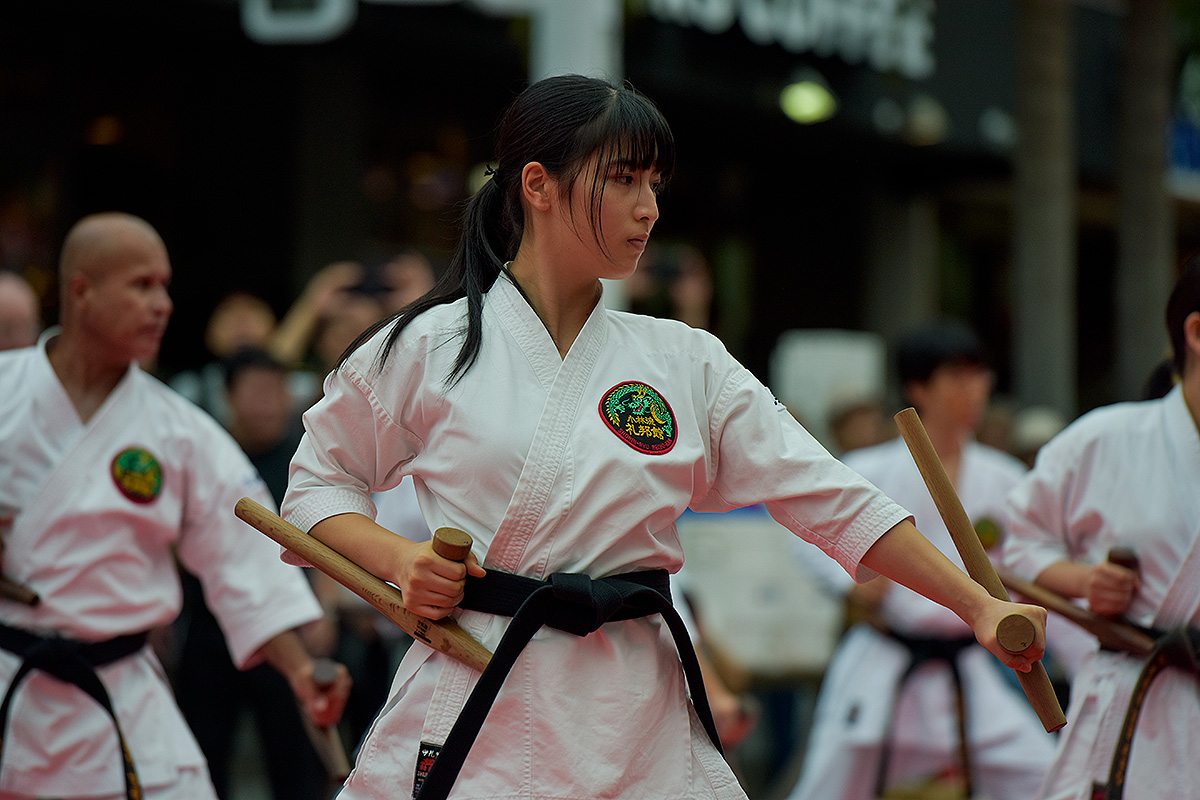 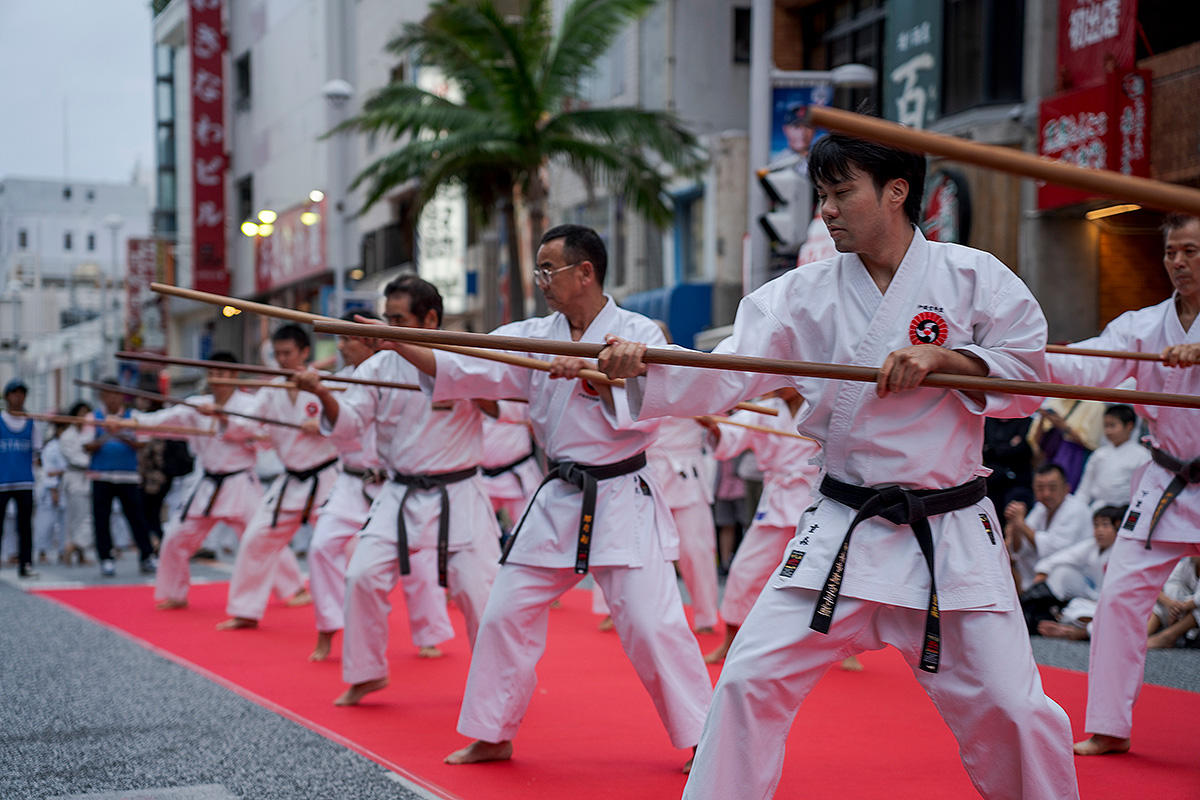 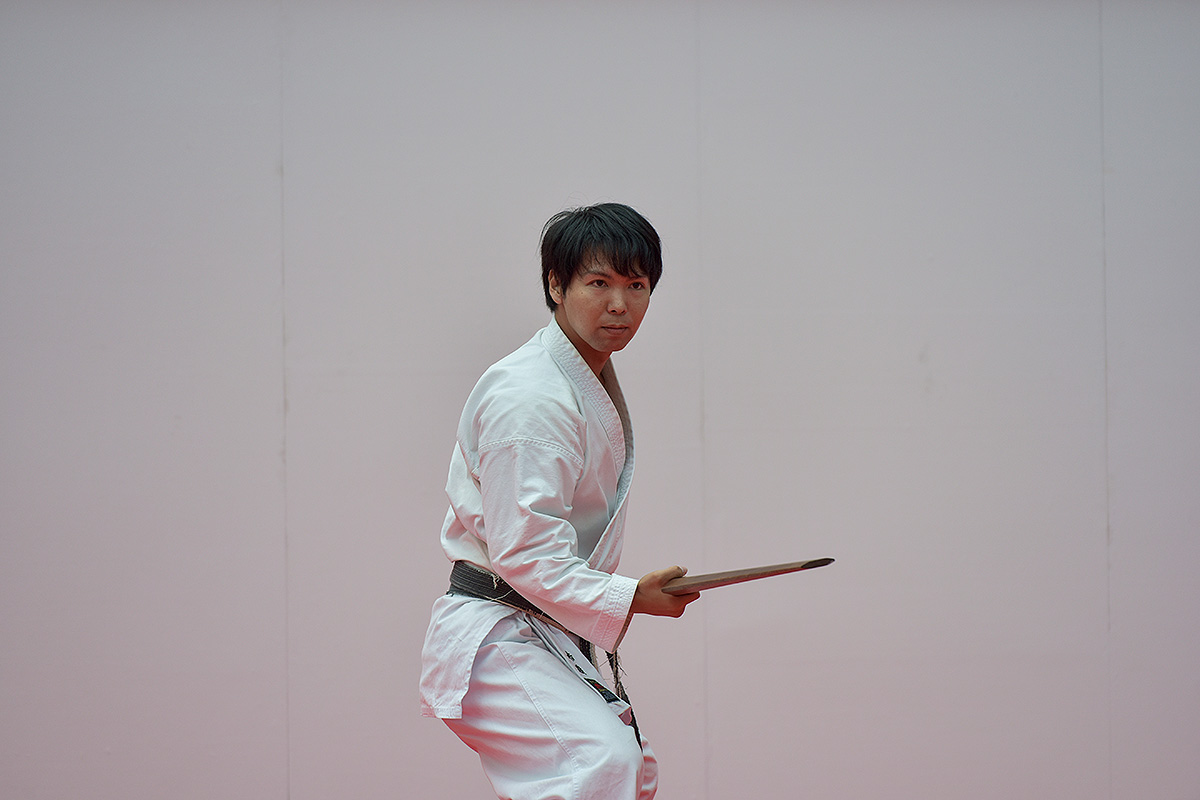 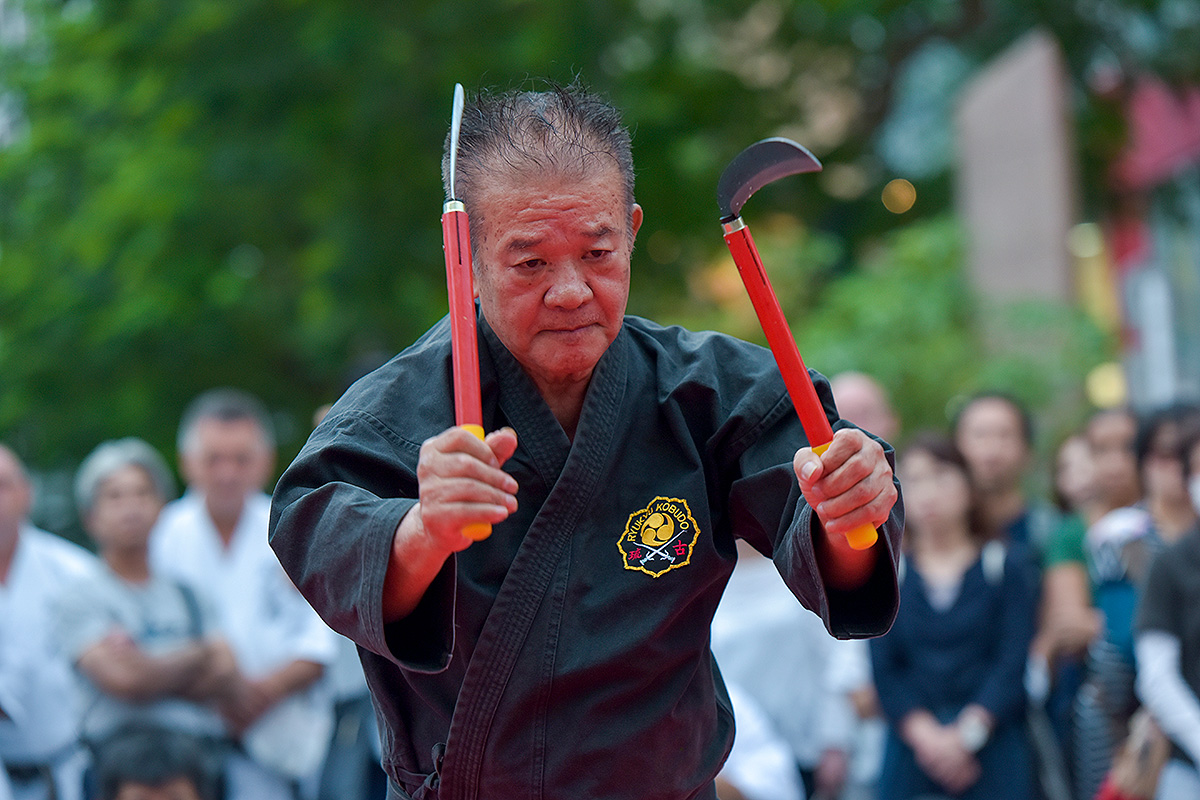 The journey of Okinawan karate from the domain of warriors, to its refinement as an art form within the walls of the Kingdom’s castles, reflects the history of the Ryukyus as the islands were increasingly drawn into the sphere of Japan. Absorption into the modernizing Japanese state saw karate make its way to the mainland and stimulated modern karate’s founding figures to consolidate the ancient skills and techniques into a systematized martial art. Various styles emerged, which grew in number as karate was spread beyond Japan by Okinawan immigrants to Hawaii and the Americas. Another wave of internationalization came as US soldiers stationed in Okinawa post-WWII took their passion for karate with them on their return home.

That karate has spread to all corners of the globe and is practiced by some 130 million devotees in 194 countries, is deeply impressive. However, the more I dug into the development of karate, the more I came to appreciate the non-martial side of this art. The demanding training will certainly make your body stronger, but it is the effect of this sustained focus on the physical that develops character and self-confidence where the most profound effects are to be gained. 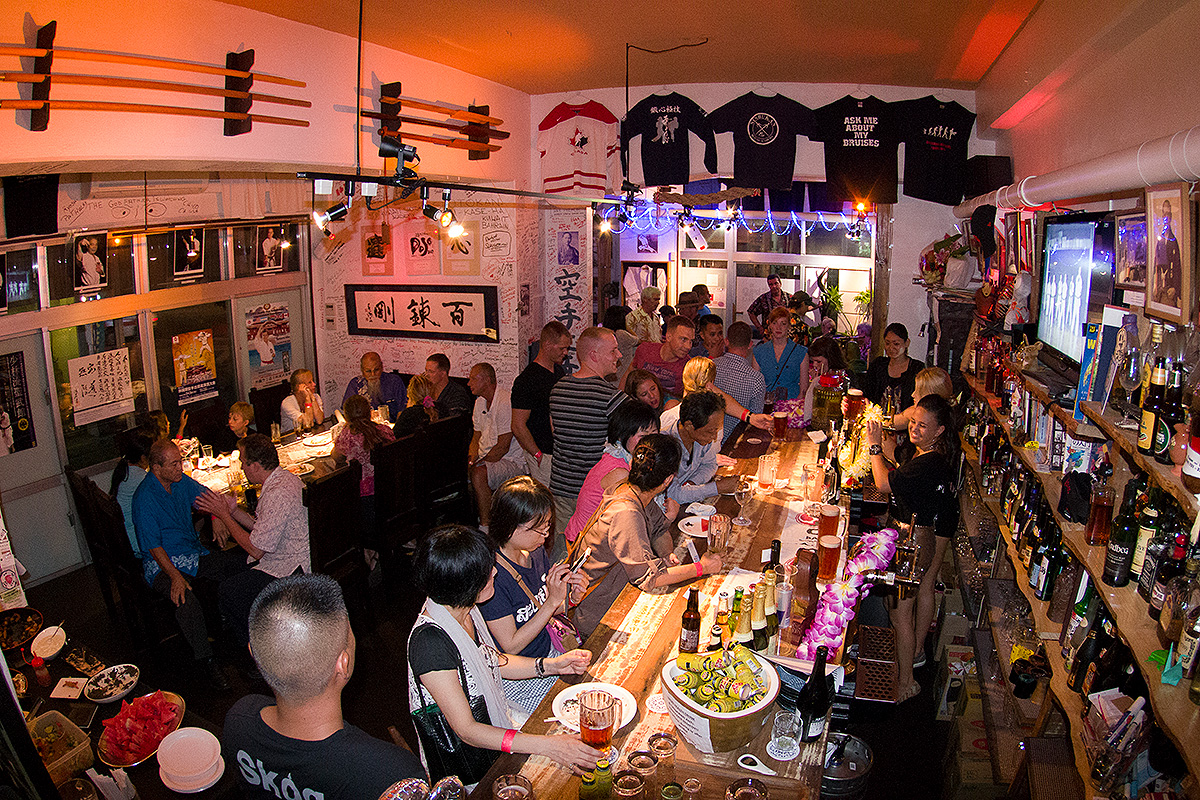 I decided to wind up my day of karate with a visit to the Dojo Bar, a social hub for karate practitioners visiting Okinawa and a place of intrigue for any martial arts fan. Stepping through the doorway you soon realize this is no ordinary bar. Lethal weapons and portraits of venerable karate masters feature prominently, and the walls are covered thick with signatures and messages of martial arts devotees from around the planet. Not sure of how a relative novice like myself would be received, I was pleasantly surprised to find the patrons friendly and keen to talk about their love for karate and how it has added to their lives.

I met frequent visitors to Okinawa, training at the home dojo of their particular style as a way to accelerate their practice and gain a deeper understanding of their art while others had deliberately scheduled a stop in Okinawa as a part of a longer trip to Japan, like a pilgrimage paying respect to the roots of an important part of their daily lives. There were also a few people on a more structured karate tour of Okinawa, that took them to a range of dojo to practice, but also included visits to sites of historical and cultural importance. Still others, like me, were drawn to the bar to go beyond knowing karate from the movie screens to get a little taste of the real thing.

While I had only spent a day absorbed in the world of Okinawan karate, it was long enough to appreciate how deeply it affects people and the important, even defining, role it can play in their lives. But I came to realize something even more profound. Karate is one of the most significant remnants of the Ryukyu Kingdom and embodies its culture of harmony, openness, hospitality, and emphasis on peaceful relations. I can’t help feeling a little envious that no matter where a devotee of karate may live, they will always have a piece of Okinawa with them.

Text by Steve JarvisSteve Jarvis is a long-term resident of Japan who has recently relocated to the Okinawa Prefecture.

Reletad Contents
Karate
Karate is a very popular form of martial arts along with judo and kendo, and Okinawa is said to be the place of its origin. ...
Read More
【Blog】Okinawa Karate Kaikan
Learn the Essence of Karate from its Birthplace. Karate is said to have many enthusiasts around the world. The sport has also been made an official event at the 2020 Tokyo Olympic Games. ...
Read More
Okinawa Karate International Seminar
Held over six days with the goal of allowing karate practitioners from all over the world to experience the essence of Okinawan traditional karate and ancient martial arts and to further increase their skills and cultivate their m...
Read More