A One Day Trip in Naha with a Dash of Karate

Okinawa boasts some of the best beach resorts in Japan, visited by many domestic and foreign tourists, but did you also know that it is the birthplace of karate? There are some 130 million karate enthusiasts around the world, including myself. As such, I would like to introduce my encounters with karate that I experienced during my self-guided one-day sightseeing tour of Naha.

Naha Airport features easy-to-use digital signage for public transportation and searching for routes and directions on your smartphone is a breeze as well. For those who do not want to worry about renting a car or who do not drive, the Google Maps app provides convenient bus and monorail route information, so sightseeing is a snap. 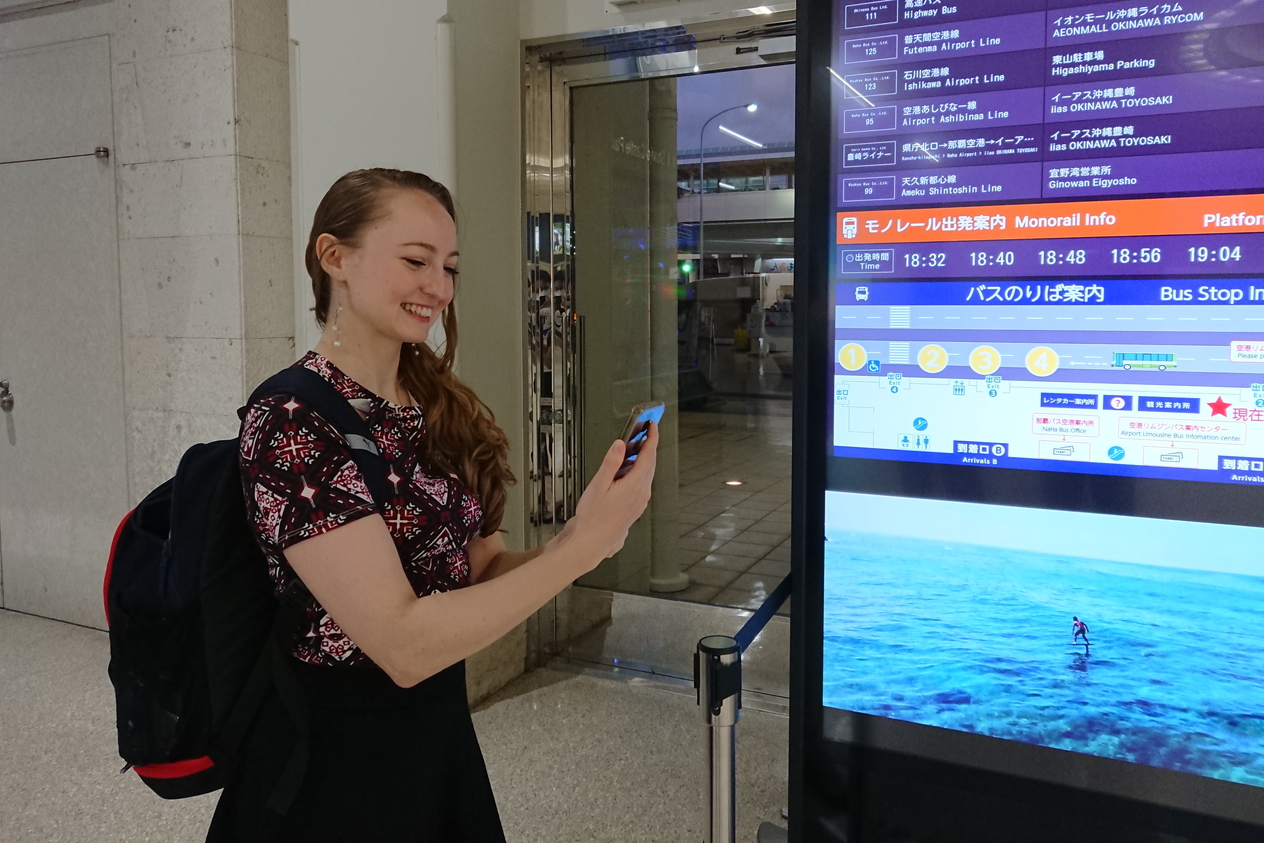 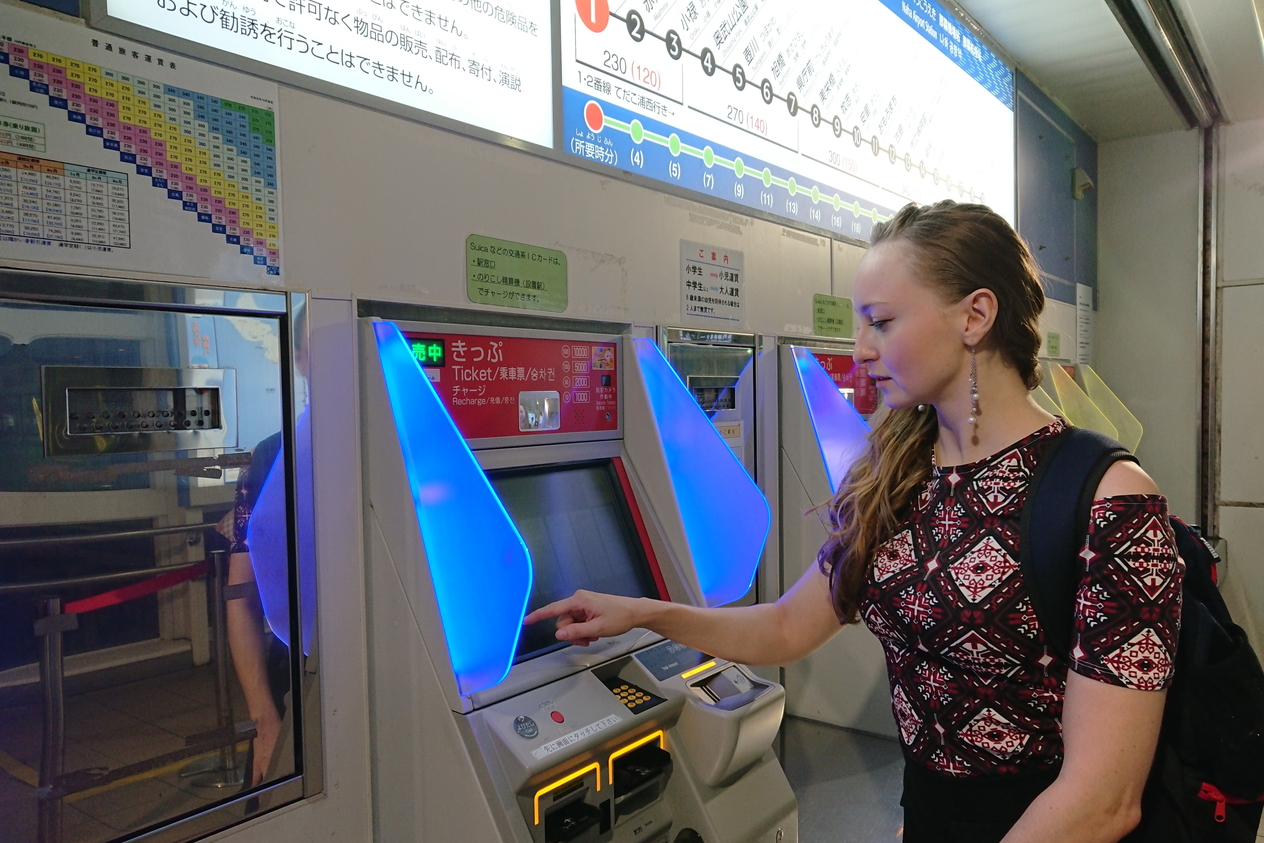 I decided to take the Yui Rail Monorail to Shurijo Castle, the ancient seat of the Ryukyu Kingdom. There is a record of students training in karate in the castle courtyard from an old photograph, indicating the historical connection that Shurijo Castle has with karate. Moreover, certain members of the Ryukyuan nobility trained in a form of karate to protect the royal family. While the main palace building (Seiden) was lost in a fire last year, most of the current Shurijo Castle Park area is open to visitors. Built up and in use as a royal residence and administrative center between the 15th and late 19th centuries, the winding walls, elaborate gates, and various traditional buildings give an aura of regal solemnity.

The highlight of the visit was a photo opportunity at Shureimon Gate (“Gate of Propriety”), one of the representative gates leading to the castle. 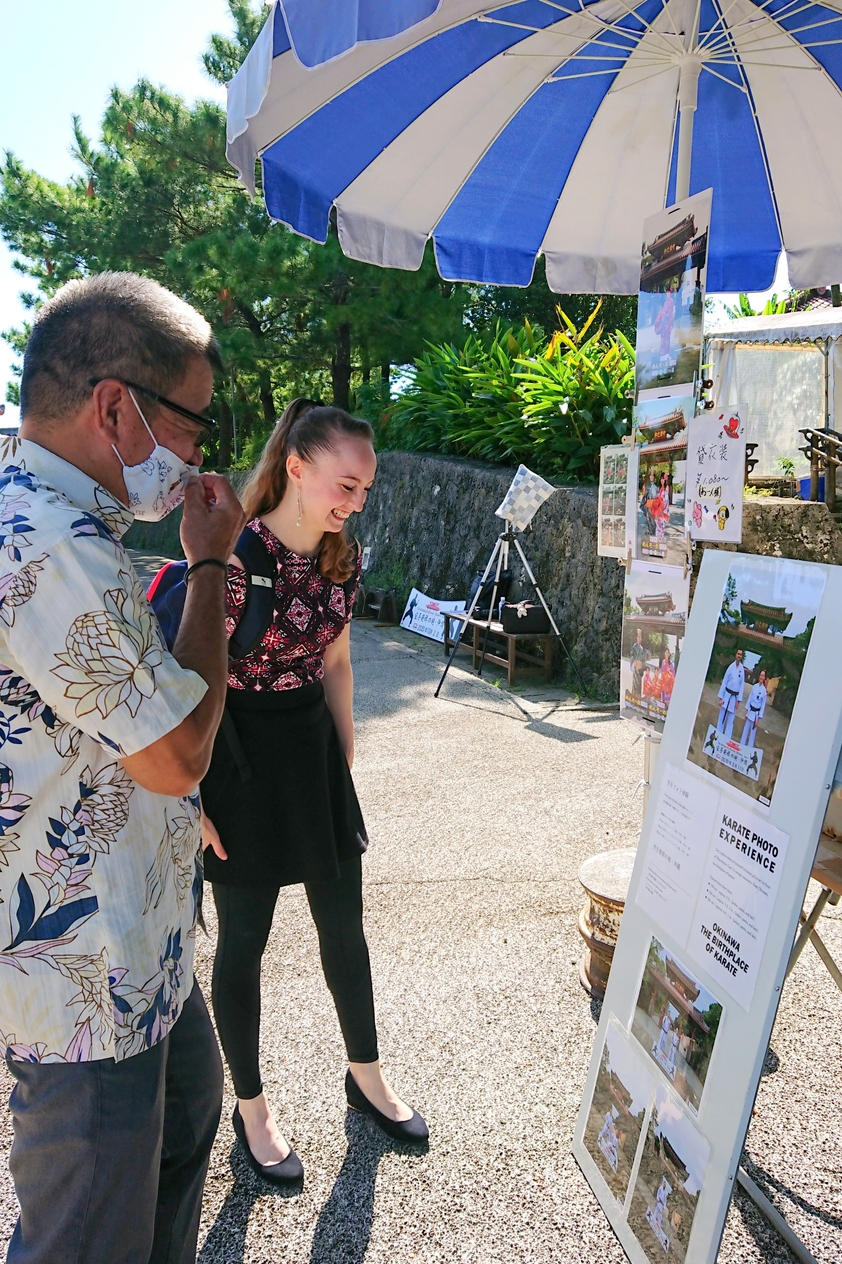 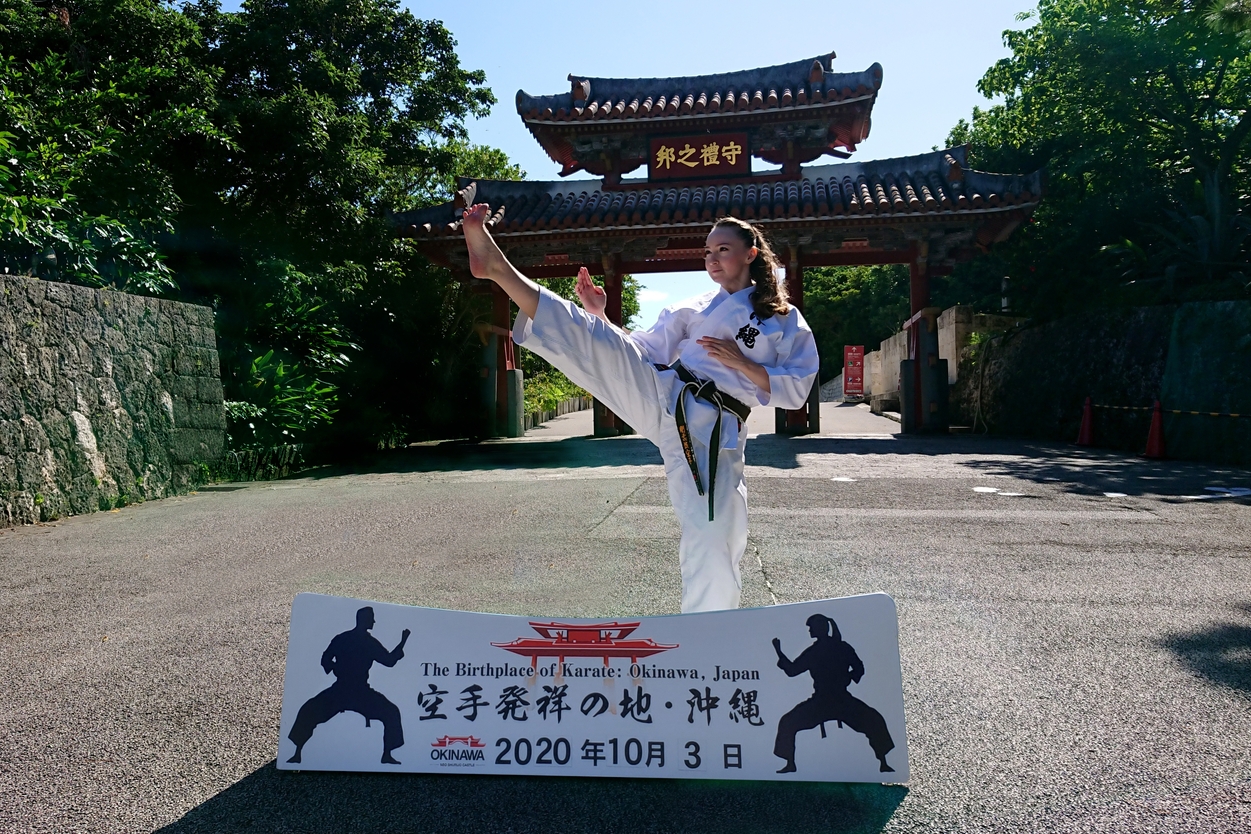 Here, visitors have a chance to take a photo with the gate as the backdrop wearing a costume from the Ryukyu dynasty days (Ryuso) or a karate uniform (karate-gi). Visitors who want a print photo can choose from three sizes (S: 2,200 yen, M: 3,300 yen, L: 5,500 yen; S size cannot be mailed overseas) or pay only 1,100 yen for a smartphone snap (all prices inclusive of tax). The fee includes the costume rental. I chose to wear a karate-gi. The man operating the photo experience took photos for me in front of a specially designed placard while I performed some karate poses or kata. Emblazoned on the placard was the phrase “The Birthplace of Karate: Okinawa, Japan”, and being able to perform karate in such a historical and hallowed location instilled a sense of indescribable awe in me.

Awamori and a Surprising Karate Connection

The next stop on my trip was Zuisen Distillery, located in a leafy neighborhood just south of Shurijo Castle Park. The friendly staff took me on a short, guided tour of the facilities, and I learned about awamori, the local fire water. Visitors who want a guided tour should book in advance, and Japanese-speaking staff are adept at guiding foreign tourists (An introductory video about awamori is subtitled in English.). 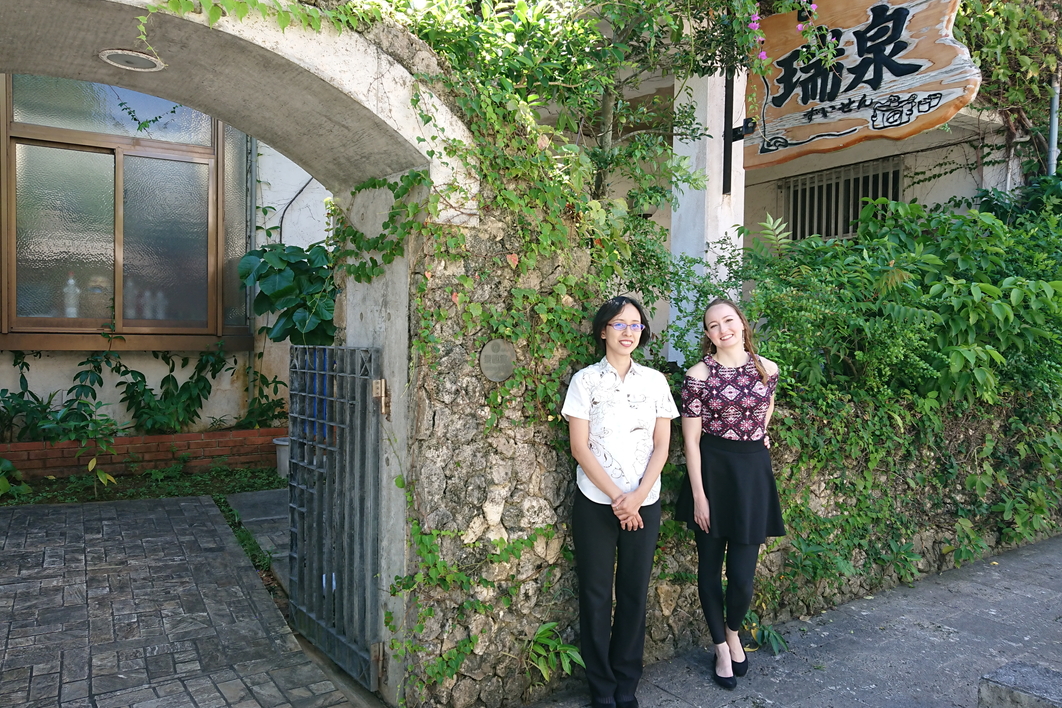 The Southeast Asian origins of awamori illustrates the nexus that Okinawa has been in Asia, this time with the strong influence of Siam (Thailand). Awamori is different from Japanese sake as it is distilled, not brewed, and due to the use of the indigenous black koji mold for fermentation. Additionally, according to one theory, since awamori was a valuable product controlled by the royal court in olden times, karate practitioners or karate-ka were employed to protect the transport of the alcoholic beverage from theft. Since there is no written record of this, some historians hold that the anecdote is apocryphal, but it does make for an interesting story! If it were true, most likely the guards would have been armed with weapons, but instead of guns, they probably made use of stick weapons, nunchucks, sais and other weaponry that were used in kobudo –a martial closely related to karate.

The distillery also showed me the storage house where giant clay pots contained aged awamori, which is not usually open to visitors. Just like how whisky is aged in oak tanks, awamori is aged to create a mature and refined drink. According to my guide, filled clay pots weigh some 300 kilograms a piece, and they are rare now since most distilleries use stainless steel containers. I would also like to note that traditional karate training in Okinawa utilizes similar-shaped clay pots or kami, albeit smaller and less heavy. Karate-ka grab the mouth of the kami with their hands to increase grip and arm strength. Now that it was past noon, it was time for lunch. Located near Ishimine Station was Udunyama, a Okinawa soba (noodle) house located in an imminently Instagrammable, traditional Okinawan-style house. I ordered the Udunyama Teishoku, a combination set that includes a bowl of Okinawa soba, Okinawan-style mixed rice (jushi), stewed pork (rafute), and two other side dishes. Situated on a hill in the Shuri district, the restaurant was relaxing with a pleasant breeze blowing through the lush trees, making it seem like I was dining in a small park or garden a world away from the hustle and bustle of a city. Indeed, this location was once used by Ryukyu Kingdom officials as a resting place. This folk house, which is over 150 years old, had on display valuable vases, awamori pots, and three-stringed instruments called sanshin, and I could feel the history of Okinawa. 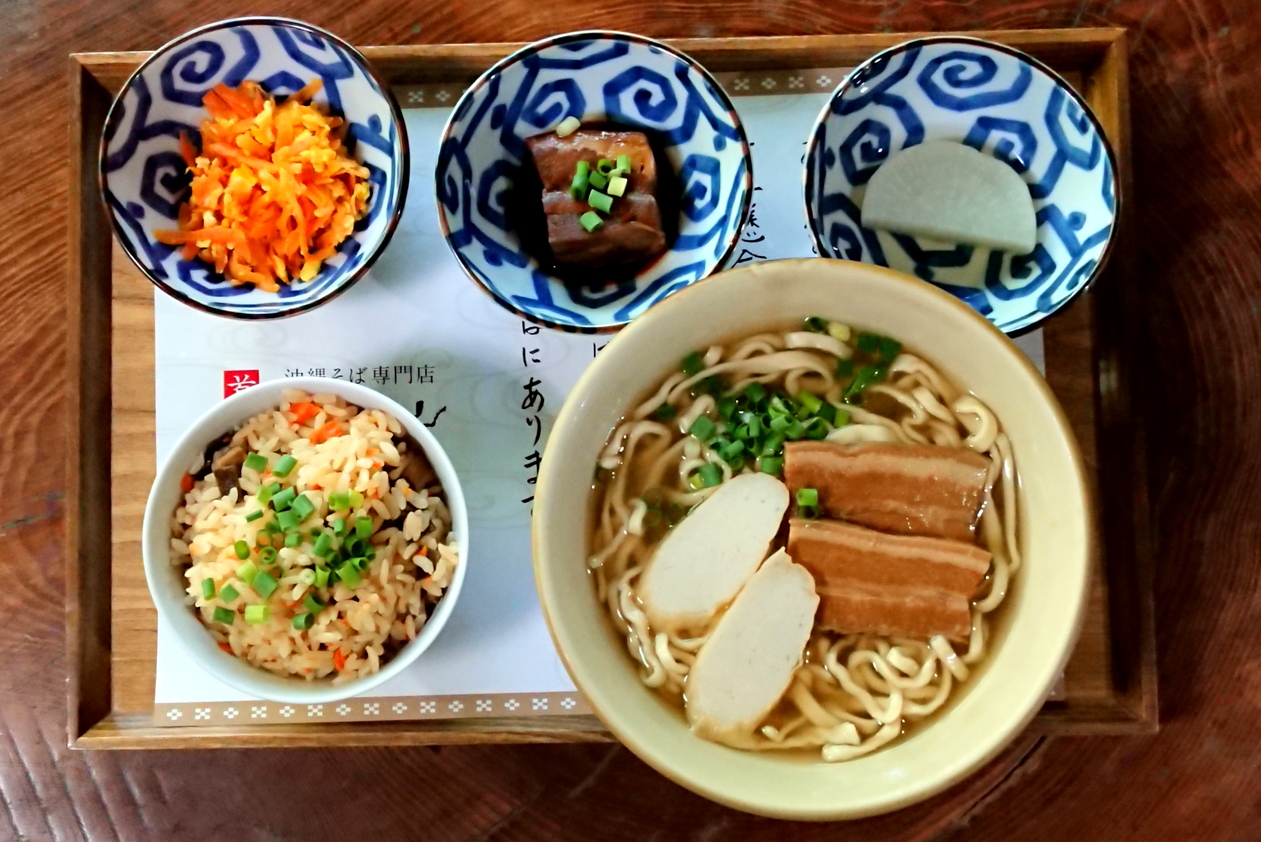 It turns out that Okinawa soba is different from Japanese soba in that the former uses regular wheat instead of buckwheat, and the clear broth uses plenty of bonito fish and seaweed as the stock. Another characteristic of Okinawan cuisine is that it is colorful, both the ingredients used to prepare the food and the various serving ware. It is indeed a feast for the eyes as well as the stomach, and just looking at the delicious food arranged before me brought a smile to my lips. 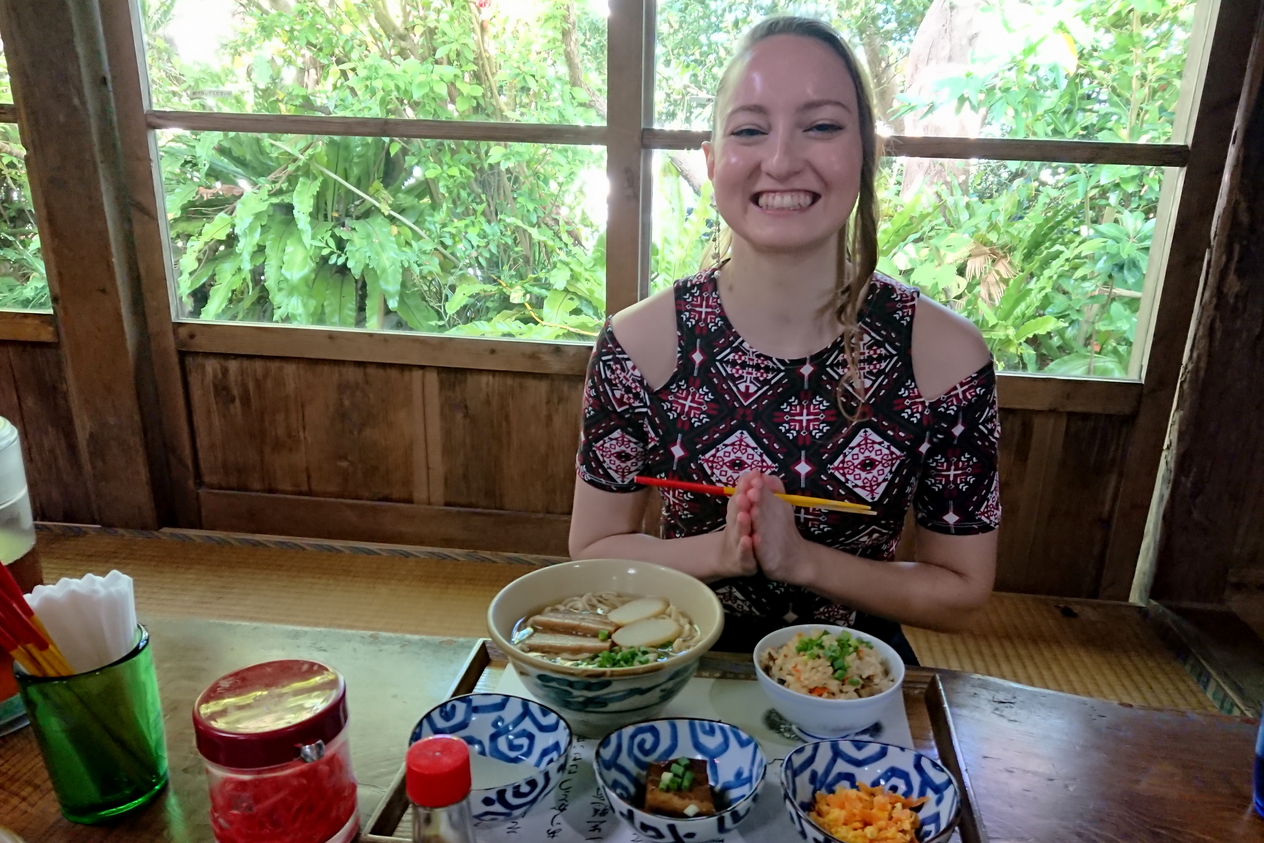 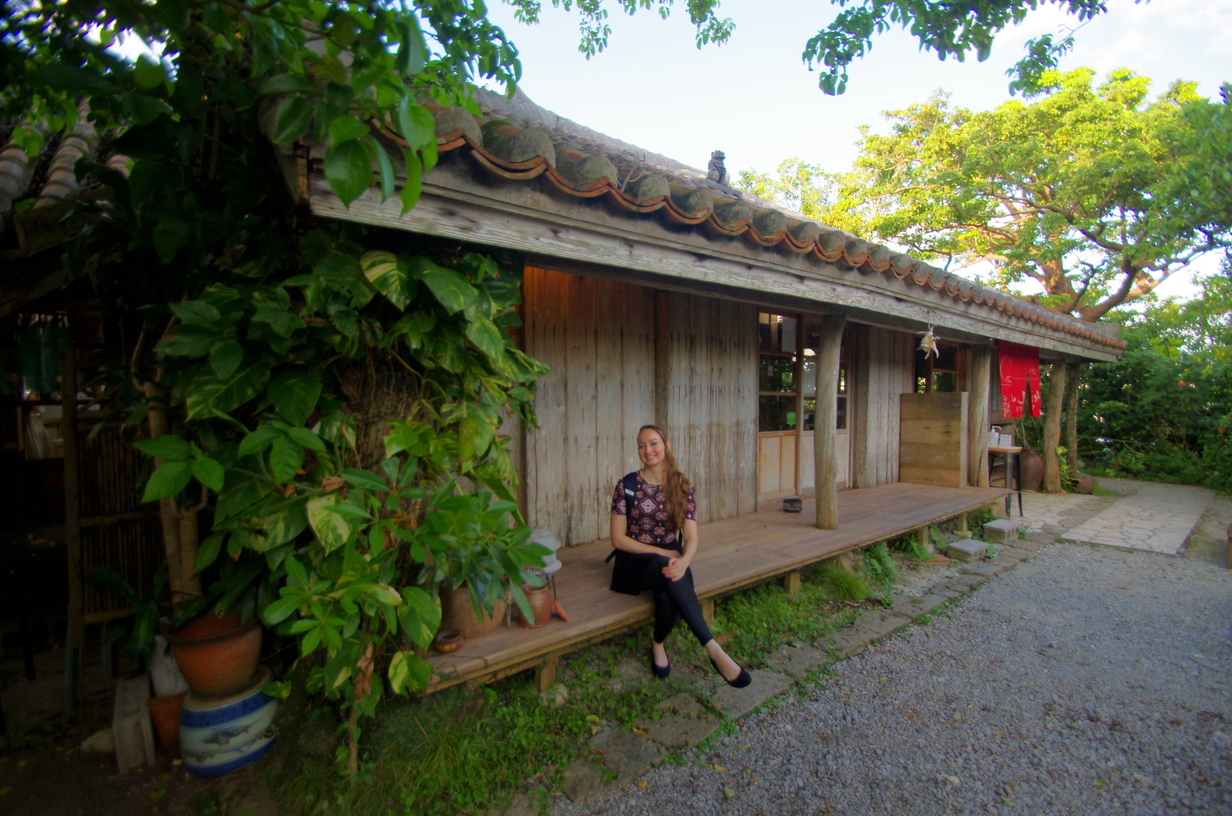 With lunch under my belt, and relaxing for some time in the beautiful yard, it was time for dessert. A 10-minute walk took me to Gibo Manju, a sweet bun shop that is popular with the locals. Each steamed bun is filled with a sweet, red bean paste and is painted with a large red Japanese character “no”. The buns are carefully wrapped in an intensely fragrant leaf from the shell ginger (getto) plant. I was taken aback by the large size of the bun, but the fragrant getto leaf and the still-warm buns stimulated my appetite. I thought they would make a perfect breakfast-to-go as well as a dessert or snack. At 160 yen a pop, it was definitely a deal. 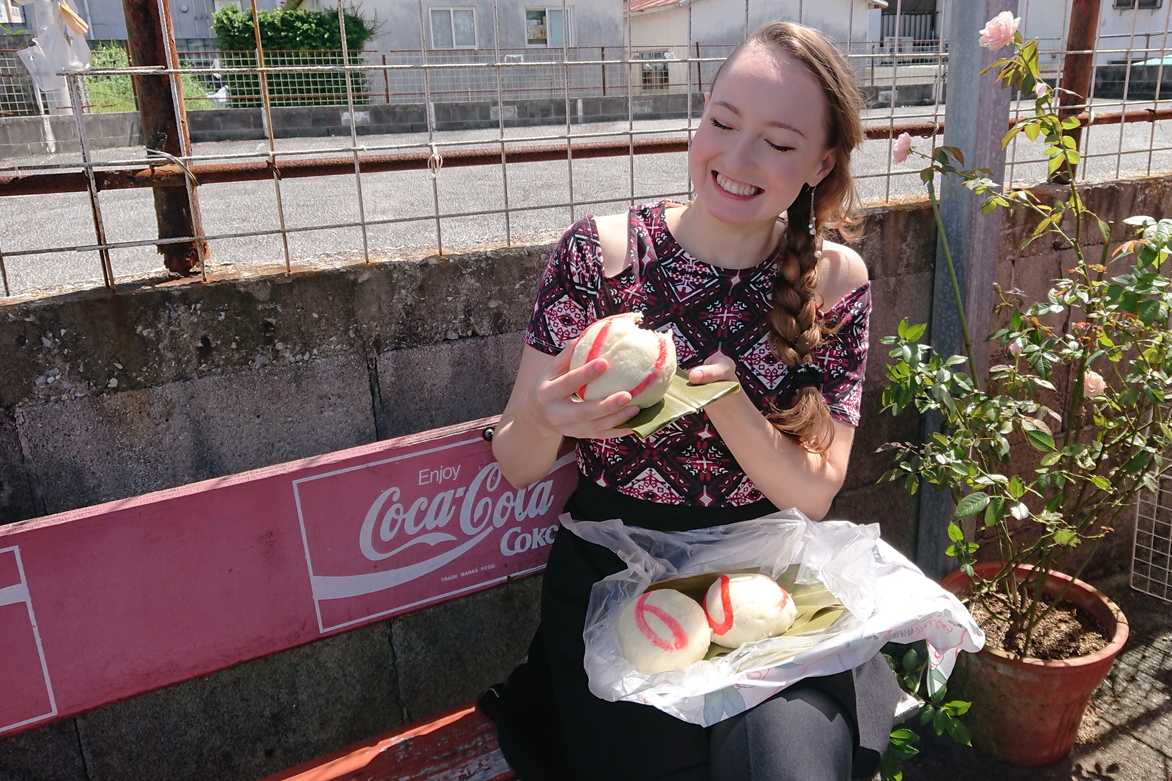 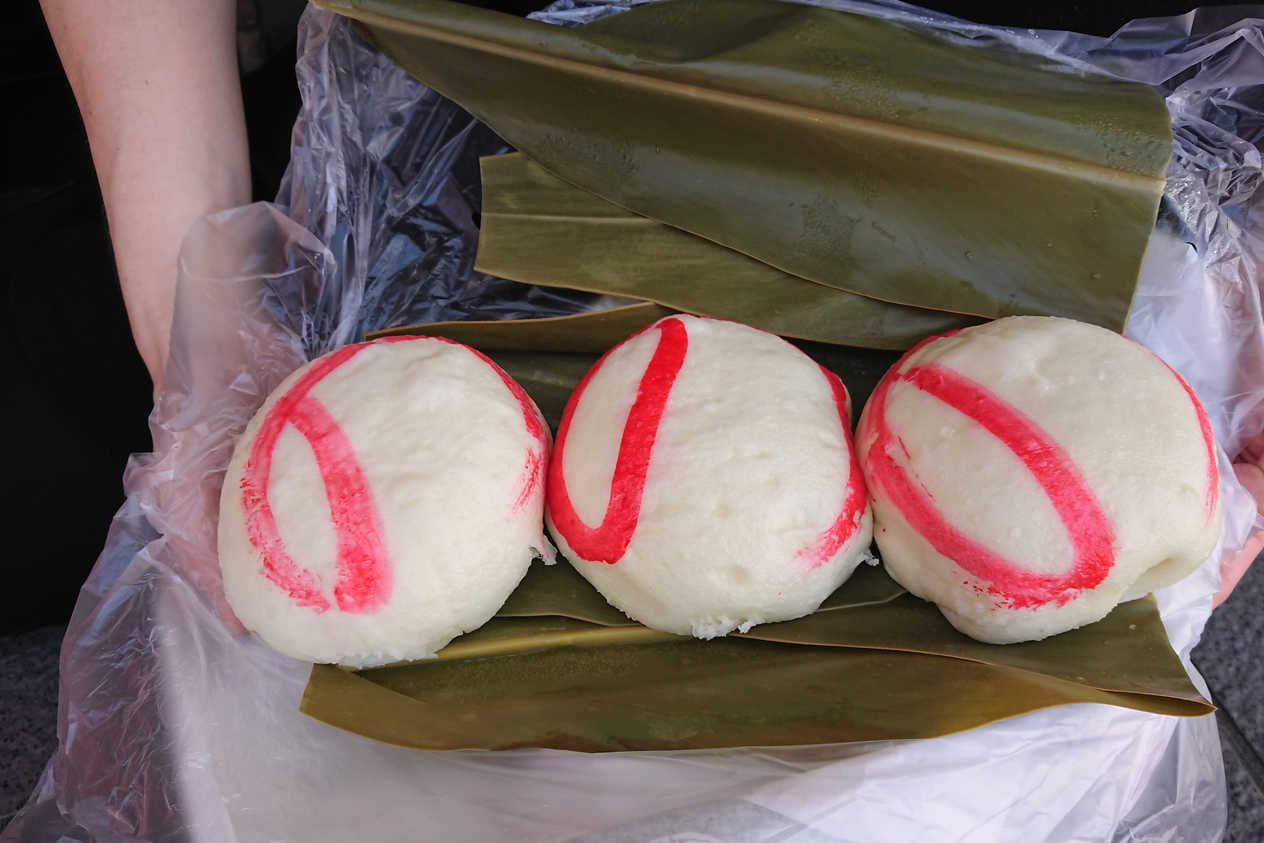 Bicycling Around Shuri and a Chance Lion Dance

After dessert, it was time to check-in to my hotel. I decided to go to the hotel while doing some sightseeing of the beautiful Shuri neighborhood using the bikeshare service Churachari. The area was hilly, but the e-bike provided a nice, motorized assist when going up the slopes. 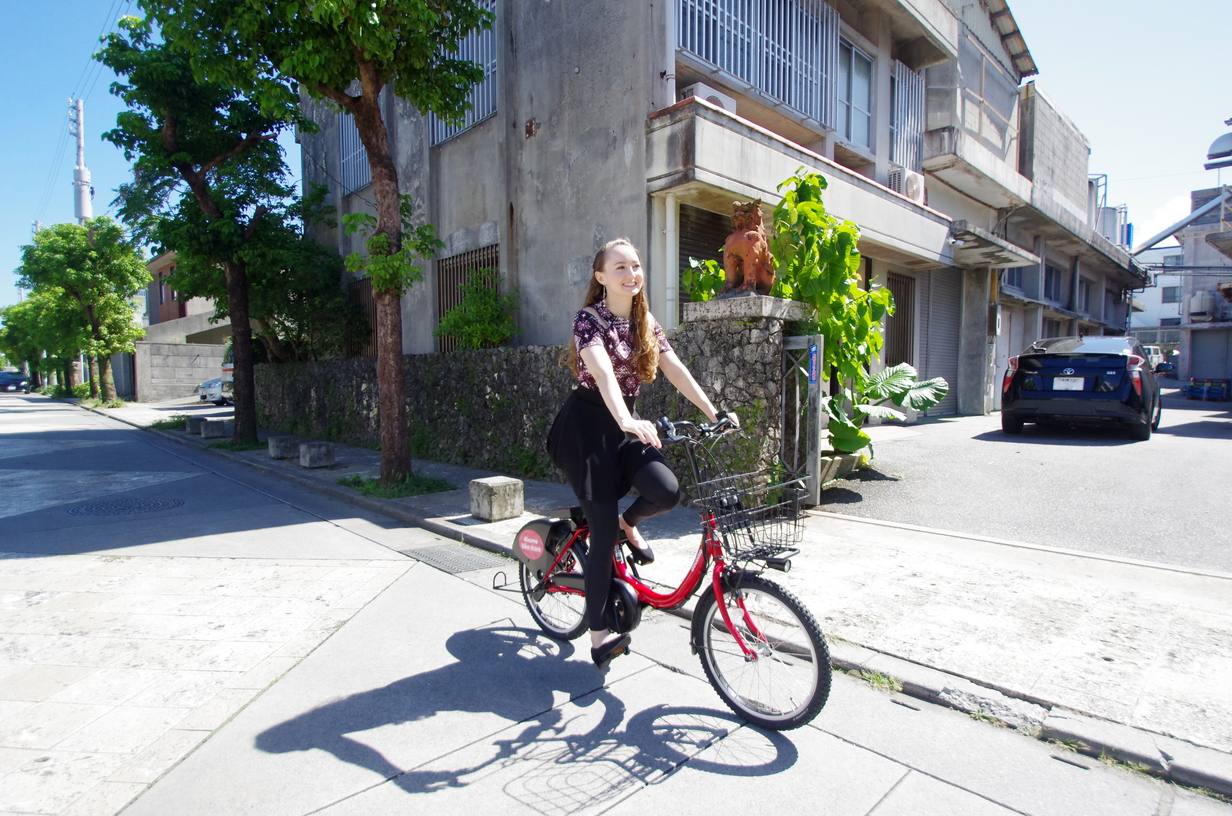 When I was passing near Shuri Station, I happened upon a lion dance festival. The lion dance of Okinawa is an integral part of the landscape of traditional events here since the lion dance is thought to ward off evil spirits and bring prosperity to local areas. I was happy to be able to experience traditional Okinawan culture in such an unexpected place. 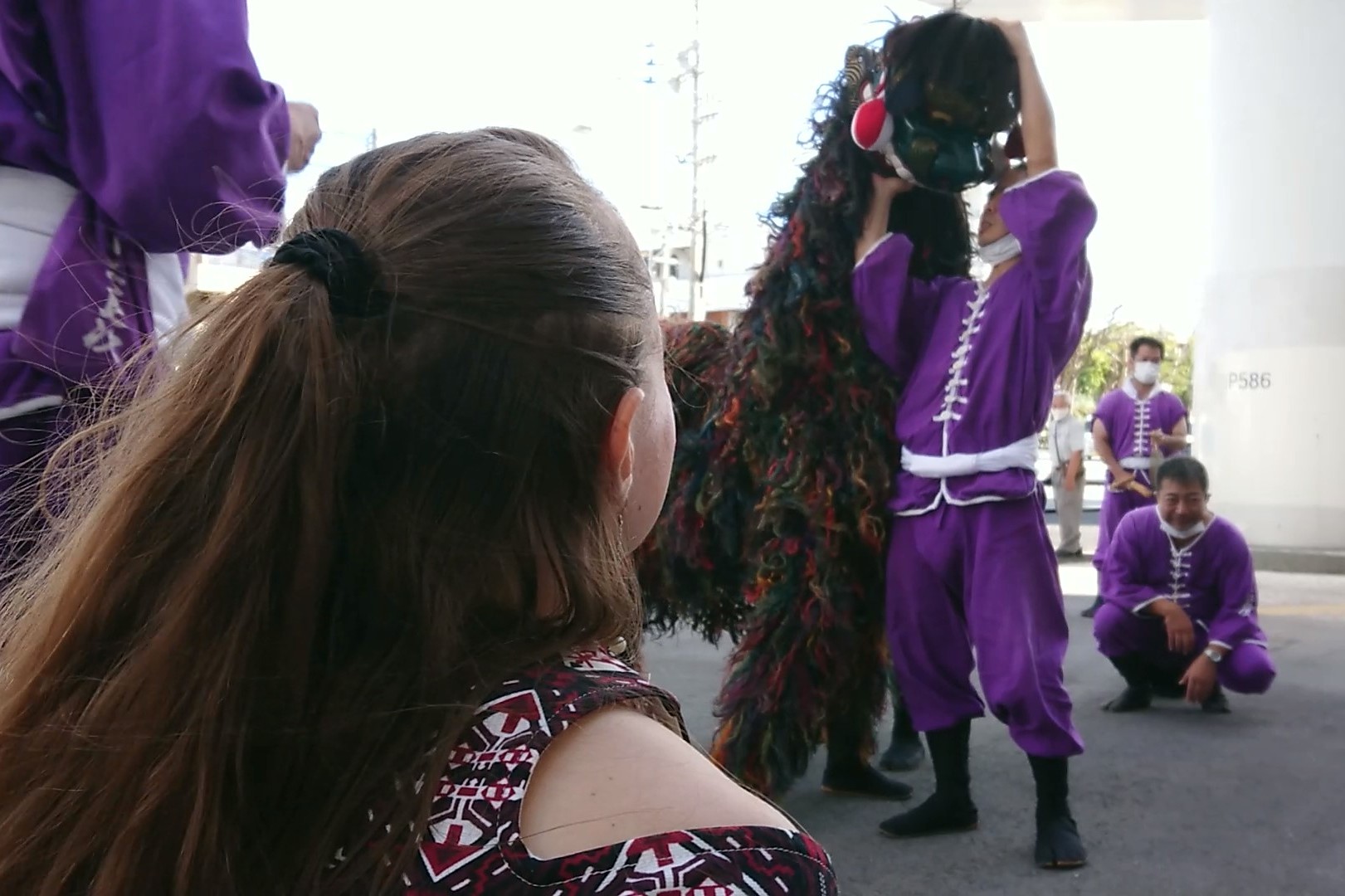 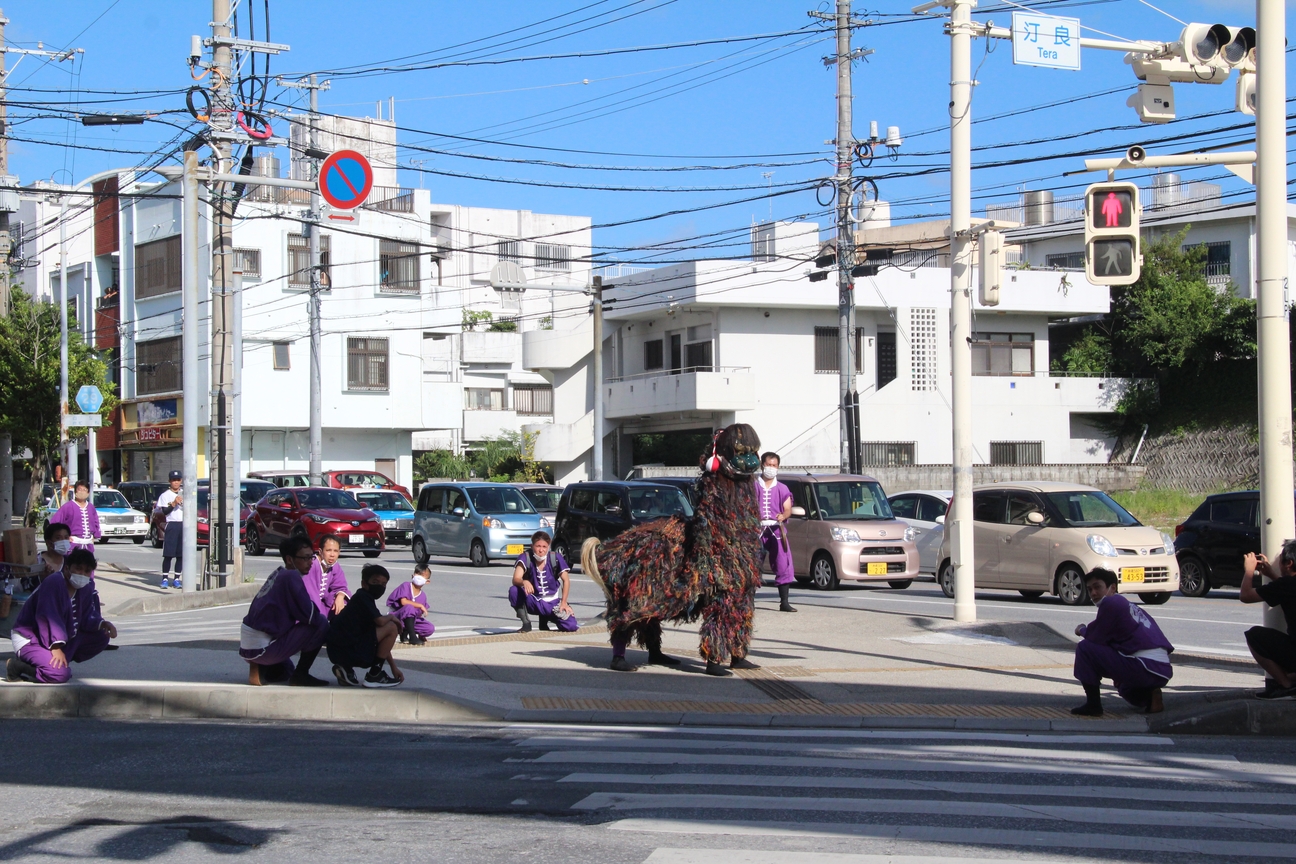 In less than twenty minutes, I arrived at my hotel, which conveniently has a bikeshare port for returning the Churachari bike. The accommodation that I chose, Novotel Okinawa Naha, features an attractive lounge on the top floor with a stunning view and an infinity pool that overlooks the beautiful cityscape from the hills of Shuri. At the cafe lounge Gourmet Bar on the first floor, there is a digital latte art machine that can turn a photo taken on the spot or your chosen image into latte art, and I ordered two “Karate Lattes” with my favorite karate images (1,019 yen, tax included). The foam art with “karate” written in Japanese kanji characters and another one with the image of a karate kata were so delicate that I was hesitant to drink them at first, so naturally I whipped out my phone to take a bunch of photos. I took a sip and it seemed like I was indeed drinking the “spirit of karate” in a cup. 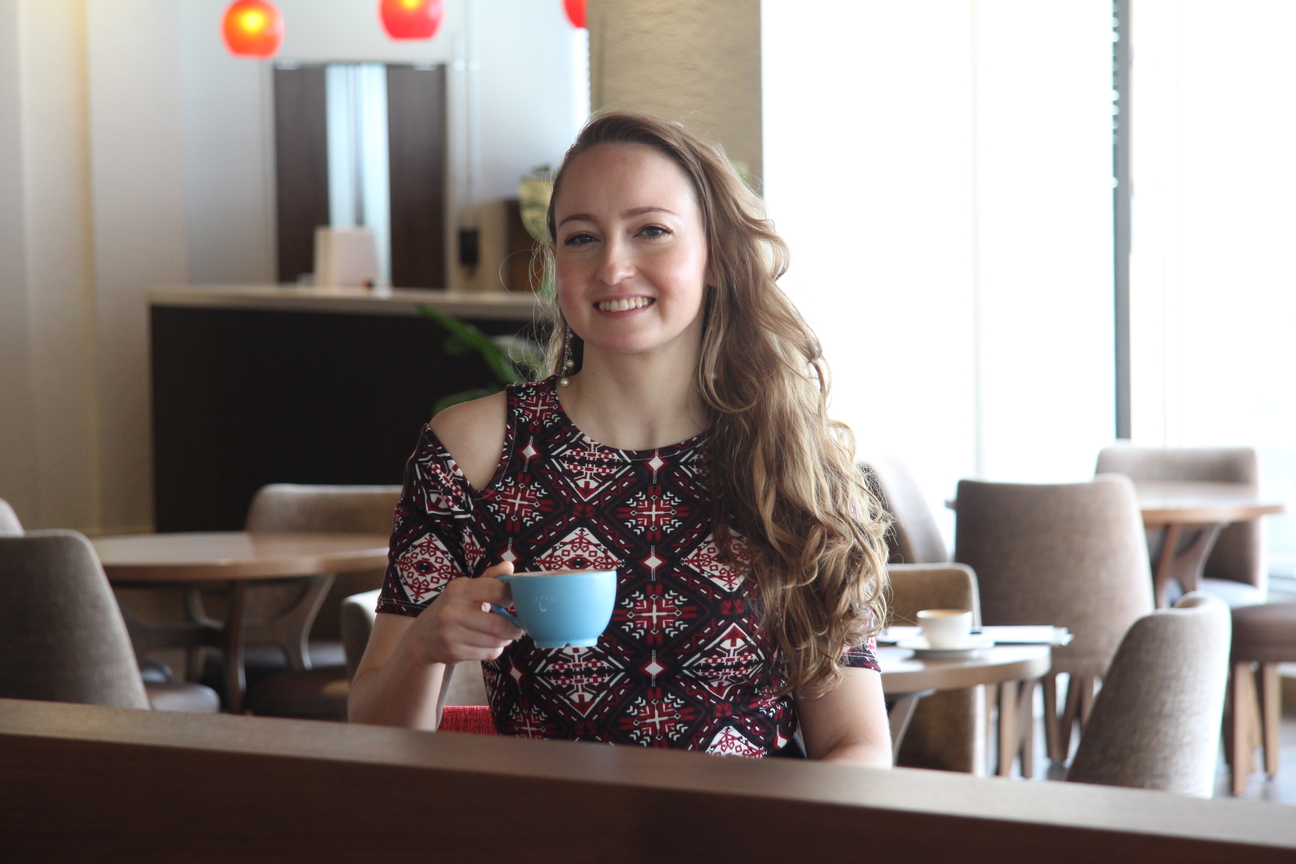 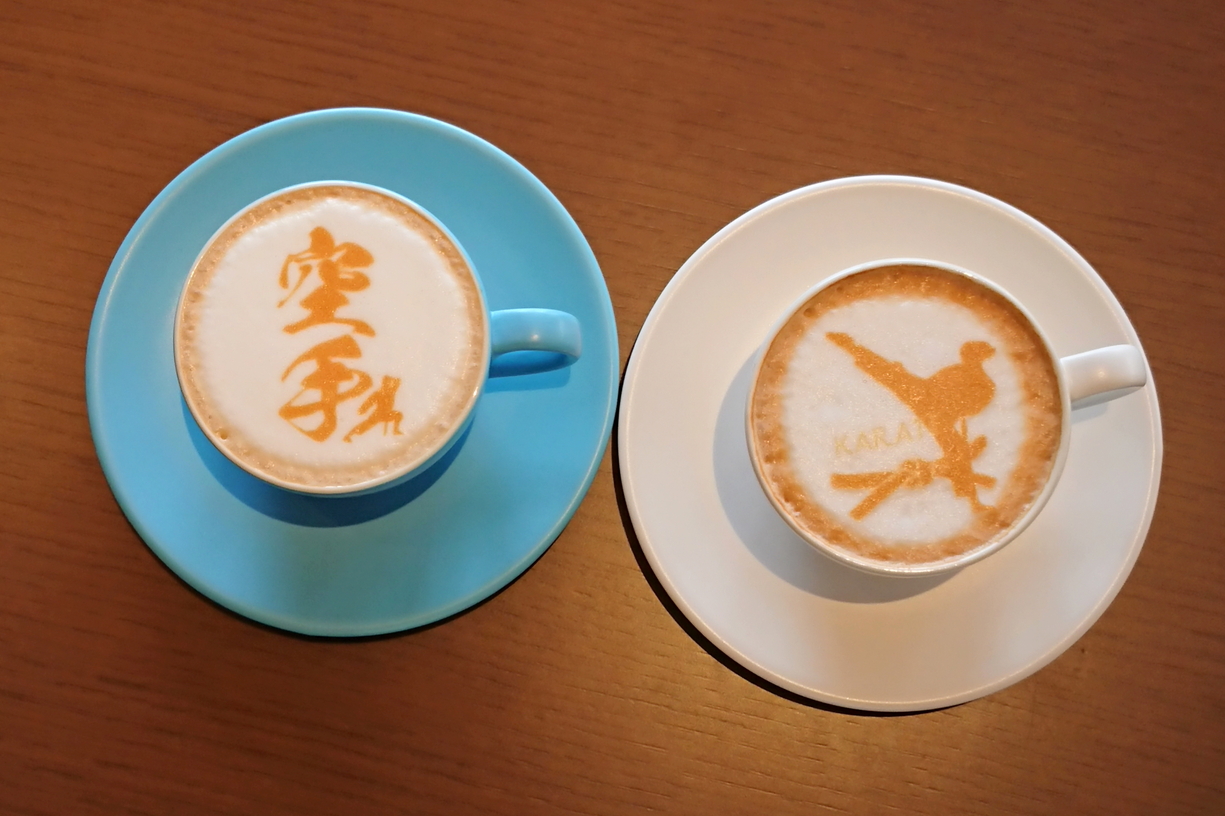 I decided to hop back on the share bike to head down to Kokusai Street (Kokusai-dori), the main drag of Naha and known as the “Miracle Mile” for its rapid development after WWII. 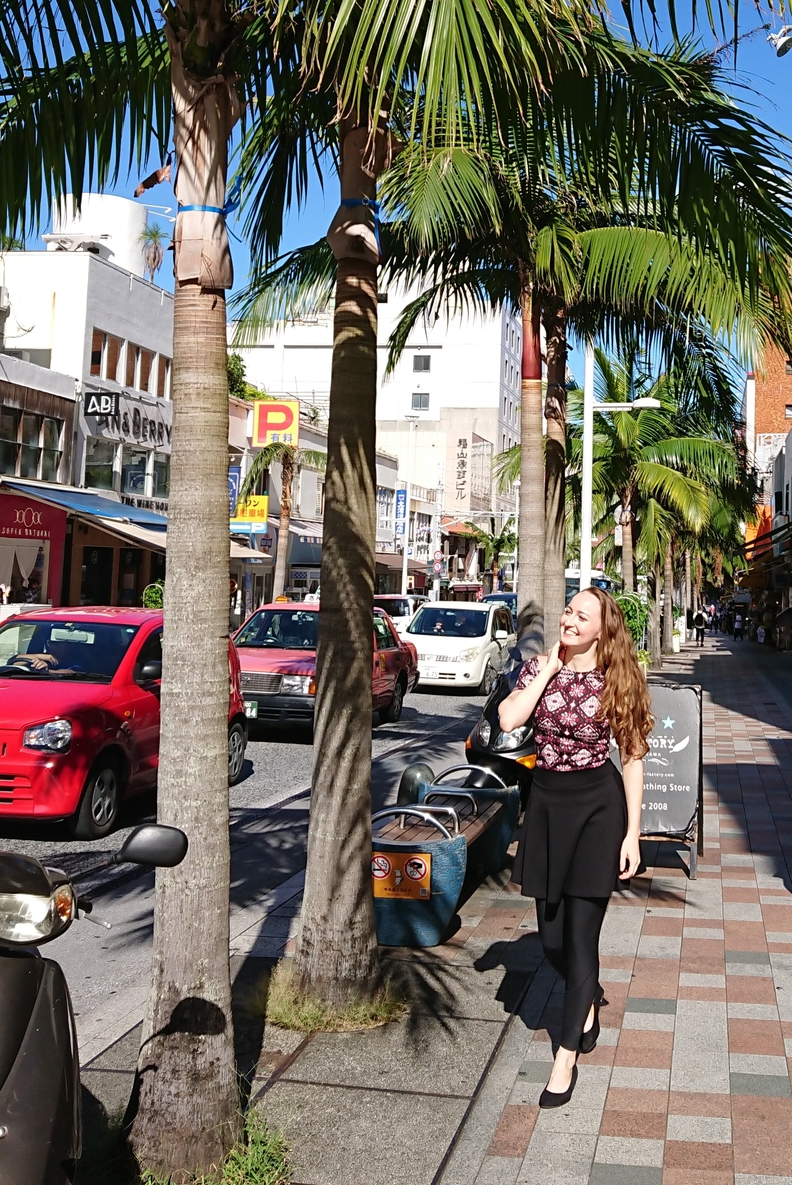 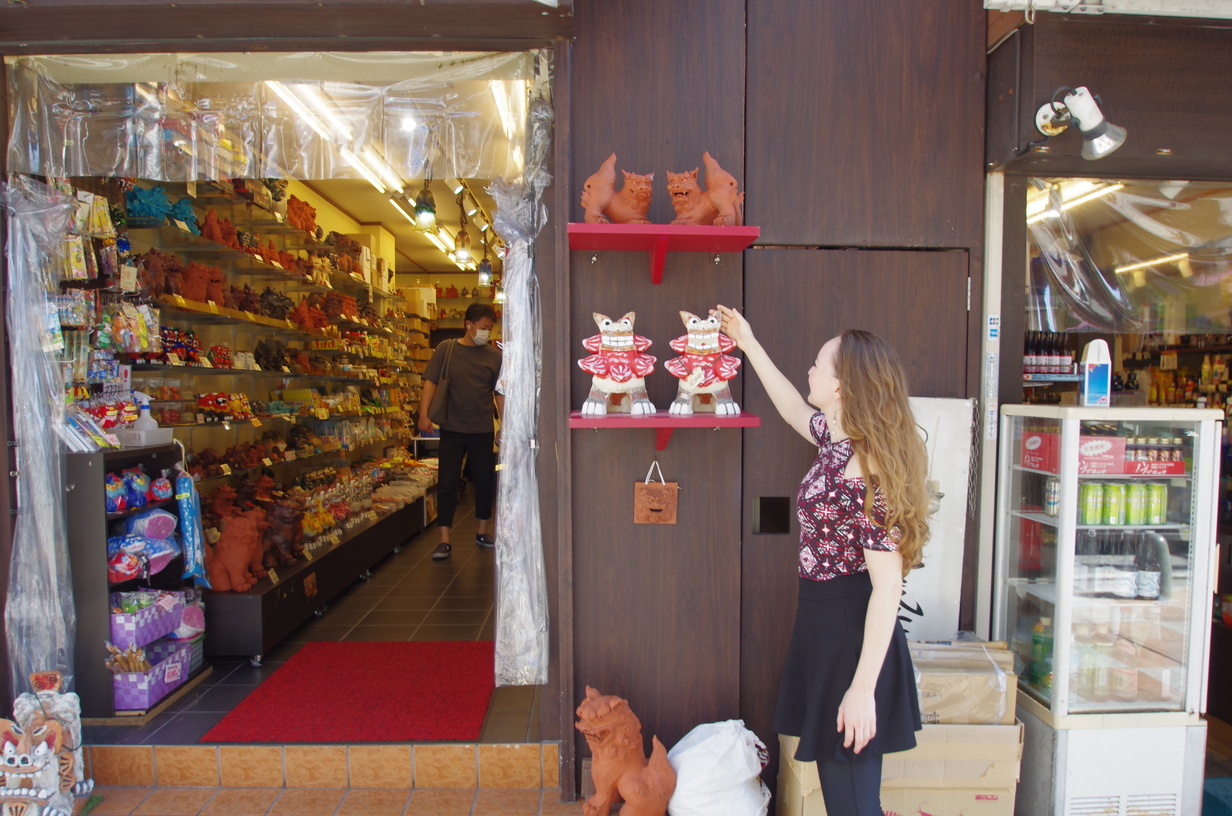 After strolling down the main street, I ventured down a side road, Heiwa Street, into a warren of alleyways chock full of souvenir shops, bars, eateries, and more. Almost at the end of the street where it forked off in two directions, there is a quaint towel shop selling karate-themed towels. The Ikehara Towel Shop is run by a friendly husband and wife team, and among the typical bathroom supplies, they also take orders for custom-designed towels. These karate towels should make a natural gift for karate enthusiasts. 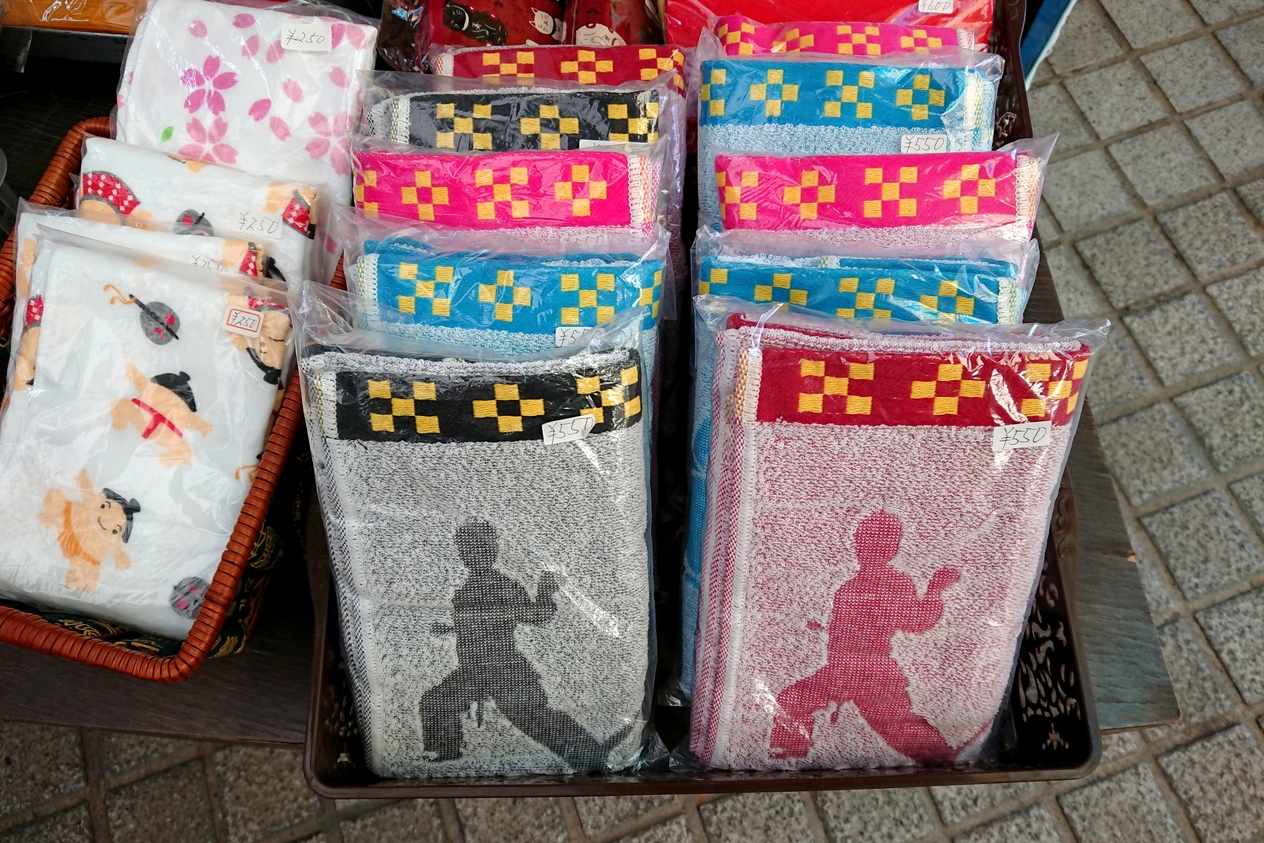 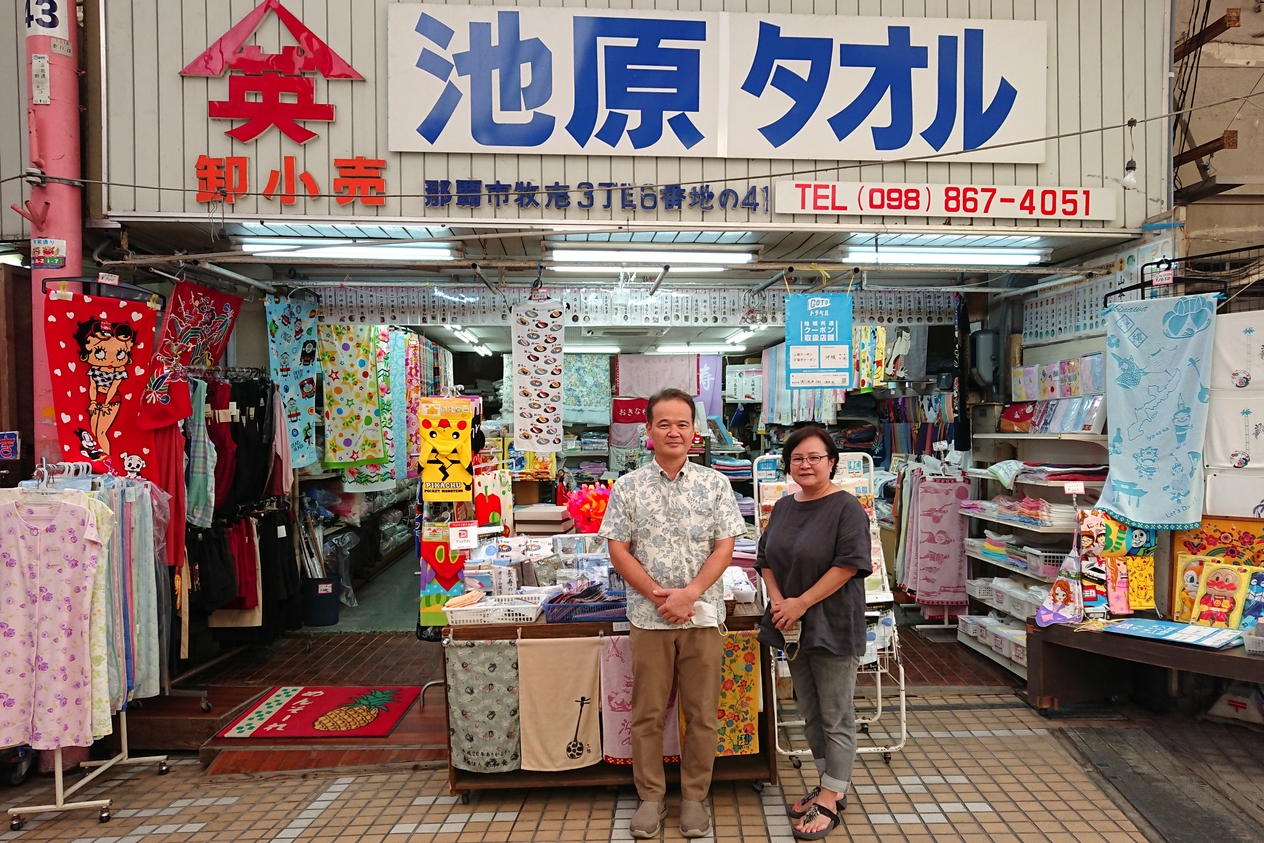 With the day rapidly winding down, my final stop took me to Naminoue Beach, about 10 minutes away by bicycle from the western end of Kokusai Street. The beach was the perfect place to relax after a day of urban adventure and watch the magnificent orange sky as the sun set across the horizon. For a karate enthusiast, the beach would probably recall an indelible scene from the movie, Karate Kid. I figured why not, and after a few attempts, I managed to get a few photos for my social media feeds. With so many fascinating places to offer the visitor, I felt like returning to Naha again, and maybe next time I will visit a karate dojo to sweat it out with a local sensei. 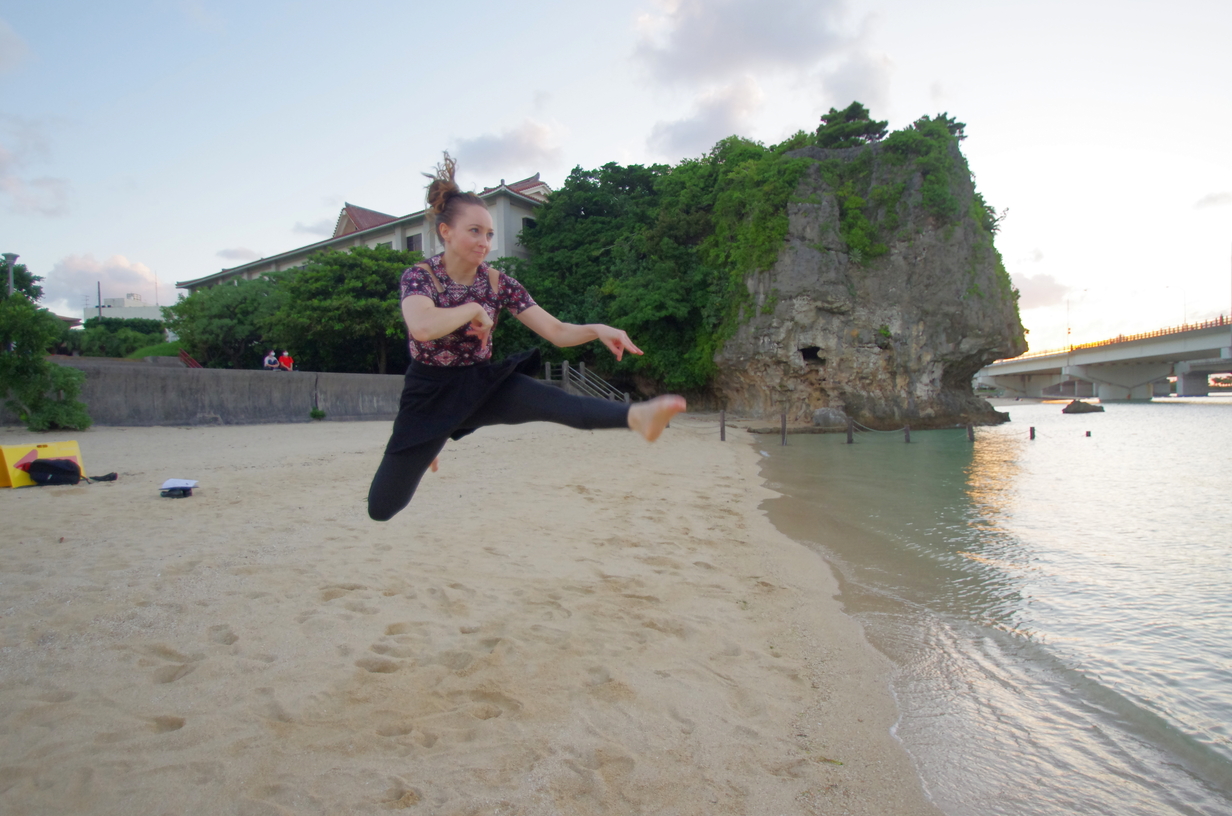 Posted on October 27th, 2020
Text by Nobu Taguchi
Nobu Taguchi is a Japanese American 20-year resident of Japan who has made Okinawa his home for the past year.

Gibo Manju *Only in Japanese

Ikehara Towel Shop *Only in Japanese

Karate – Okinawa’s Bridge to the World
My time in Naha had coincided with the Karate Day, and being a bit of a martial arts buff, I took the opportunity to see one of the most impressive displays of martial arts to be found anywhere on the planet. ...
Read More
3 Compact Theme Tours in Naha
The city of Naha is the bustling capital of Okinawa Prefecture, which in the Ryukyu Kingdom era was the main port and hub of foreign trade with South-East Asia, China, Japan, and Korea, and it has continued to flourish ever since....
Read More
Karate
Karate is a very popular form of martial arts along with judo and kendo, and Okinawa is said to be the place of its origin. ...
Read More