Presenting the Power of Okinawa “Power of Textiles”

> Categories > Tradition > Presenting the Power of Okinawa “Power of Textiles”

How did the unique view of the world shown in traditional Okinawan textiles come about?
Muneyoshi Yanagi, a researcher of folk arts with a deep understanding of Okinawa’s traditional culture, said “Wherever you go in Japan, there are few regions that can match the exceptional and diverse fabrics found in Okinawa. Fruit is not only used for the fabrics but also the dyes.” Bashofu is a beautiful type of cloth that originates from Okinawa. 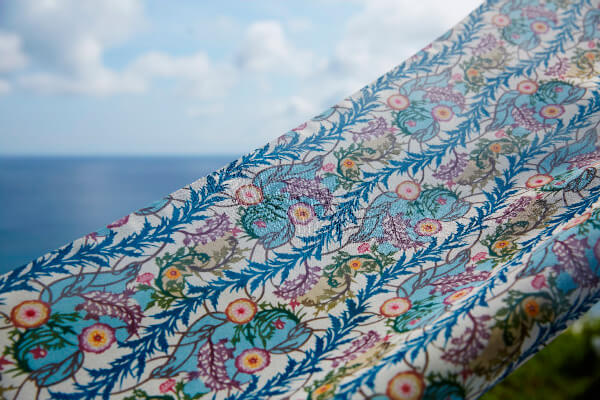 This red cloth that floats in the wind as if melting into the ocean is the work of Yusho Tamanaha, successor of Living National Treasure, Yuko Tamanaha. Dyed using traditional techniques known as “bingata”, this kimono cloth titled “Rose Vine Pattern” was exhibited at the Seibu Traditional Craft Exhibition.

The Story of the World’s Most Beautiful Fabric

Leaves of banana plants swaying in the wind, red-tiled roofs of wooden houses… This Ryukyuan scenery can be found all throughout Ogimi-son Kijoka, a small coastal village in the northern part of Okinawa’s main island where Bashofu, or Basho cloth, is produced. 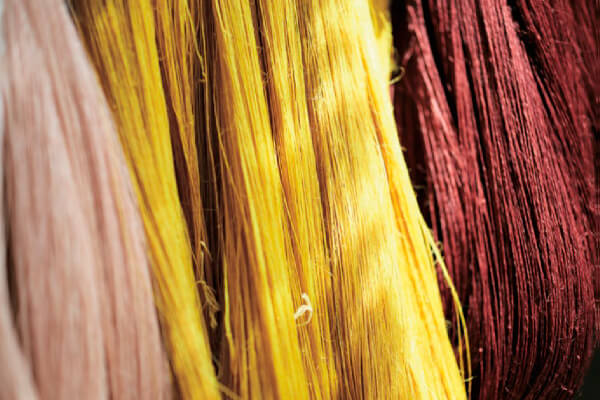 There are over 20 different steps from making the thread to weaving the cloth, starting with the cultivation of banana fibers (basho) which are the raw materials used to make the thread. Bashofu is the only fabric in Japan that continues to be made by hand, and no chemicals are used at any stage of the process, from the banana fields to the dyes. 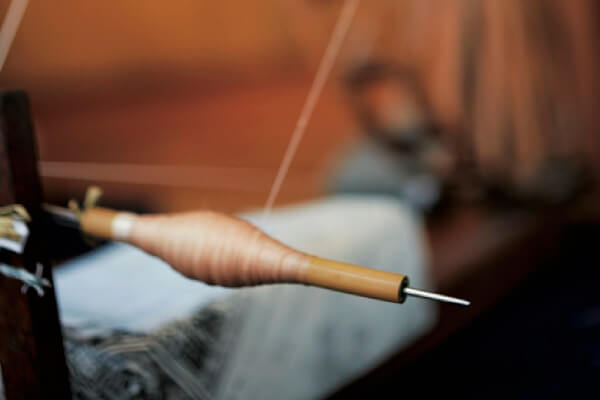 The thread is made by twisting the fibers, and only the arm of a craftsman can see whether or not they have been twisted in uniform.

“With a light and cool touch, Kijoka Bashofu is like a medicine to wear and can be worn with confidence.” says Mieko Taira. Toshiko Taira from Kijoka was the reason behind the revival of the art of Bashofu in post-war Japan. During the war, she had travelled to Kurashiki as a member of the volunteer corps, where she visited the Ohara spinning mill. Here she had the opportunity to meet Kichinosuke Tonomura, who was deeply involved in the folk arts movement, and learn textiles. This experience encouraged her to protect and nurture the growth of Okinawa’s textile industry, and she returned to Okinawa with this wish.

An obi made of Bashofu with a flower pattern. This classic pattern feels contemporary with its simple design.

Unfortunately the fields of banana plants, whose banana fibers are the raw materials for making Bashofu, were attracting mosquitoes and so had been cut down. Amidst these hardships, the women of Kijoka continued to work painstakingly hard so to continue the production of banana fibers and to not lose mastery of the skills necessary to create Bashofu, restoring the art of Bashofu. In 1974, the “Yoshika Bashofu Preservation Society” was designated as an Important Intangible Cultural Property, while Ms. Toshiko Taira also received recognition as a Living National Treasure. New possibilities for Bashofu have been pursued by using plant dye along with designs from the Ryukyu Dynasty and elements of dyed weave. 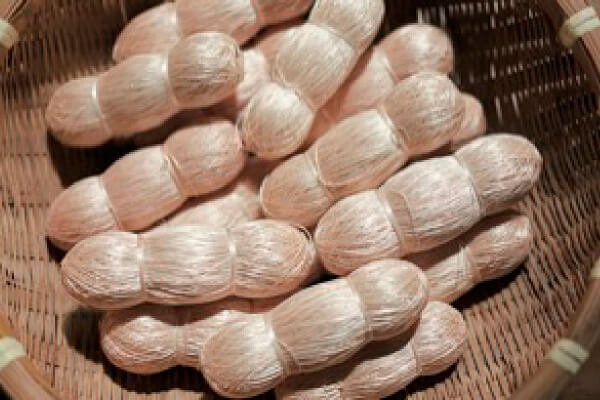 “The hardest and most important job is the farming.” According to Mieko Taira, the wife of Toshiko’s eldest son and Toshiko’s successor. 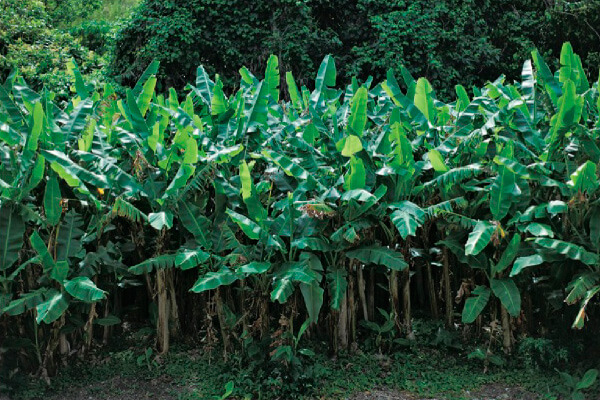 For a well-maintained banana field of 750 tsubo, or just under 2500 m², it takes approximately 3 years for the banana fibers to grow.

3 or 4 times a year, the leaves are cut off to help soften the fibre and the trunk trimmed to ensure it grows at an equal thickness. The banana fibers of approximately 200 trees are needed to weave the cloth for one kimono made of Bashofu. In a field that covers 2500 tsubo (over 8,000 m²) maintenance jobs such as weeding and cutting the leaves and trunks are essential for producing high quality threads, and harvests take place throughout autumn and winter when the trees are ripe. The new buds that grow from the cuts on the side of the trunk are said to be precious, and it can take 2-3 years before fibers are ready to be taken. 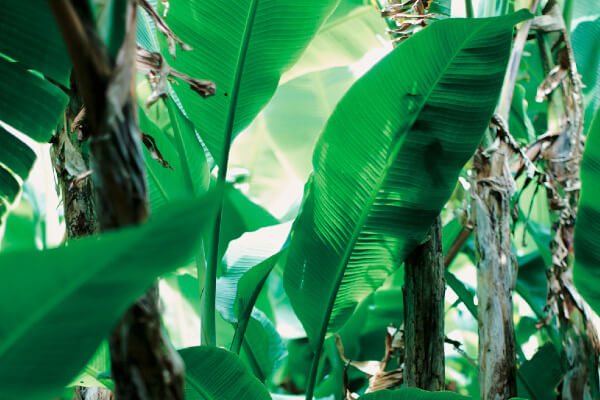 Ripe banana plants are harvested throughout autumn and winter when the skin is peeled off before being bundled and cooked with charcoal. It is then scrubbed of impurities and turned into fine fibers which are made into thread using various processes such as twisting and scraping. Once it has been died using natural plant dye, it is weaved to make Bashofu. As the stalk of the banana plant multiplies, the fibers further in the middle create a softer and more delicate thread. Because of this, the thread has been grouped into four categories, starting from the outside with accessories, and moving inwards for belts, kimonos and dyeing. 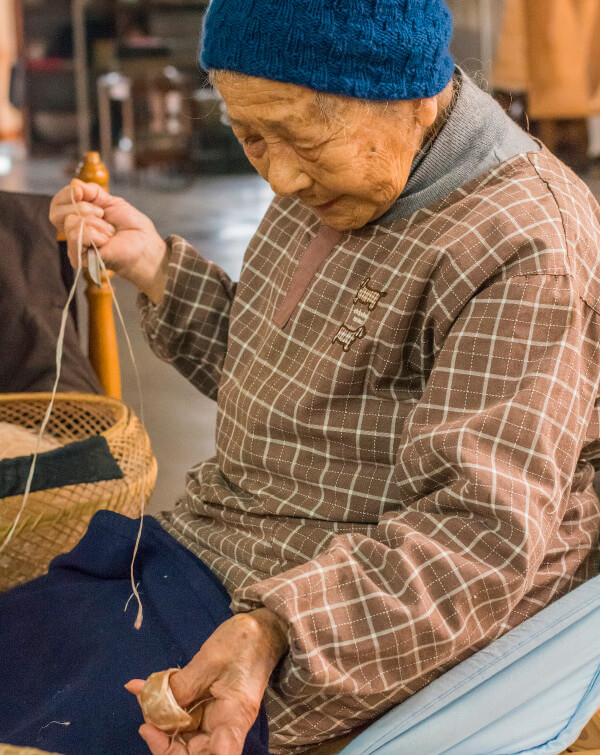 Toshiko Taira continued to struggle hard after the war to continue the art of an unchanged fabric, remaining the same now as in the past. Although those who surpass the age of 90 do not generally weave the machines, they continue to provide guidance for the ladies working at the Bashofu Kaikan and prepare the threads. As Ms. Taira desired, the skills have been passed on to the next generation who continue to spin the beautiful story of Bashofu.

What is “INTOJAPAN”?
INTOJAPAN is a web magazine created by Shogakukan’s “Waraku Magazine” editorial department, which provides a gateway into Japanese culture and delivers the charms of real Japan.