When speaking of the ocean surrounding Okinawa Main Island, many people might think of the West Coast area where resort hotels are concentrated. However, there are many attractions on the East Coast area as well. So, let’s have fun there!
Explore the charms of the deep East Coast area by driving to four islands on the Kaichu-doro (the Road Through the Sea).

When speaking of the ocean surrounding Okinawa Main Island, many people might think of the West Coast area where resort hotels are concentrated. However, there are also many attractions in the East Coast area. So, let’s have fun there!
Explore the charms of the deep East Coast area by driving to four islands on the Kaichu-doro (the Road Through the Sea).
Starting from Payao, you visit the fresh seafood retail shops along the seaside of Awase in Okinawa City.
After finishing a meal, head to Kaichu-doro, Uruma City which takes about 15 minutes by car from Okinawa City.
Following the Kaichu-doro, there are four islands: Henza Island, Hamahiga Island, Miyagi Island and Ikei Island.
Each Island offers its own attractions such as shopping, snacks, pilgrimage, a tour of a salt factory, as well as opportunities for playing at the beach. 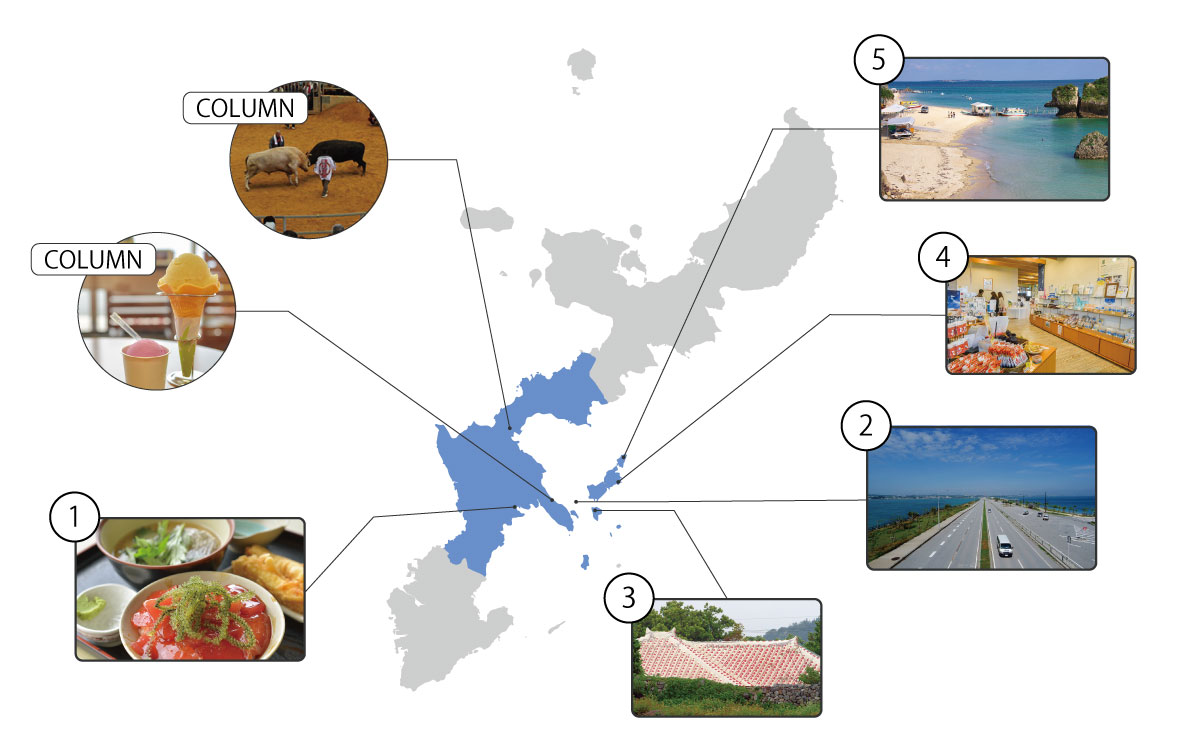 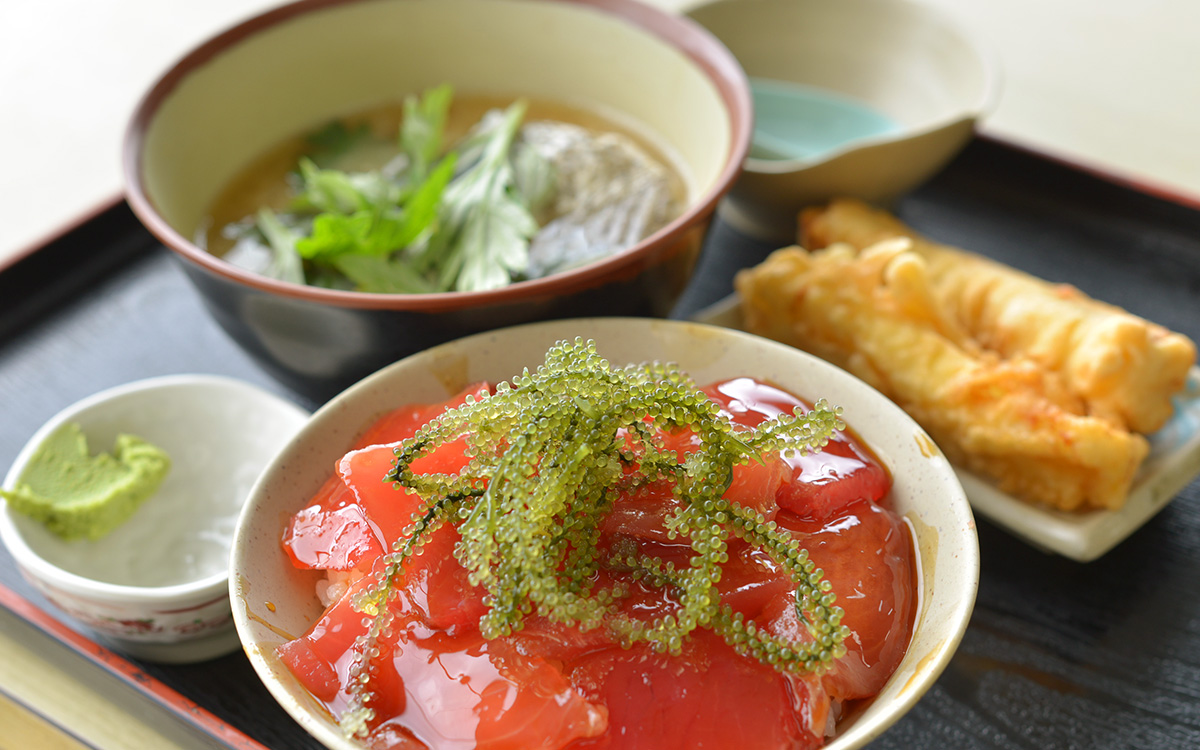 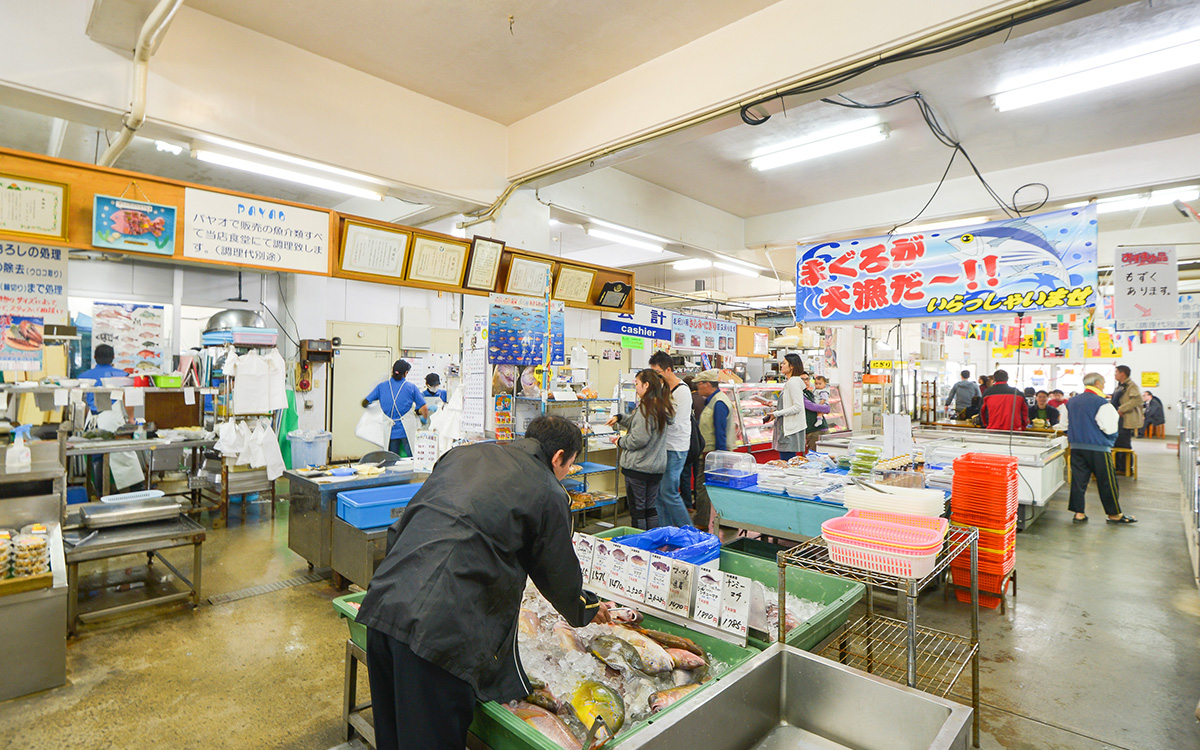 “Payao” means a man-made fishing reef. You can catch the various fish from the surrounding seas around payao, or buy fish directly at the shop. The freshly-caught tuna is highly recommended.
A restaurant which is located within the shop offers fresh seafood dishes such as grilled Japanese spiny lobster with sea urchin as a set meal, as well as a tuna rice bowl with plenty of tuna.

2. Kaichu-Doro (the Road Through the Sea). 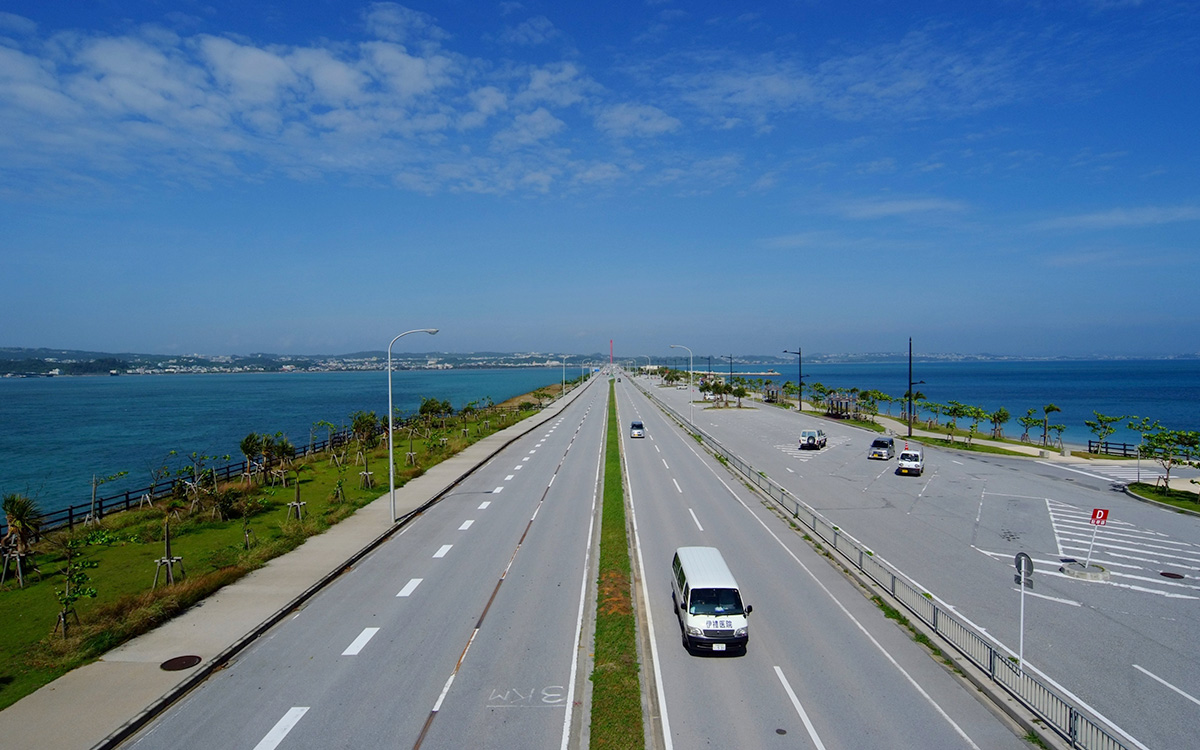 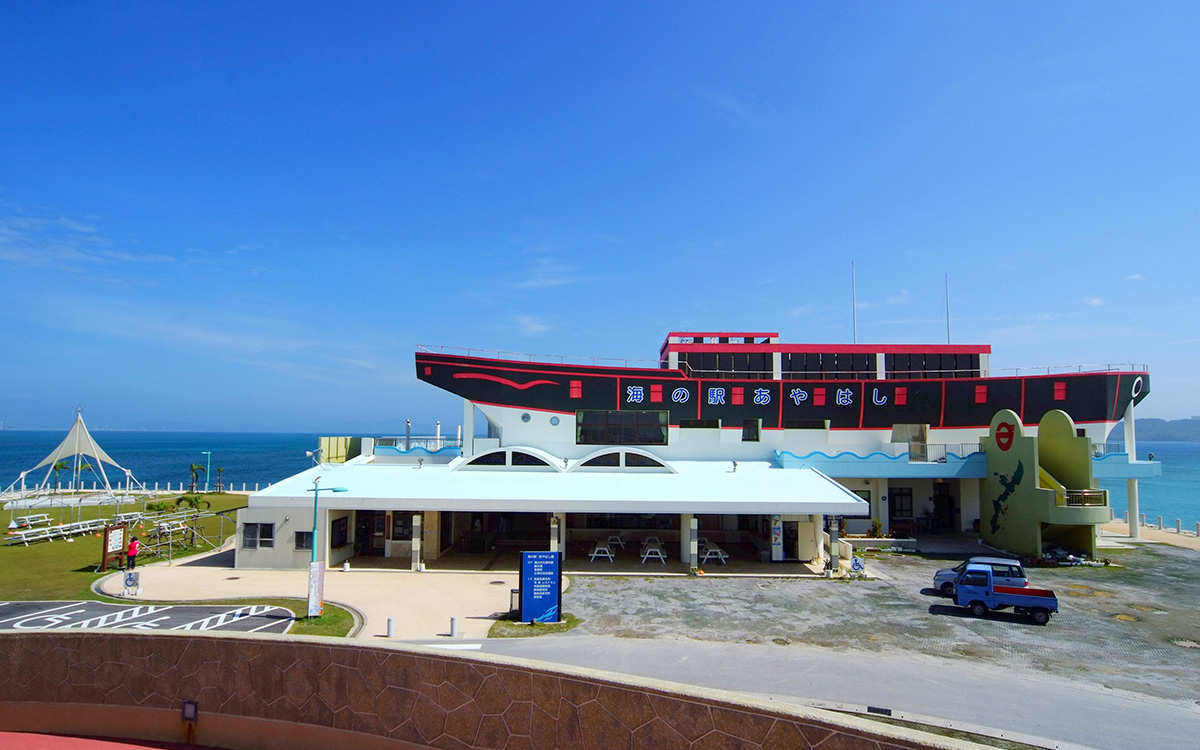 This is the 4.7-kilometre-long road built over a beautiful ocean is known as the Road Through the Sea. It connects the Yokatsu Peninsula to Henza Island, and you can enjoy driving by looking at the ocean scenery as you make your way from to the islands beyond.
On windy days be sure to look out for the wind surfers riding waves here.
At Umi no Eki Ayahashi Hall in the middle of the road, a range of local products are available. A restaurant and an ocean cultural museum are located here as well.
Low tide significantly pushes back the tide into the ocean, therefore, visiting at high tide is recommended. 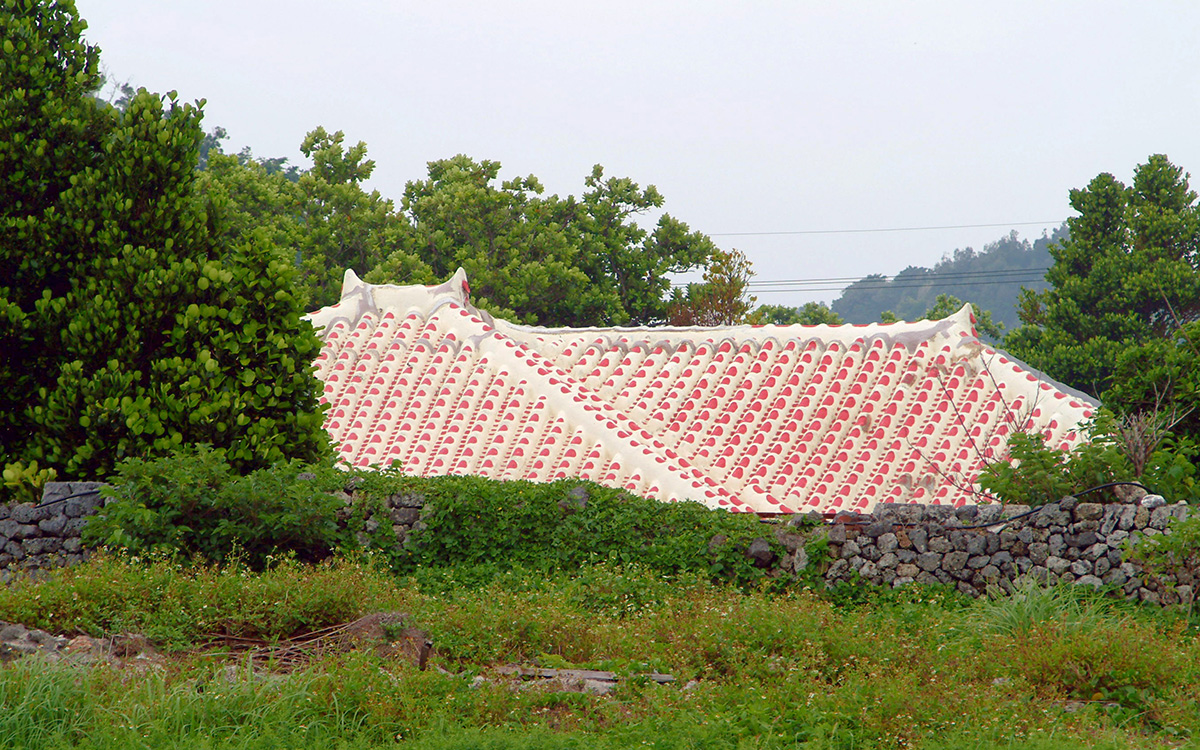 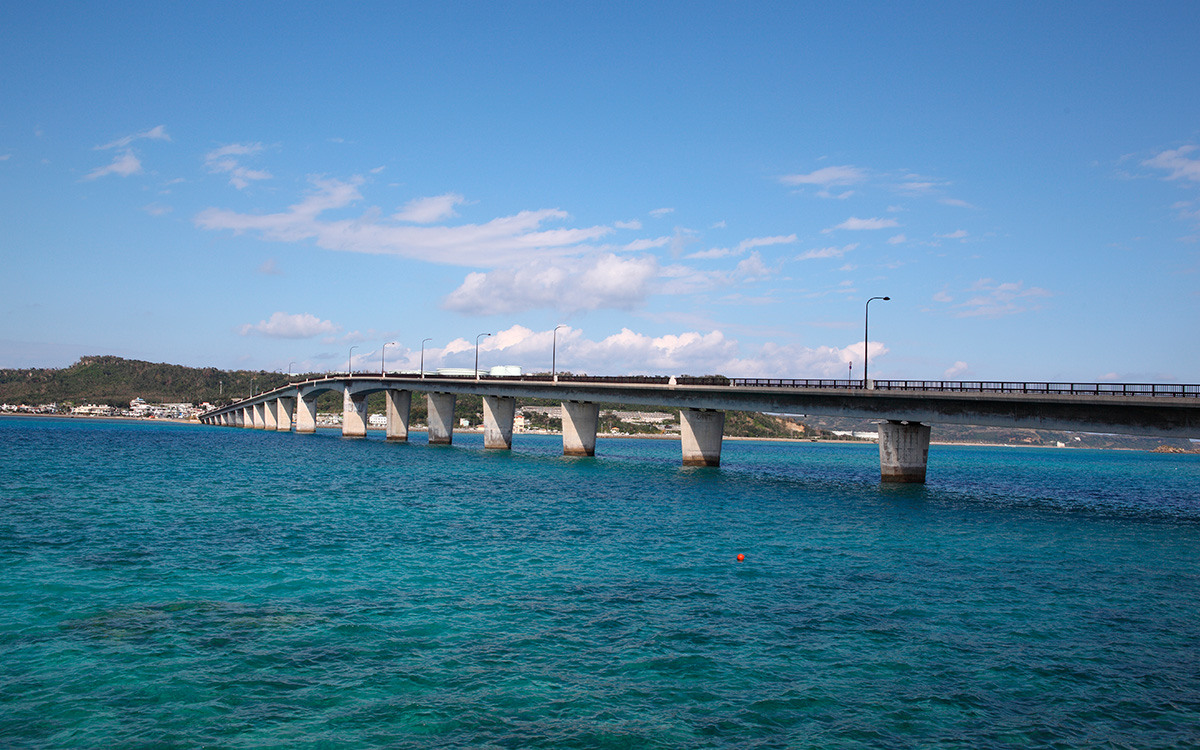 Ryukyu Kaibyaku, the Okinawan legend of the Goddess and God named Amamikiyo and Shinerikiyo, can still be felt on this mysterious island.
There are historical spots here, including the grave of Amamichu (Amamikiyo) which enshrine both God / Goddess, and the Shirumichu Cave where it is believed they lived.
In the Shirumichu Cave, there is a woman-shaped stalactite which is reputed to be a miraculous stone for those wanting to be blessed with children. 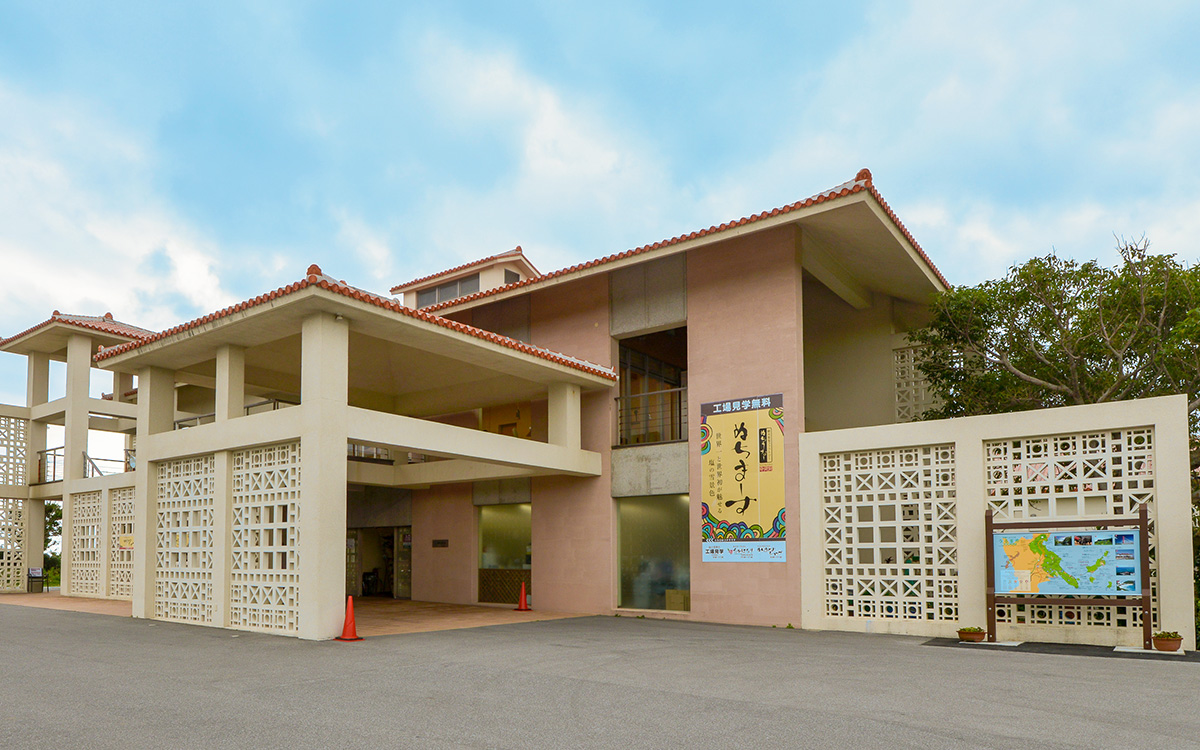 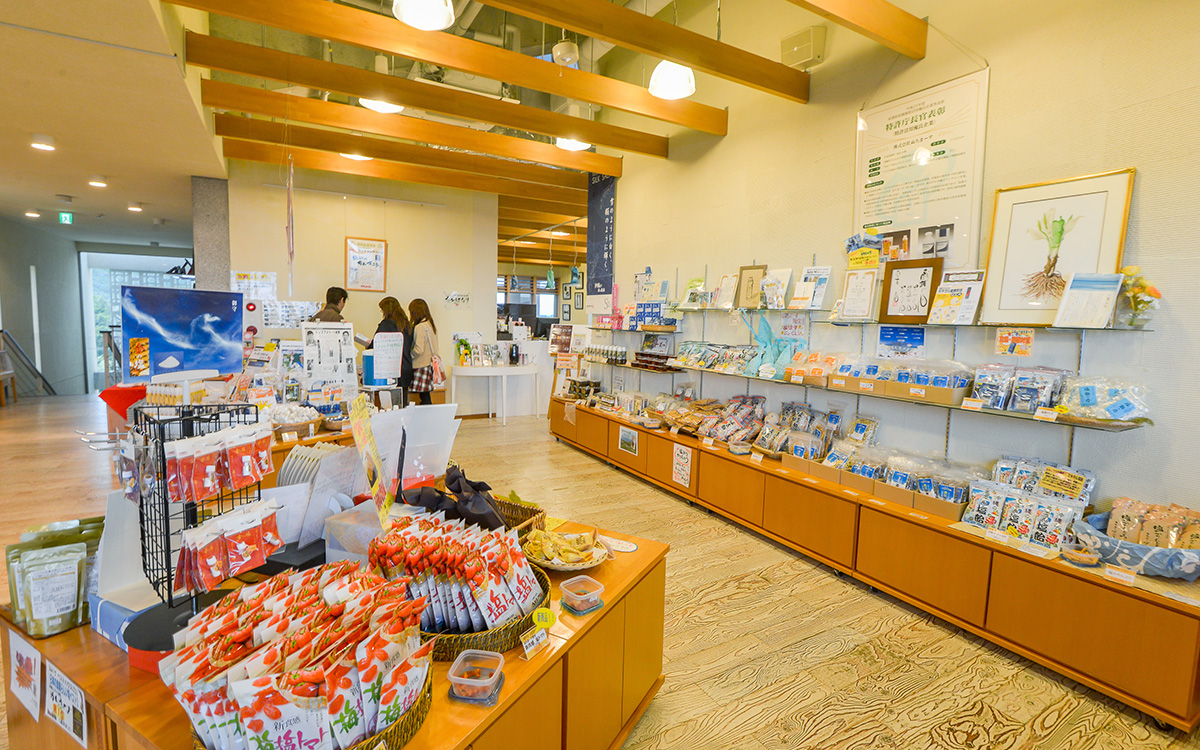 Miyagi Island lies between Ikei Island and Henza Island.
Nuchi Una is a factory that produces salt. The produced natural sea salt called Nuchi Masu is renowned for containing a rich blend of minerals.
At the factory, visitors can take a tour to learn about salt production. Salt-related products including seasoning, confections and cosmetics are available at a shop, and dishes cooked with high-quality local ingredients are served at a restaurant. 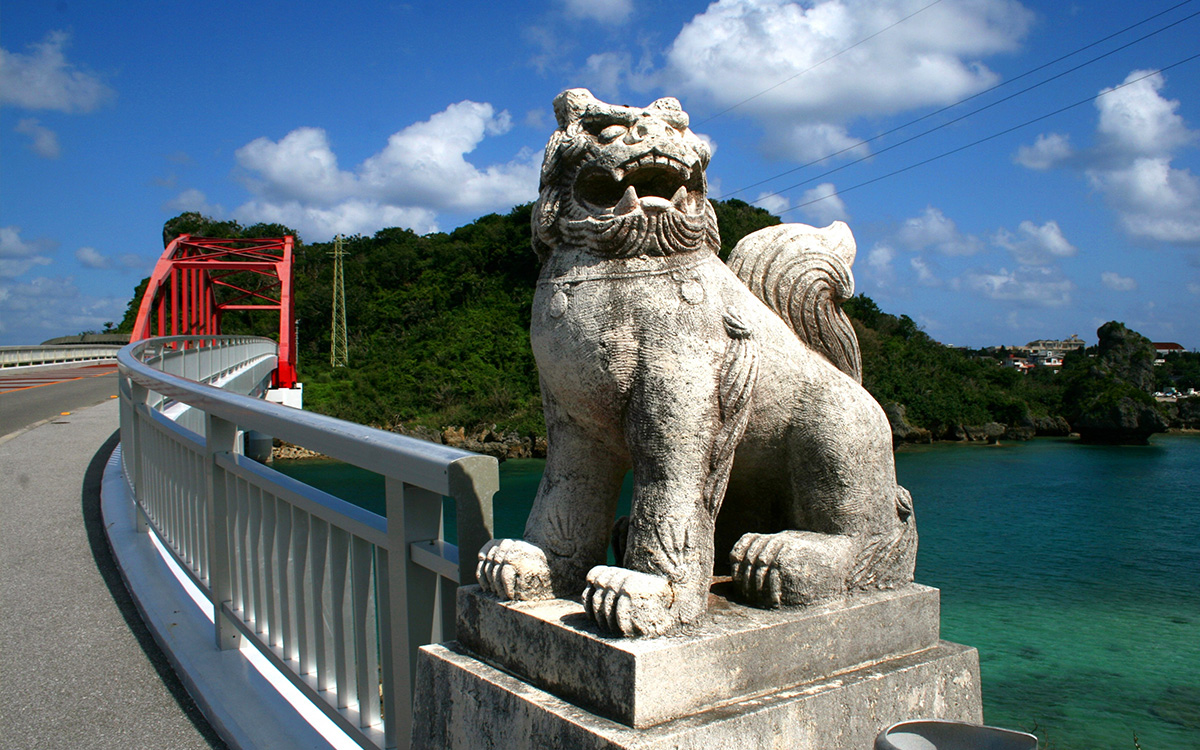 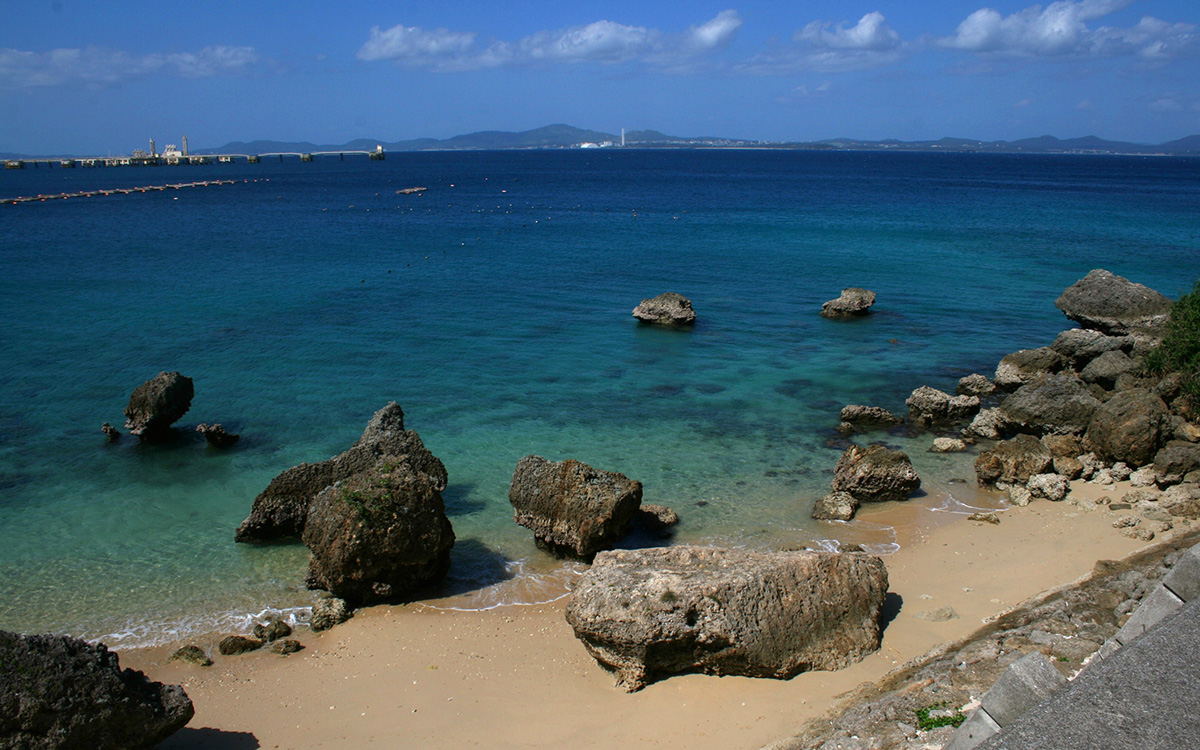 This island is about 8 kilometers in circumference and is located at the eastern extreme of Central Okinawa.
It can be found after passing through Henza Island and Miyagi Island.
Just after crossing Ikei Bridge from Miyagi Island you find the beautiful and shallow Ikei Beach, a place highly recommended for families because it has very safe swimming. Shower rooms and a shop are on hand, and a marine equipment rental service is also available.

If you go to the edge of the island you can also find tranquil sugarcane fields stretch out before you.
The officially-designated Nakabaru Ruins (a ruin of a pit dwelling house) is interesting as well. 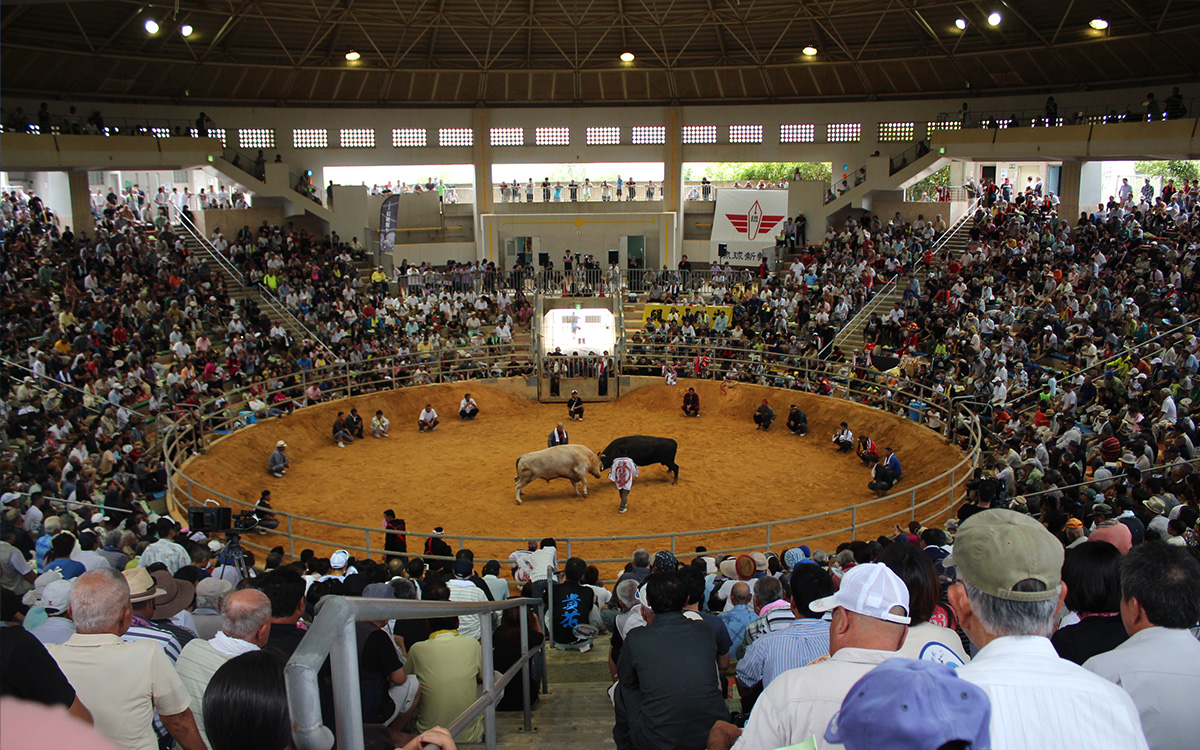 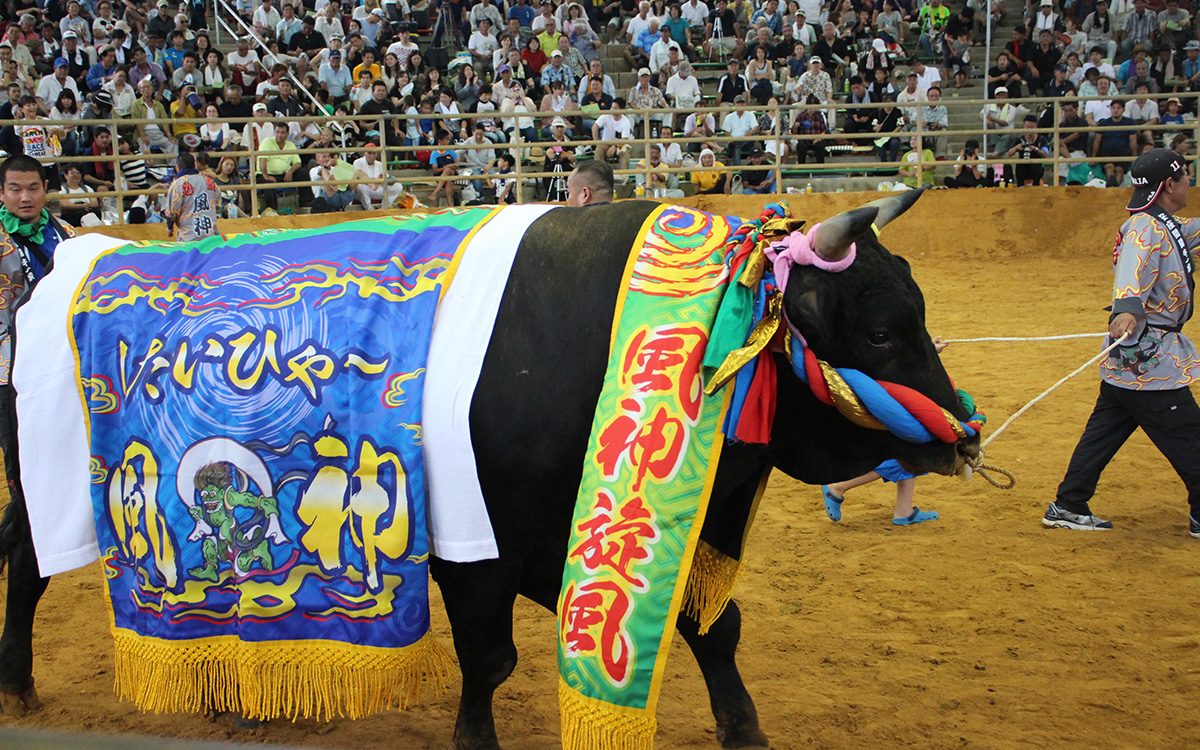 Okinawan traditional entertainment, the world of bullfighting
Bullfighting is called Ushiorase, and it is a popular pastime in Okinawa. It has a long history, and it has been inherited as a form of entertainment. Bullfighting started in the late Meiji period, but it was suspended during WWII. After resumed in 1947, it gained a wide range of fans by producing star bulls and being broadcasted on TV. Although not as popular as it once was, ushiorase has an established role as the core of main festivals in the Central Okinawa area. In particular, Uruma City is known as the home of for bullfighting in Okinawa, and bullfighting is attracting the young, women and foreigner visitors in recent years.

Many tournaments are held at Ishikawa Multipurpose Dome in Ishikawa, Uruma City. The first dome-covered bullring in Okinawa which was built in 2007. Since then, about 20 bullfighting tournaments including “All Okinawa Bullfighting Tournaments” sponsored by Okinawa Prefectural Bullfighting Federation are held at the dome.

Due to the completion of the Ishikawa Multipurpose Dome, the number of events has reduced at the Agena Bullring in Uruma City which is one of Okinawa’s largest bullrings. Although tournaments are still held there once or twice a year. The world of bullfighting is deep, and the techniques, types of horns, different bull breeds, is fascinatingly detailed.

IshikawaBull Fighting Ring *Only in Japanese. 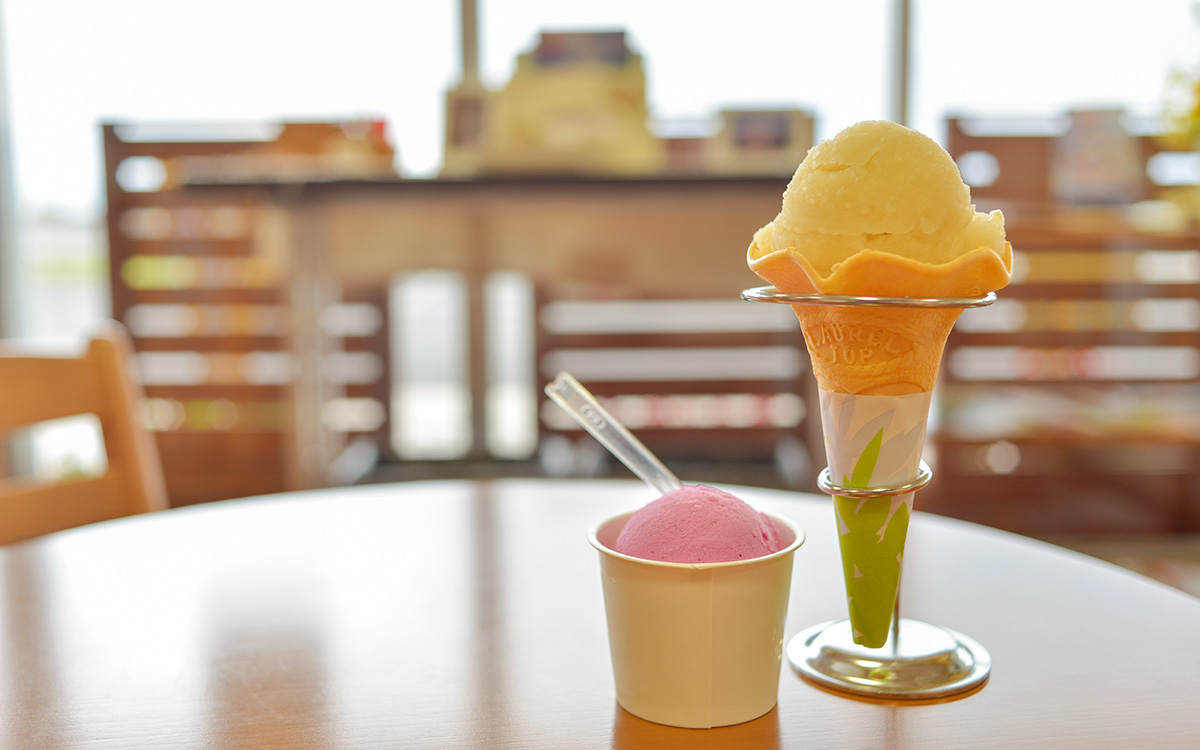 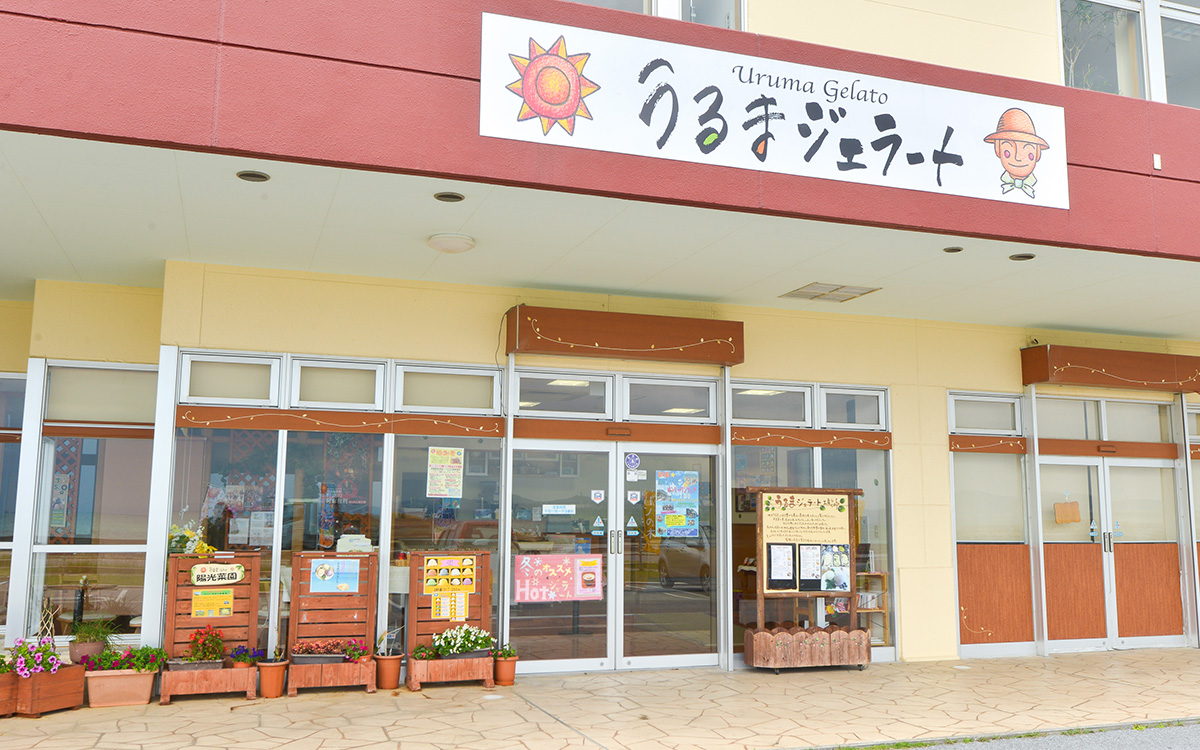 Enjoy Uruma Gelato with unique flavors
There is a gelato shop just before you enter the Kaichu-doro.
You can enjoy the distinctive flavors created by the owner which use vegetables and herbs produced by the owner’s husband. There are 12 kinds of flavors, including chocolate, Shekwasha (Taiwanese fragrant lemon), green tea and café mocha are on the regular menu. Furthermore, Nuchi Masu, organic tea produced by Yamashiro Tea Garden, sweet potatoes from Ikei Island, Okinawan peppers, a mix of pumpkins and sweet potatoes, local products of Uruma City and other flavors are also available. This is a good shop to stop by in the middle of a drive.

Uruma Gelato *Only in Japanese.